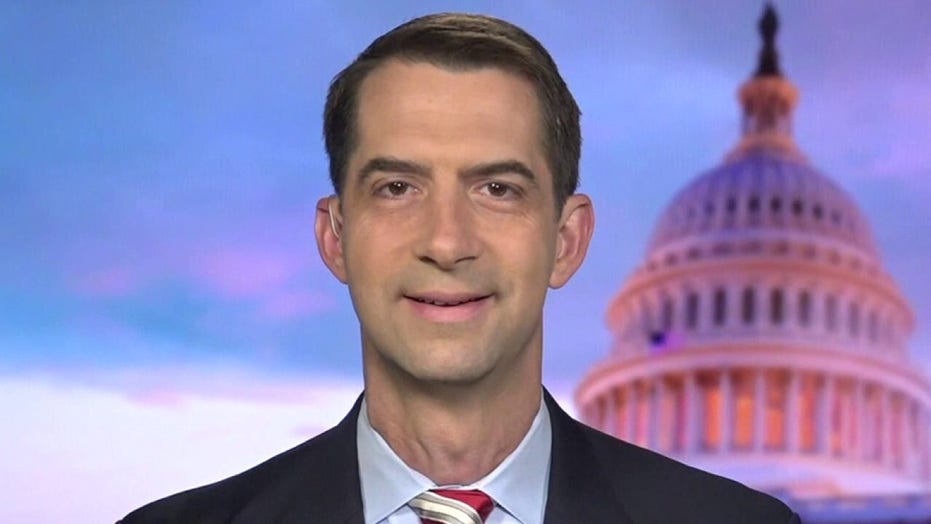 A Jacobin mob of left-wing thought police has risen up across our country. No statue, no movie, no cartoon is immune. Nor any op-ed. The New York Times, after publishing my op-ed about the Insurrection Act, capitulated to a woke mob of its employees.

But it’s not just the Times. I reveal here for the first time that the Twitter thought police also targeted me for expressing an opinion shared at that time by a majority of Americans. Here’s the behind-the-scenes story.

On June 1, Americans awoke to news of rioting and looting in our streets. In Washington alone, rioters burned an historic church, looted many businesses and defaced memorials to Abraham Lincoln and the veterans of World War II.

TIM GRAHAM: BIDEN'S SAFE SPACE – MEDIA ALL IN FOR FORMER VP IN 2020

First on television, then on Twitter, I noted that the National Guard and active-duty troops could be called out to support local police if necessary, as happened during the 1992 Los Angeles riots. “No quarter for insurrectionists, anarchists, rioters, and looters,” I wrote.

This was apparently too much for the professional umbrage-takers on Twitter. In high dudgeon, they exclaimed that “no quarter” once meant that a military force would take no prisoners, but instead shoot them.

Never mind that the phrase today is a common metaphor for a tough or merely unkind approach to a situation. For instance, former Democratic presidential candidate Pete Buttigieg and The New York Times have used the phrase in this way. Or that politics often employs the language of combat as metaphors: campaigns, battleground states, target races, air war and ground war, and so forth. And, of course, the exaggerated foolishness that I was literally calling for the arrest and summary execution of American citizens.

But a sense of proportion is not Twitter’s long suit. Within a few hours, a low-level employee in Twitter’s Washington office contacted some of my aides at random, claiming that my tweet violated the company’s policies. She also issued an ultimatum: delete the tweet or Twitter would permanently lock my account. She gave me only 30 minutes to comply.

My aide tried to reason with the employee. We offered to post a new tweet clarifying my meaning — which I did anyway — but the employee refused, insisting I had to delete the original tweet because some snowflakes had retweeted it.

Finally, we provided them some dictionary definitions of “no quarter.” She said that she would “take that back to our teams.”

It was clear, I should add, that this low-level employee was acting as a front for more senior officials at Twitter, whom one might expect would contact directly a sitting senator to discuss such a serious matter. It was equally clear that she avoided putting as much in writing as possible. Accountability is not Twitter’s long suit, either.

Twitter began as an open platform committed to the free exchange of ideas; over time, it increasingly has taken upon itself the role of politically correct censor of thought-crime by elected officials and ordinary citizens alike.

I called Twitter’s bluff, and 30 minutes came and went. I retained control of my account. Finally, almost two hours after the initial contact, the employee called to say Twitter would take “no action” against my account, but she was not authorized to say more.

Twitter’s arbitrary approach to political speech was only highlighted later that day, when the company flagged a tweet by Rep. Matt Gaetz, R-Fla., for violating its policies. My aide subsequently asked why Gaetz’s tweet was flagged since he’s also a legislator, not a head of state. She clarified that their policy covers all elected officials, but only if the account has 100,000 followers.

Twitter began as an open platform committed to the free exchange of ideas; over time, it increasingly has taken upon itself the role of politically correct censor of thought-crime by elected officials and ordinary citizens alike. Not surprisingly, the censorship falls overwhelmingly on conservatives.

Though Twitter purports to police only threats of violence, the company won’t even cooperate with law enforcement investigating death threats against me and other legislators. And the orthodoxy starts at the top: CEO Jack Dorsey reportedly unfollowed the Twitter account of The New York Times Opinion section after it published my op-ed.

The censorship, the hypocrisy and the arbitrary action are reasons why Twitter and other social-media platforms face so much scrutiny today. Many legislators want to limit or eliminate their liability protections under Section 230 of the Communications Decency Act. The companies also face potential antitrust actions by the Department of Justice and state attorneys general.

These social-media companies have improved the lives of Americans in many ways. But they should not be surprised public opinion is turning against them when they act as censors and moral scolds to millions of Americans. Nor should they expect to find many people rushing to their defense. In fact, to coin a phrase, those of us in their crosshairs might say:

No quarter for Big Tech censorship.