I’m clutching my injured side and running for my life through Raccoon City Police Department’s west corridor.

A zombie crashes through the window at the foot of the stairs ahead, and I can hear the claws of a licker clattering along the ceiling behind me, but it’s the stomps of the pursuing tyrant that have my heart pounding. Mr. X was sent here to smush my head. He’s unkillable, relentless, and he wears a narrow-brimmed hat like a deranged men’s rights activist.

I make it to the safe room around the corner just in time, the door swinging shut behind me, and I turn in time to see the tyrant cheekily poke his head around the door as if he’s looking to flog me some car insurance. Soon after, I hear him stomping away.

Mr. X hunts you incessantly whenever he’s around, but there are a few places where you can seek refuge. Like the xenomorph in Alien Isolation, he’s mostly unscripted and governed by set rules. This ruleset occasionally collides with other game systems to create funny, unexpected moments like the one above. You can also use his logic against him, drawing him to an area with gunfire before legging it to another wing of the station. Playing as Claire, you can get a silencer for your SMG that allows you to kneecap zombies in peace. 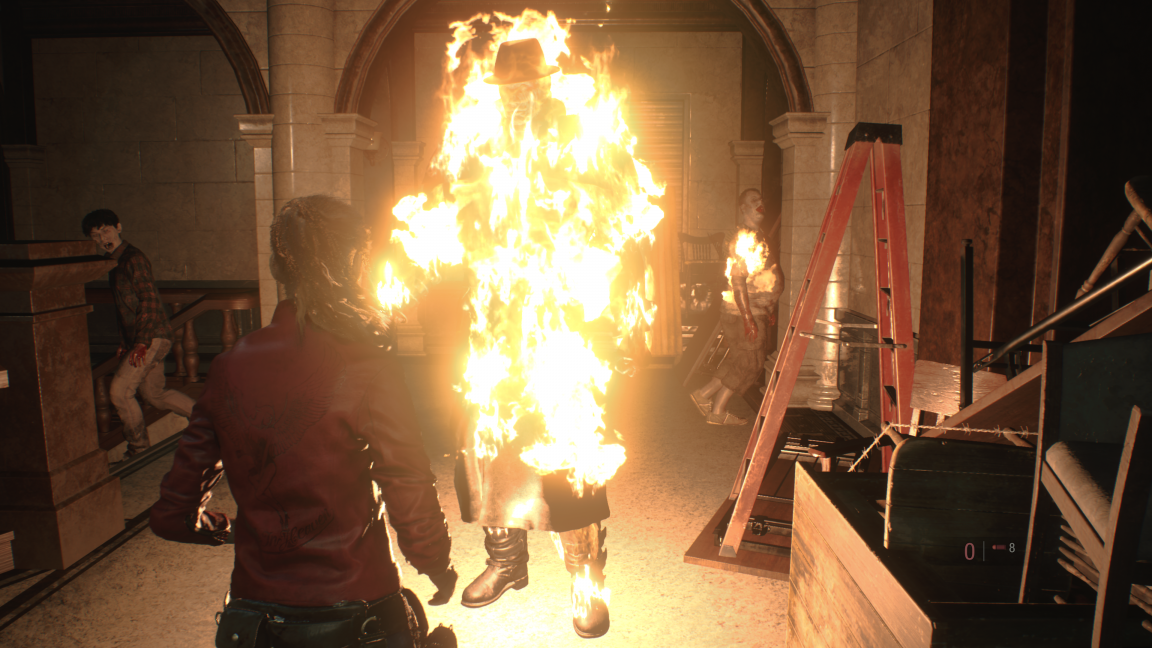 The first few times you face him, panic takes over. The strange layout and tight corridors of the police station - a former museum - means that running without a purpose equals death. You have to constantly consult your map. Limited inventory capacity also forces you to make choices as to what key items to carry at any time, since they will be taking the space of ammo and healing items. Wherever you go, you have to go with purpose. You’re forced to pay attention.

Because of this, you naturally learn the layout of this place as you play. Somehow, it only becomes more and more enjoyable as your mastery evolves. Resident Evil has always been about space. You’re in a hole and you can’t escape - you can only go deeper, into the parking garage, through the dog kennels, into the sewers, and finally, into the laboratory below. Even escaping the laboratory takes you deeper still, into the tunnels beneath the skin of the city. Along the way, you find shortcuts that loop back to earlier points and unlock new doors that increase your understanding, connecting those two locations like synapses firing in your brain. It’s intoxicating. 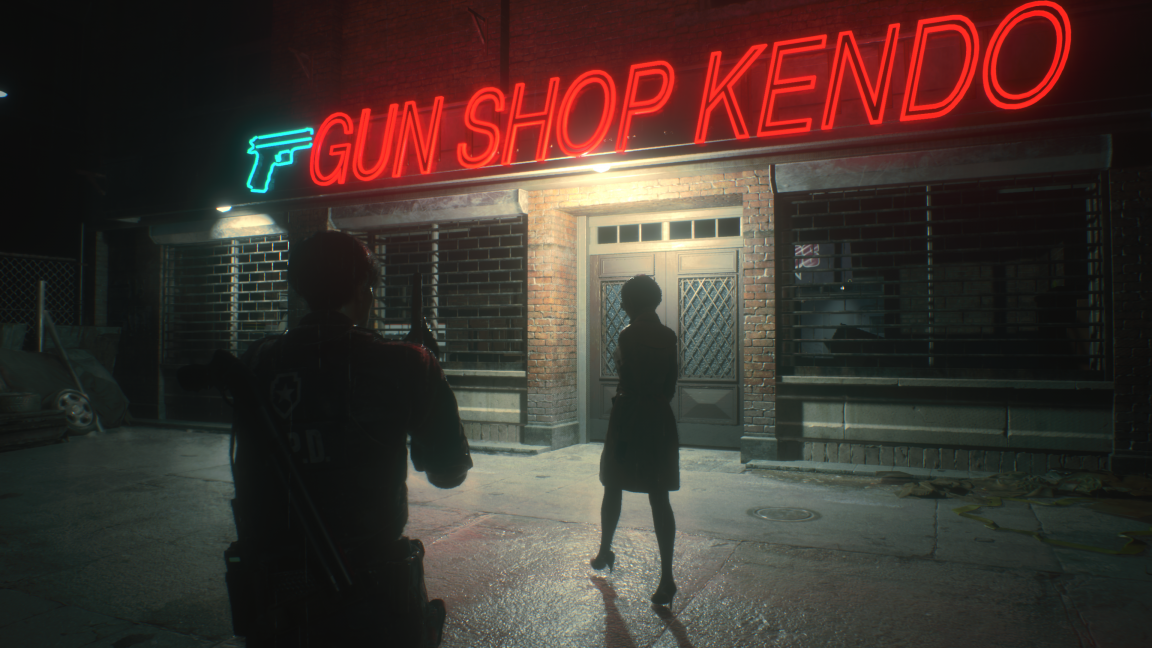 My first playthrough takes me almost nine hours, not counting cutscenes, inventory management, and map consultation. By my fifth playthrough, I’ve cut my time down to just over two hours. I’ve made notes of all the puzzle solutions, allowing me to skip out getting the clues. I know which items to go for and which to leave. I know that avoiding the dead is often the best course of action, and I know that I should board up as many of those goddamn west corridor windows as I can.

Then there are the differences between playthroughs. Claire and Leon both have access to different areas of the station, as well as different enemy configurations. These alter slightly depending on which you play as first. One minute you might be fully stocked on ammo and ready to take on anything, and the next you’re limping along with a knife. There seems to be some kind of magic algorithm under the hood that works to keep you teetering on the edge of running out of ammo, so you often feel like you just scraped through. 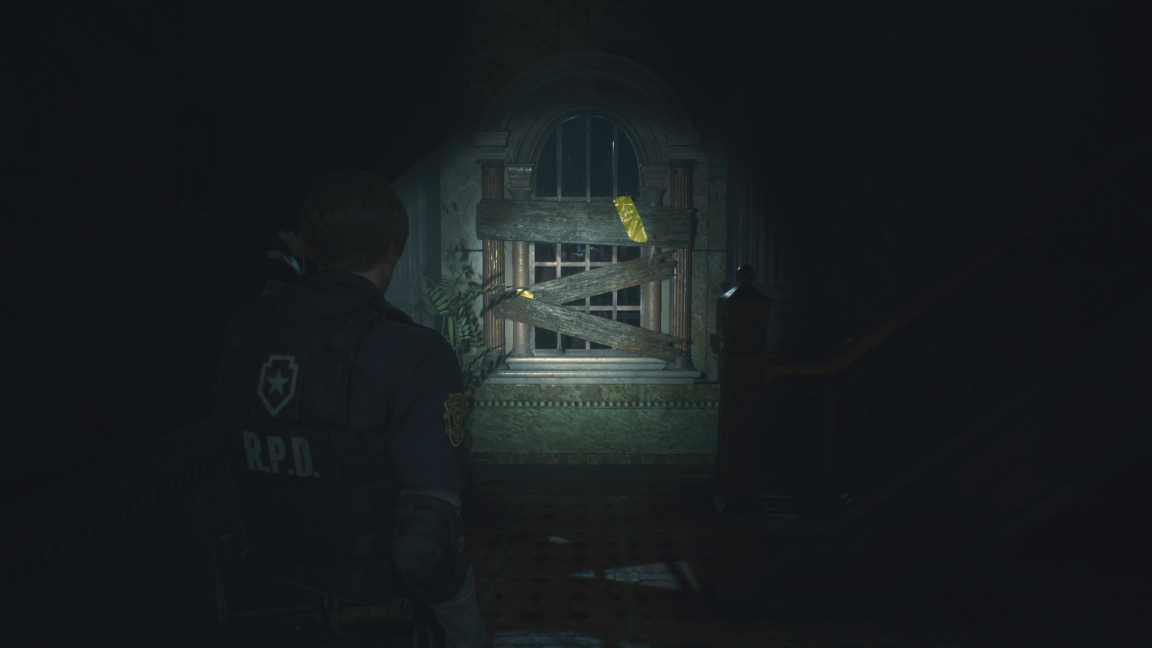 Even the way enemies behave keeps things exciting. Zombies move erratically, pacing past open doorways and teasing you with their rotten heads. When moving towards you, they sometimes change their gait, clawing at you in a burst of speed. The way their arms reach out to grab you can sometimes throw off your aim as well, the bullet tearing through their arm and causing the meat to fall off the bone like a slow cooked leg of lamb. Then there are the critical shots which occasionally see zombie heads explode in a single bullet, completely at random. The game is laced with things that can turn situations for and against you in a moment. That layer of unpredictability keeps things fresh through subsequent playthroughs.

That gore system is also the best ever devised. Each shot takes a chunk out of an approaching zombie, and they can take a hell of a beating. What’s scarier than a normal zombie? A zombie with no fucking face, still trying to chomp at you with its exposed jaw and empty eye sockets, of course. This works together with a weighty physics system that sees downed zombies drop with a thud, or fall with their arms stuck between the bars of a jail cell. I killed one zombie in an office and it keeled over on a table. Moments later, it reanimated and began crawling along the table towards me. I shat it. Then there’s that zombie - I call him Peanut - who lost all his limbs and laid on the floor, staring and clicking his jaw in my direction. 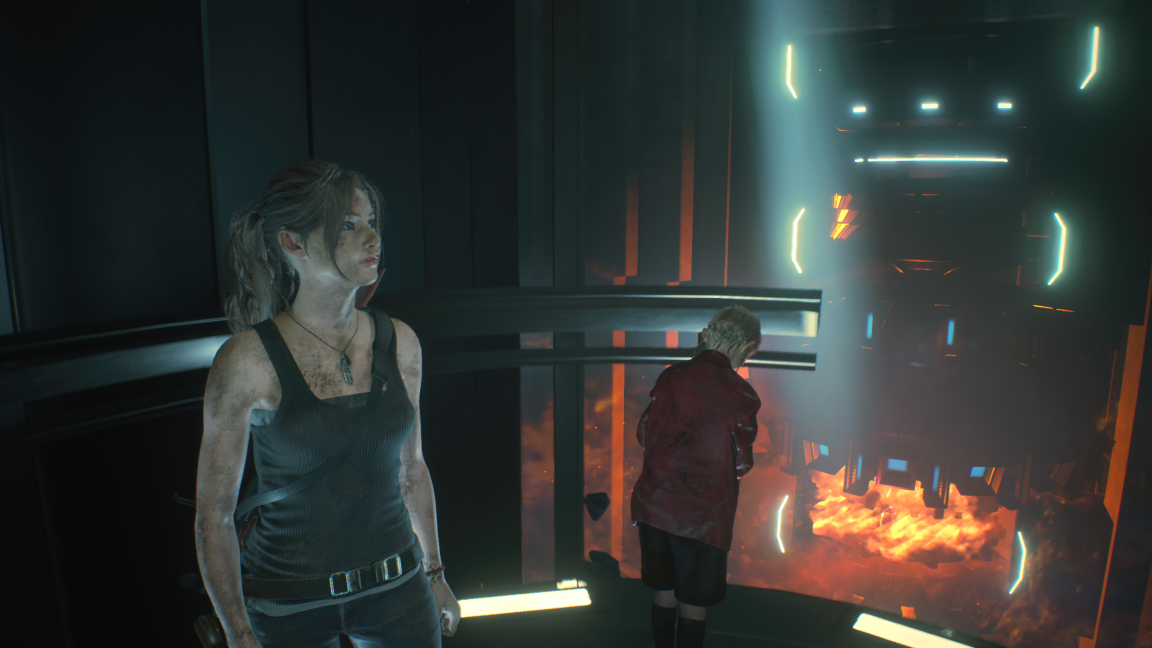 In all, I only really have one complaint, and it’s that I wish Leon and Claire would shut up. When aiming at an enemy, they have a set amount of voice lines where they react to the situation. Rather than sounding scared, they scream “fuck off” at zombies, and hurl other insults at the undead. At one point, Claire shouted “asshole” at a zombified dog. Still, it’s not enough to detract from a game this good.

For my money, Resident Evil 2 Remake is right up there with Resident Evil 4 as the best game in the series. It’s the perfect blend of nostalgia and the new, marrying a classic game with contemporary game design, and a prime candidate for those Game of the Year lists. In January! Capcom clearly has no chill.