Have you ever used a mod or console command to unlock a game’s camera? There’s an illicit thrill to floating high above a world, peeking behind the curtain of level design, unshackled by the boots you left down on the ground.

That’s what it’s like to play Disintegration. It is, put most simply, Ghost Recon Advanced Warfighter with a free camera. You control a squad of three or four soldiers, directing them to take cover, engage with specific enemies, or deploy grenades. But rather than plod along with them, you zip through the air on a Gravcycle - basically a Harley motorbike on helium.

The Gravcycle makes its presence known. It whines on take-off and shudders beneath your legs when you take it too high. Its handlebars bob under the gentle pressure of your on-screen hands. It belongs to the world below, which is crucial, since although you’re looking over the action, you’re also subject to it. Enemies shoot at you, and you’ll shoot back - swooping in low to shotgun opponents that your squad hasn’t finished off. 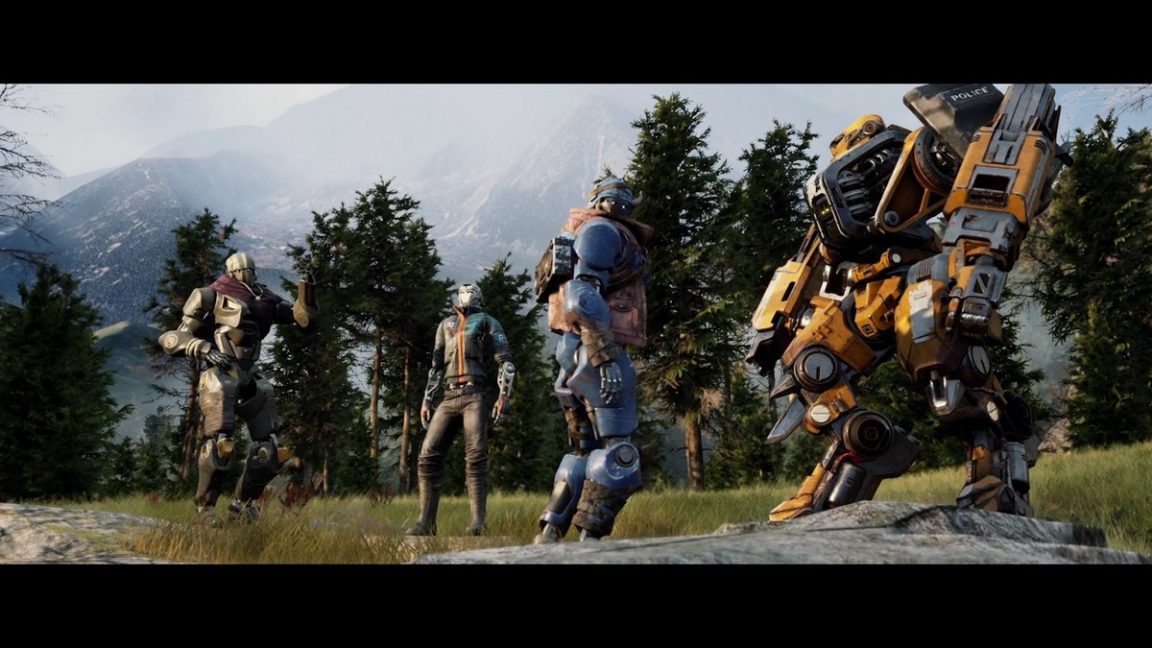 At times Disintegration feels like a run and gun FPS, at others like real-time strategy. As in the games released at the commercial highpoint of the tactical shooter - Rainbow Six: Vegas, Brothers in Arms, Republic Commando - you get to participate in the fight as well as direct it. It’s a great paradigm, and I’ve missed it.

It’s also not the only way that Disintegration evokes the mid ‘00s. Much has been made, quite rightly, of game director Marcus Lehto’s history at Bungie, where he defined the look of Halo’s universe. You don’t need to be a forensic biologist to spot the DNA here - one excursion in the campaign took my squad along an urban beach dotted with palm trees, with a view across the water to an angular skyline. It was so strikingly reminiscent of Halo 2’s battle for New Mombasa as to be distracting. The Matrix taught us that deja vu happens when they change something; in Disintegration’s case, they perhaps haven’t changed enough.

Like Halo 2, Disintegration takes place on a future Earth and stars a man in segmented armour he never takes to the dry cleaner’s. The difference is that this new Chief couldn’t remove his helmet if he wanted to. After a series of deadly pandemics - if you can imagine that - much of humanity has jumped ship from its vulnerable meat bodies, transferring squishy minds into robotic replacements.

Their new forms are impregnable by viruses, and immune to the ravages of age, but haven’t necessarily resulted in a net increase to happiness - they’ve created a new class war, between militant metal folk and the remaining Naturals. Some wonder whether their souls were left behind when their brains made the leap.

To developer V1 Interactive’s credit, most of this backstory simply rests in the background, freeing the campaign from the tedium of constant exposition. It’s an approach most effective on the battlefield where, as you scan for enemies and parts to level up your squad, you might scroll over a burned out “pre-Ascension” vehicle, or an incinerator designed for “the disposal of Natural shells post-canning”. 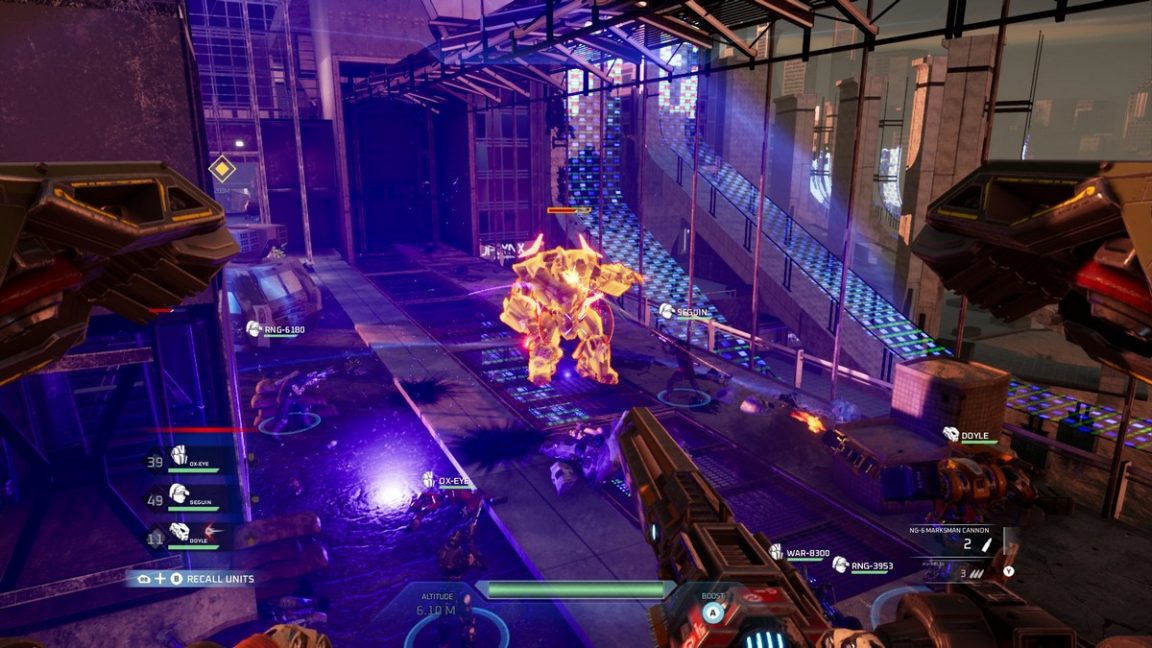 The soldiers in your squad, too, refer to their situation with the familiarity of people who’ve long since accepted its strangeness, which has the consequence of making the world feel lived in. It’s just a shame the stuff in the foreground isn’t so subtle. While I’ve warmed to characters like Agnes, a former salon owner who wears her blackness proudly over her armature, a lot of the dialogue leans heavily on attitude. Maybe squad relationships really are built on brushing egos, but it becomes tiresome to listen to after the sixth or seventh hour. I start to cringe every time the pizzicato strings kick in during cutscenes, knowing that indicates a light-hearted break in the action. The soundtrack suggests a funnier script than the one Disintegration has.

Nevertheless, all that blending of the spiritual and technological lends the levels a mystic grandeur. From your high vantage point, you’re well placed to appreciate the crashed capital ships, vast mountain lakes and snaking monorail tracks. V1 gets good value out of its maps, too, often reversing the flow and having you fight back through conquered areas from the opposite direction; some will balk at this backtracking, but I enjoyed looking at spaces anew to find appropriate cover spots and chokepoints. 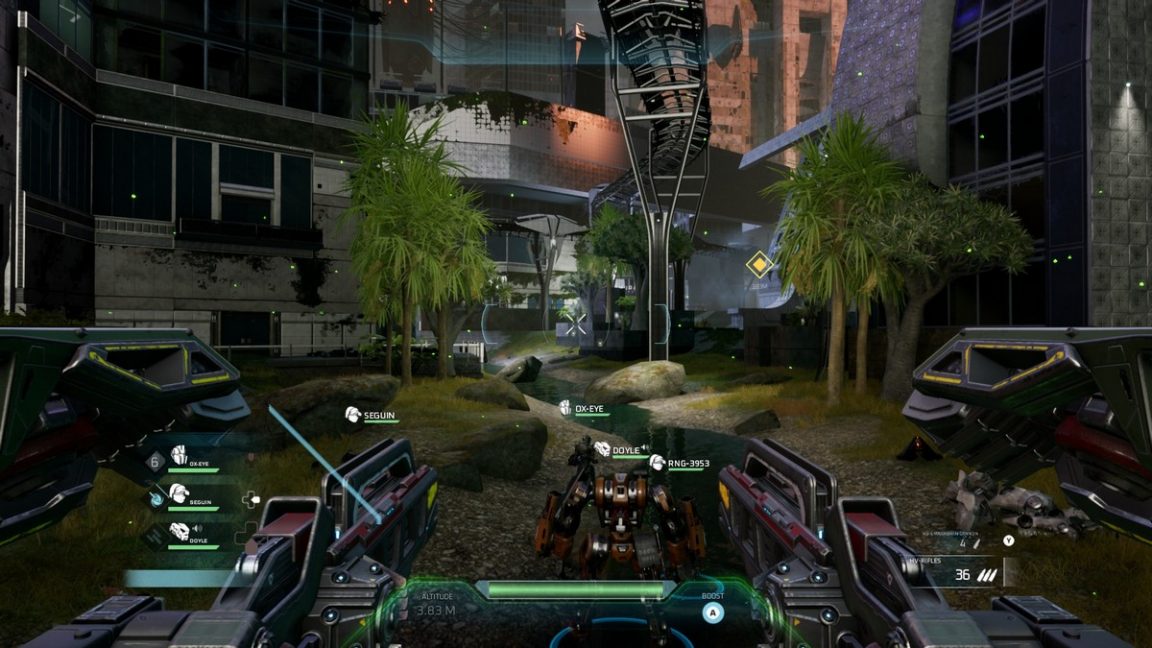 Since most of Disintegration’s strategy hinges on cooldown abilities, success often depends on timing; slowing a rushing robot horde with a temporal field as it’s funnelled up a staircase, or staggering a mech with a concussion grenade and then piling on the damage. Though there are only a few of these powers, they can be deployed in a pleasing variety of ways: the slow field used to decelerate a sniper’s rate of fire, for instance, or to extend the duration of a grenade’s concussion, or to hold enemies in one spot for a ground stomp.

Playing on Maverick difficulty - the intended level of challenge, though one step above the default - I had to juggle these abilities constantly to stay in the air. And at times, it got really tough: after one absurd mid-game difficulty spike, a character challenged me to complete the next mission without loading a checkpoint. The laugh that emerged from my throat was as hollow as an empty armature.

Given enough time, though, Disintegration’s hybrid oddness can click beautifully. You’ll have to forgive me for mentioning Halo one more time, since V1 does a marvelous job of recreating its uphill swim through a level; every time you’re battered back is an opportunity to reconsider your approach while your health recharges - a moment to devise new tactics before pushing against the current once more. 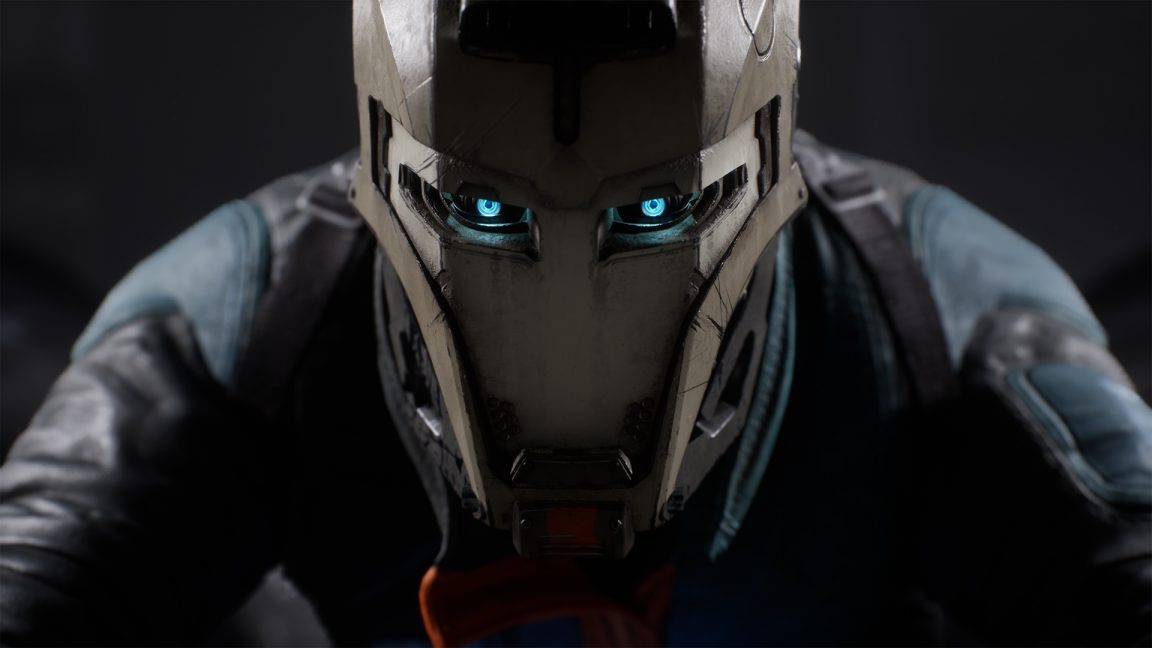 Whether players will stick around long enough to experience that push-and-pull satisfaction is another matter. While V1 has worked wonders with a small team, the limitations of its budget show in the interaction-light story hubs between levels - more Anthem than Mass Effect - and cutscenes that lack heft. Disintegration crashed to desktop just once in my time with it, but the consequences were excruciating: the game hadn’t preserved my checkpoints, and I lost half an hour of progress.

Disintegration is a warts-and-all exercise in genre nostalgia. The squad shooter has been missing in action for so long, and it’s a pleasure to have it back, with an even greater emphasis on tactics. But the gruff storytelling and rough edges are a reminder of what we were happy to leave behind in the mid ‘00s - along with ugg boots and The Black Eyed Peas’ My Humps.

Version tested: PC. A review copy was supplied by the publisher.