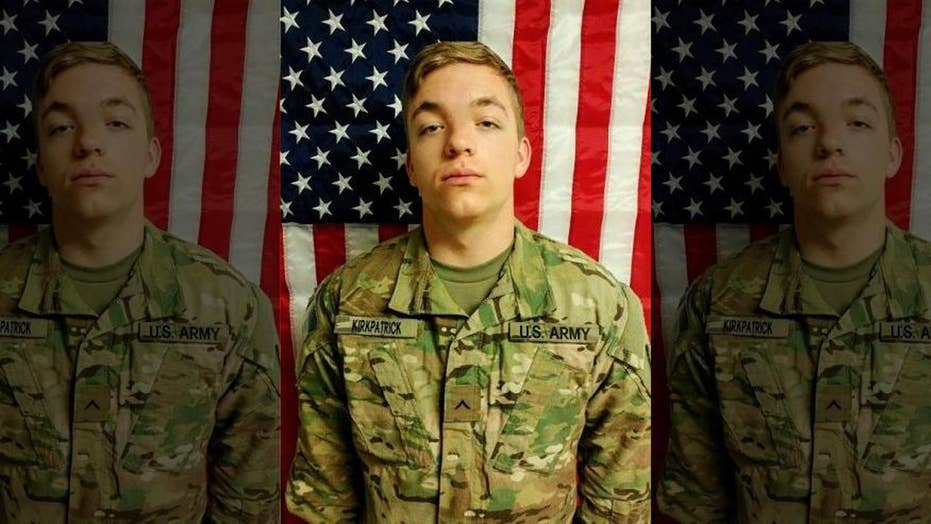 The Pentagon identified the U.S. soldier Wednesday who was killed in Afghanistan on Monday.

Pfc. Hansen Bradee Kirkpatrick, 19, of Wasilla, Alaska, was named as the fallen soldier who was supporting Operation Freedom Sentinel.

The soldier died from his wounds he received during an “indirect fire attack,” in the Helmand Province, the Defense Department said. Indirect fire is an attack with shells launched from a mortar.

Kirkpatrick was in a building when a Taliban mortar round struck the roof and exploded inside, Capt. Bill Selvin, a spokesman for U.S. forces in Afghanistan, told Fox News.

Soldiers returned fire after the explosion, killing two Taliban militants and wounding a few others.

Two other U.S. soldiers were wounded in the attack and sustained non-life-threatening injuries. They are being treated at a coalition medical facility.

"PFC Hansen Kirkpatrick served honorably as a mortarman in 1-36 Infantry, the Spartans," Maj. James C. Bithorn, executive officer of the Striker Brigade Combat Team, said. "He was a caring, disciplined, and intelligent young Soldier who daily lived the Spartan motto of 'Deeds Not Words.'"

Kirkpatrick's family has been notified and the Pentagon is investigating the incident.

"At a time when we remember the patriots who founded our nation in freedom, we are saddened by the loss of one of our comrades who was here protecting our freedom at home," General John Nicholson, Commander of the U.S. Forces-Afghanistan, said. "We will keep his family in our thoughts and prayers as we reflect on the sacrifice he and others have made to secure our freedoms and help make Afghanistan a better place."

The incident comes as the Pentagon is planning to deploy several thousand more troops to Afghanistan in an effort to roll back Taliban gains. An announcement is expected later this month.

The new Afghanistan strategy is believed to be similar to the ISIS fight in Syria and Iraq which puts troops closer to the front lines with the ability to call in airstrikes.

WIDOW GOES AFTER MONEY CANADA WILL GIVE EX-GITMO PRISONER

As of July 3, 2017, 40 Americans have been killed in Operation Freedom Sentinel, according to the Department of Defense.

At the end of the Obama administration, nearly 1,500 U.S. troops were pulled from Afghanistan. The addition of three to five thousand more troops makes up for that move, according to U.S. officials.