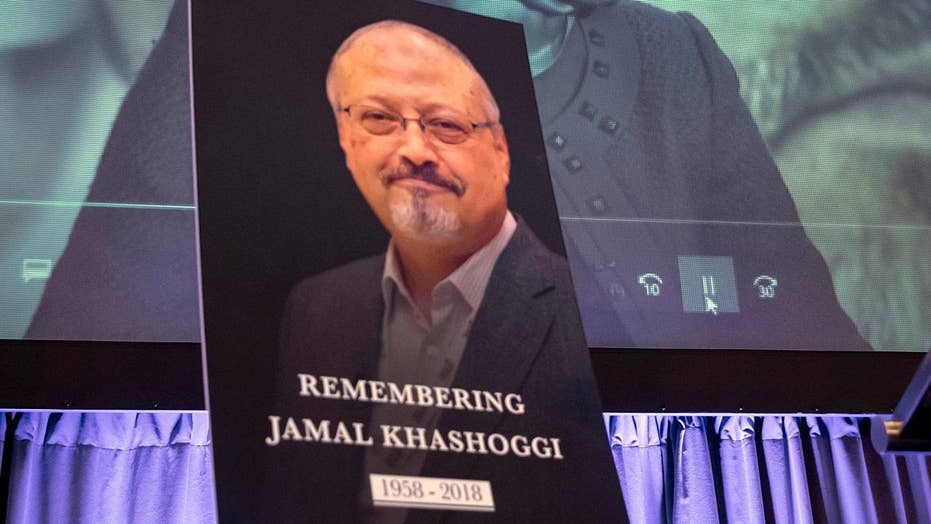 Five sentenced to die over Khashoggi killing in Saudi Arabia

Jamal Khashoggi’s onetime fiancée called for justice in a Turkish court Friday, as 20 Saudi officials were tried in absentia for the murder of the writer and activist two years ago in the Saudi Consulate in Istanbul.

Hatice Cengiz spoke at the opening of the trial and said her fiancée was lured to his death through “a great betrayal and deception,” the state-run Anadolu Agency reported.

Cengiz had to pause a few times to stop her voice from breaking, The Guardian reported.

“This has been an exhausting process both mentally and morally,” Cengiz reportedly said speaking outside the courthouse following the three-hour hearing.

She expressed confidence in the Turkish judicial system, according to the BBC.

"Our search for justice will continue in Turkey as well as in everywhere we can," Cengiz reportedly said.

Two former aides of Saudi Crown Prince Mohammed bin Salman, who has denied any involvement, and 18 other Saudi nationals have been charged in connection to the killing of the activist and Washington Post columnist. The defendants were not present at the trial because Saudi Arabia rejected Turkish calls for their extradition.

Eleven of the men were put on trial behind closed doors in Saudi Arabia, but the proceedings in Riyadh have been widely criticized as a whitewash.

U.N. Special Rapporteur Agnes Callamard, who concluded that Khashoggi was "the victim of a deliberate, premeditated execution" for which the Saudi state was responsible, attended Friday’s hearing in Turkey, the BBC reported.

"We have not moved the killing of Jamal Khashoggi into a formal setting that the international community can recognize, because the trial in Saudi Arabia could not be given credibility and legitimacy," Callamard reportedly said.

She went on to say, "Here for the first time, we have the hit men being indicted and we have a number of those have commissioned the crime."

Hatice Cengiz, centre back to camera, the fiancee of slain Saudi journalist Jamal Kashoggi, talks to members of the media outside a court in Istanbul, Friday, July 3, 2020. (AP Photo/Emrah Gurel)

The journalist’s remains have not yet been found and the trial in Turkey could provide new information, evidence and insight.

Khashoggi went to the Istanbul consulate in October 2018 for an appointment to pick up documents that would allow him to marry his Turkish fiancée, but he never walked out.

Cengiz was waiting for Khashoggi outside the consulate and notified authorities when he didn’t come out.

On Friday, the court also heard testimony from six local Turkish employees of the Saudi Consulate with the majority saying they did not see Khashoggi. One employee said he had a brief conversation with him when he first entered the building, however, he did not see him again after that encounter.

A team of 15 Saudi agents, including someone who worked for the crown prince’s office and a forensic doctor, had flown to Turkey to meet Khashoggi inside the consulate. Turkey, a rival of Saudi Arabia, apparently had the Saudi Consulate bugged and has shared audio of the killing with the CIA, among other agencies. Turkish officials allege the journalist was killed and then dismembered with a bone saw.

Initially, Saudi Arabia provided shifting accounts about Khashoggi’s disappearance. Following the Turkish audio leaks, the kingdom eventually settled on the explanation that the he was killed by rogue officials in a fight.

According to a 2018 report, the CIA determined Khashoggi's death came at the directive of Salman.

Prior to his murder, Khashoggi had written critically of Saudi Arabia's crown prince in the Washington Post. He lived in exile in the United States for about a year as Salman oversaw a crackdown in Saudi Arabia on human rights activists, writers and critics of the war in Yemen.

The trial was adjourned until the end of November. Turkish prosecutors have demanded that the defendants be sentenced to life in prison, if convicted.

In May, Khashoggi’s family members said they had forgiven his killers. The pardon gave legal reprieve to the five government agents who were sentenced to death in Riyadh.