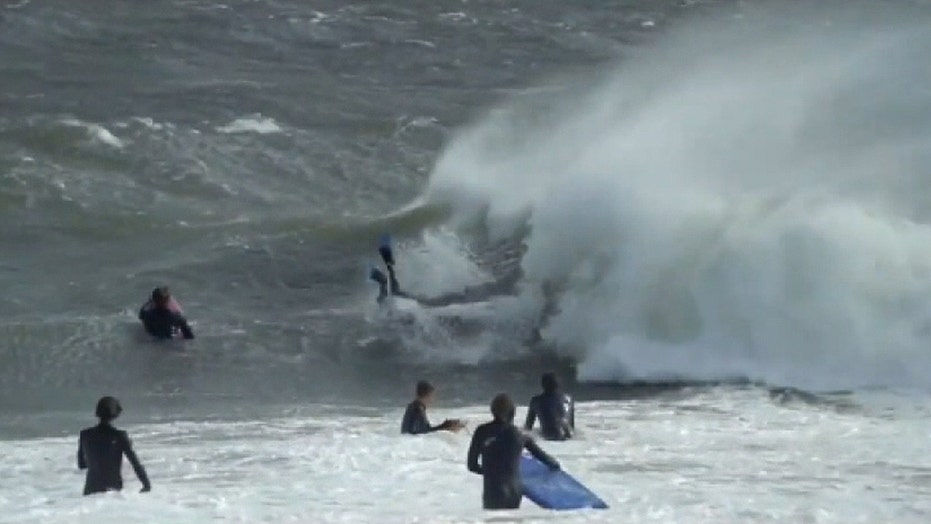 Raw Video: Huge waves off the coast of Sydney attracted some daredevil surfers and bodyboarders.

Talk about a wall of water.

A storm system off the eastern coast of Australia churned up massive swells on Wednesday, as Sydney's coastline was battered with large waves that surfers tried to take advantage of.

Australia's Bureau of Meteorology issued a hazardous surf warning for New South Wales state through Thursday due to the treacherous conditions.

'EXTRAORDINARY' INCREASE OF COASTAL FLOODING IN US DUE TO SEA LEVEL RISE, REPORT SAYS

"Surf and swell conditions are expected to be hazardous for coastal activities such as rock fishing, boating and swimming," the agency said.

Waves peaked at a height of 38 feet off Sydney on Tuesday night.

Video posted to Twitter by Natali Pearson showed an ocean pool at Maroubra in Sydney’s east being swallowed by frequent large waves.

The conditions may not have been suitable for swimming, but surfers took advantage of the wild waves.

Many could be seen in photos and videos out in the water, with some falling and wiping out. No injuries or deaths have been reported, however.

One close call did happen at Avoca Beach in New South Wales, when a “freak wave” sent people running.

Footage shared to Facebook by Copacabana Rural Fire Brigade shows the wave hitting the shore as beachgoers try to escape its path.

According to officials, the Central Coast Council assessed the area as there was damage to the foreshore and car park.

"There is still a hazardous surf warning for much of the NSW Coast," the fire brigade said.

The storm system that churned up the wild waves is known as an “east coast low” by the weather bureau, which frequently occurs during autumn and winter and is one of the more dangerous weather events to affect Australia's East Coast.