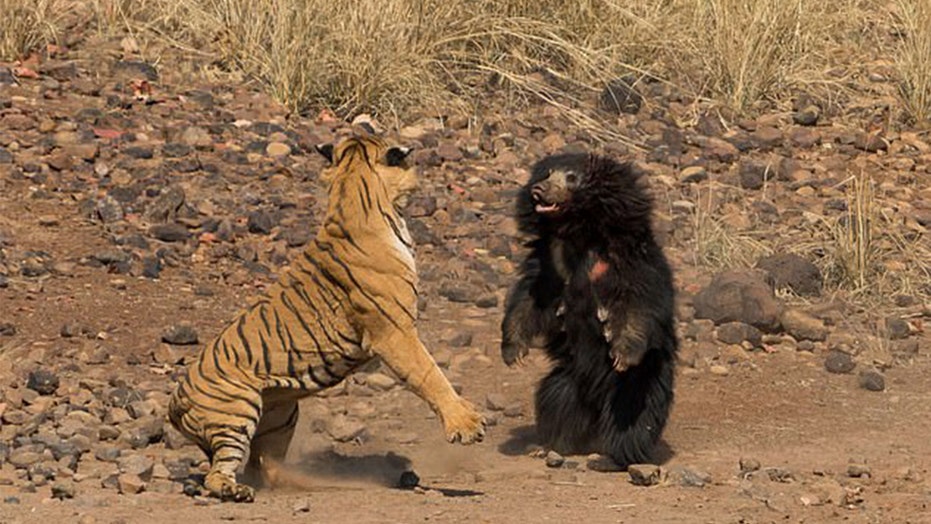 The 600-pound tiger darts into some foliage, then sounds emerge of an animal crying out as it struggles against its would-be prey, a new video shows.

A few moments later, it emerges wrestling a sloth bear – about half its size but still one of the world’s fiercest ursines.

After a gutwrenching, life-and-death struggle, the tiger appears to grow too tired to maintain its death grip on the bear, which is pinned down and howling in distress.

Then it breaks free and counterattacks.

Images from the encounter show the two tussling in the dirt near a highly coveted water source. After a 30-minute brawl, they leave in opposite directions.

The images were taken at the Todoba Andhari Tiger Reserve in India, by Arpit Parekh, a 33-year-old tour guide.

“The tiger was able to sink his teeth into the bear and we thought the bear would die, but the tiger soon became exhausted and let go,” he told the Daily Mail. “The bleeding sloth bear charged at the tiger and bit him on the leg. Finally after a grueling battle, the two behemoths decided to call it quits and walked away from each other.”

But not before they shared plenting of clawing, biting and howling in between.

Sloth bears can grow up to about 6 feet tall and weigh between 200 and 300 pounds, according to the Smithsonian Institution. The one in the images appears to be on the larger end of that scale.

They’re omnivorous creatures that primarily eat termites, ants and other insects, as well as fruit, according to the institute. They’ve also been known to knock down honeycombs and consume their honey.

Despite their diets, they have large claws and sharp canine teeth used to fend off predators, which include big cats, jackals, wolves and other types of bears.

Specifically, they’ve evolved to fight off tigers, according to Wildlife SOS, an Indian conversation group.

Sloth bears respond to predators aggressively.National Geographic reported in May that they are “one of the deadliest animals in India,” purportedly linked to more human deaths per capita than any other species of bear.

They also can be found in Sri Lanka and southern Nepal, according to the Smithsonian, and may be present in small numbers in Bhutan and possibly Bangladesh.

Michael Ruiz is a U.S. and World Reporter for Fox News.