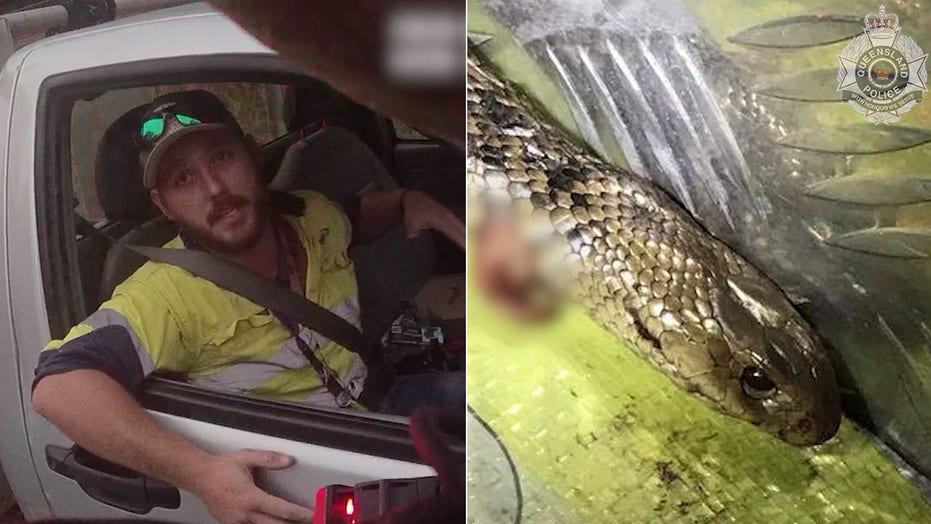 An Australian man fought off one of the world’s deadliest snakes with only a knife and a seatbelt after the serpent coiled around his leg while driving on a highway, authorities said.

Queensland police pulled over the 27-year-old man speeding at 76 mph (123 km/h) on Dawson Highway around 5 p.m. local time on June 15, police said in a statement Tuesday.

MYSTERY OF HOW FLYING SNAKES MOVE IS SOLVED BY SCIENTISTS

The driver, identified only as “Jimmy,” claimed a brown snake had slithered its way through his truck’s gear shift and attacked him.

“I’m driving along at 100 km/h (62 mph), and I just started to brake,” Jimmy said. “And the more I moved my legs … it started to wrap around me. Its head just started striking at the (driver’s seat) chair, between my legs.”

Jimmy told police he used a knife and his seatbelt to kill the eastern brown snake, which is one of the world’s deadliest, before speeding to the nearest hospital. He appeared in a state of shock, telling the officer he feared for his life and wasn’t sure whether the snake bit him.

"I think it has bitten me, it was in the car with me,” he can be heard saying in police video released Tuesday. “You can feel my heart, mate.”

Jimmy told police he killed the snake and was rushing to a hospital. (Queensland Police Service)

The officer found the dead snake in the back of Jimmy’s truck and called for help from his patrol car.

"Although the traffic officer had heard his fair share of excuses for speeding, he soon realized this was not just another colorful tale and promptly sought medical assistance," the police statement said.

Paramedics arrived and determined that while Jimmy had not been bitten, he was suffering from shock.

“It was pretty terrifying,” Jimmy said of the ordeal. “I’ve never been so happy to see red and blue lights.”