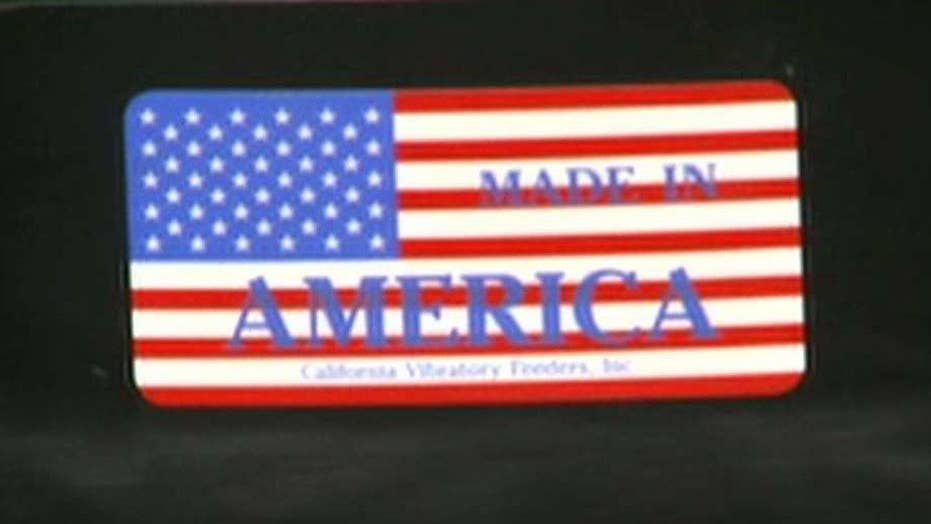 Law limits US company from using 'Made in America' label

Dozens of manufacturers support a bill in Congress to establish a more flexible U.S. standard enforced by the FTC; William La Jeunesse reports from Ontario, California

Tony Maglica started Maglite out of a tiny garage in Los Angeles in 1960. Today it's a multimillion dollar business that's struggling because of cheap imports and a California law that limits his ability to label his flashlights “Made in America.”

“People say: 'Why don't you mark Made in USA?’ I say I can't, I got sued,” said Maglica, dressed in U.S.-made sneakers and lab coat. “This company is born here and will die here, just like me. I’m not going to China. I am not going out of this country.”

From massive flats of sheets aluminum, Maglica fabricates everything in the Maglite product line from U.S.-sourced materials -- except two items. A microchip from Asia and a rubber seal from Taiwan.

“I tried to get everything in the U.S., but we don’t make this stuff anymore,” he said. “I tried, it wasn’t available.”

A few years ago, Maglite got sued under a California law that stipulated a near 100 percent U.S. content standard for products labeled "Made in America." He lost because of the rubber seals, after spending millions, he said, in legal bills.

Leatherman, the Oregon-based maker of multi-tools, got sued for a single knife blade. Quickset, which makes door locks, got sued for a couple of screws made in Mexico. A Utah company that makes $1,500 basketball sets got sued for a few foreign-sourced rivets and a nylon net.

“It is unrealistic, given the global sourcing of components, especially for mechanical or electro-mechanical product,” said Maglite attorney Jerry Reilly. “Problem is if you insist on that level of content you are going to kill your own market. You won’t be able to sell your product at a quality you need at a price point the public will accept.”

Richard Holober of the Consumer Federation of California disagrees.

“If it's a question of cutting corners, saving money, and increasing profits, which is often really the case, then it shouldn't bear a label that isn't honest and truthful,” he said. “If a product says ‘Made in the USA' it should be genuinely made in the USA.”

The California statute, passed in 1961, was designed to protect U.S. workers from cheap Japanese imports. After trial lawyers exploited the law, the content requirement was reduced from 100 to 95 percent, but it remained a strict liability statute, meaning losers must pay full damages. Rather than risk a multimillion dollar judgement in a class-action lawsuit, most companies avoid the labeling altogether.

Yet, according to a Boston Consulting Group study, up to 80 percent of U.S. consumers say they will pay more for a U.S.-made product.

Reilly says their problem is getting it into U.S. stores.

With Mexican and Chinese imports selling wholesale for a few dollars, retailers complain they can’t make enough money on a higher priced Maglite since consumers use the cheaper imports as their comparative price point.

“If domestic makers can’t compete, they will disappear, and that’s why I think you can’t find some U.S. companies to make parts anymore,” he said.

Maglite and a dozen other U.S. manufacturers support a bipartisan bill in Congress, The Reinforcing American Made Products Act of 2017..SB 118, that would set an “all or virtually all” content standard enforced by the Federal Trade Commission. This would override state statutes like the one in California.

Born in New York but raised in Croatia, Maglica says he came to the U.S. without a penny in his pocket, but took a job sewing clothes after WWII. At one time, Maglite employed 1,100 workers and sales totaled more than $100 million. Today, the company employs half that number and is losing money trying to compete with its Chinese and Mexican imports.