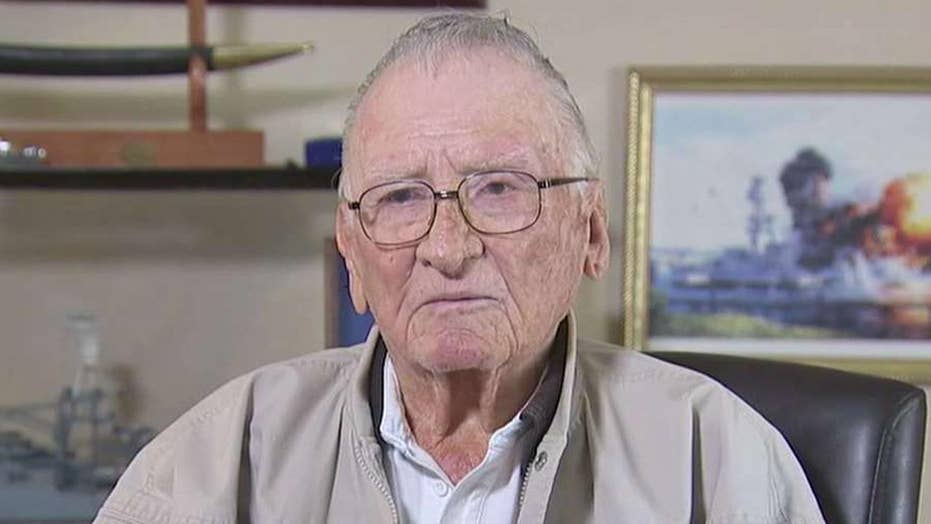 Pearl Harbor veteran to head to Washington to press lawmakers to honor man who saved his life; Lucas Tomlinson reports from the Pentagon

"This is where I was," says the 95-year-old Navy veteran pointing to his battle station on a model of the famous warship at his home in Colorado Springs, Colorado.

“We got hit with the big bomb and that exploded like a million pounds of ammunition. The fireball went about sixty, seventy feet in the air,” said Stratton, describing Japan’s surprise attack on December 7, 1941.

“The explosion could have taken us away, but it didn't and thank God we made it across,” he added.

In an interview with Fox News, Stratton told the story of the man who passed him the vital lifeline to help him and five other USS Arizona sailors make it to safety.

Trapped aboard the sinking Arizona, Stratton and the others managed to escape the carnage, which killed 1,177 of his shipmates, with the help of a fellow sailor who threw them a lifeline from his own ship moored next to Arizona.

With burns over 60 percent of his body, Stratton had to escape his burning warship.

“We proceeded to go hand over hand across the line about seventy feet,” said Stratton. Today, he doesn’t have fingerprints and carries scars across his body, a daily reminder of the horrors he endured at Pearl Harbor.

The toughest part was reaching the middle of the sagging line stretched across the two ships, and climbing up to the other ship.

“He kept saying, "Come on sailor! You can make it," recalled Stratton about his rescuer, who remained a mystery for sixty years.

The man who rescued Stratton and his fellow sailors that day: Joe George.

In his book..."All the Gallant Men," Stratton described George as "perhaps the strongest man in the harbor, an All-Navy Boxer."

Stratton says George disobeyed his captain's order and threw Stratton the line that would save his life.

Stratton's granddaughter,Nikki, says she owes her life, in addition to her grandfather's, to that young sailor's heroic actions.

“We have four generations here because of that man. We have 14 people in our family who wouldn’t necessarily be here without Joe George,” said Nikki Stratton.

“We just kept asking, asking and asking and finally someone was able to dig through some of the archives and some of the interviews of the sailors about what happened that day and we found the name Joe George,” she said.

His family asked the Navy to investigate his rescue and dig up interviews from the sailors who were at Pearl Harbor.

In 2001, Donald Stratton was attending his 60th reunion of Pearl Harbor survivors when he learned the identity of the man who rescued him. Sadly, Stratton never had a chance to thank his hero for saving his life. Joe George died in 1996.

More than 75 years later, Stratton wants him finally recognized for his valor.

“He saved six people's lives and he didn't get anything,” said Stratton. “Somebody in Washington should have the guts and honor to take care of that.”

George’s daughter, Joe Ann Taylor, grew up in the Bay area not knowing about her father’s heroics until her husband Gary, a Vietnam veteran, spoke to her father about that day.

George also gave an oral history to what is now the University of North Texas recalling the attack on Pearl Harbor in the late 70s.

“It’s typical of the World War II generation, he just never talked about himself,” said Joe Ann from her home in Cabot, Arkansas.

“It is a wonderful thing my father did.  I am always overwhelmed by the story.  Finding out what he did and how he did it--he did his duty, and it’s a shame he has never been recognized for it.”

Donald Stratton feels so strongly that Joe George should be awarded a medal that he and another living USS Arizona survivor, 96-year old Lauren Bruner, who was with Donald Stratton that day aboard  the Arizona and also made it across that lifeline to safety, are planning to come to Washington with their families later this month to press lawmakers.

The Stratton family has set up a website USS Arizona Final Salute  to help defray costs of the trip to Washington and raise money for other USS Arizona survivors to attend a future reunion in Hawaii next December.

Stratton and Bruner plan to meet Sens. Tom Cotton, R-Ark., Corey Garner, R-Colo., and Jeff Flake, R-Ariz.  They also have a meeting with the Navy’s top officer, Adm. John Richardson at the Pentagon and hope to meet the chairman of the Joint Chiefs of Staff and the defense secretary.