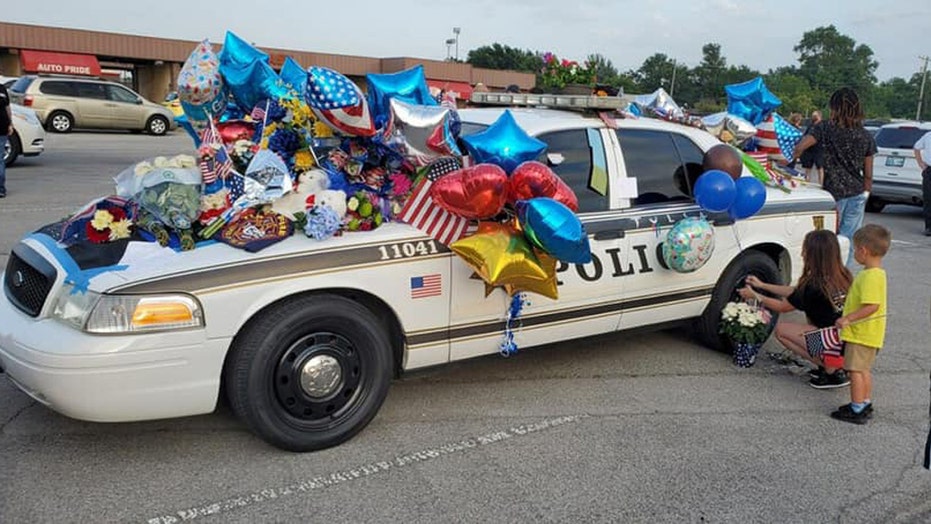 America Together: Volunteers help clean up communities after riots

Hundreds of people attended a prayer vigil as the Tulsa community rallied to show support for two police officers fighting for their lives after they were shot during a traffic stop, according to a report.

The vigil was Monday evening, after rookie officer Aurash Zarkeshan and Sgt. Craig Johnson were each shot in the head and critically injured early that morning, Fox 23 Tulsa reported.

“I’ll try not to cry,” one of the attendees told the station.

The woman has a son who is a Tulsa cop assigned to the Mingo Valley Division, where Zarkeshan and Johnson worked.

The Tulsa Police Department thanked the community for its show of support after two police officers were shot during a traffic stop. (Tulsa Fraternal Order of Police)

“This is for the officers who put their lives on the line every single day, every shift they come out and we want them to know that we love and support them.”

A parked Mingo Valley Division patrol car became a makeshift memorial for Zarkeshan and Johnson, and throughout the day, people filled it with balloons, flags, toy stuffed animals and flowers.

Among those offering support was Black Lives Matter activist Tykebrean Natral Cheshier, according to the station. She placed get well cards and flowers on the vehicle.

“Not really good at funerals and sad things, just, hey, the community loves you and I’m sorry for what’s going on here, sorry for what happened,” Cheshier told the station.

“There have been so many people coming out to support our officers, we are grateful for each and every one of you,” the post said.

“As I’ve spoken with police overnight and into this morning, we can’t help but see the work of the national anti-police narrative here,” Tulsa Fraternal Order of Police Chairman Jerad Lindsey wrote on Facebook.

"We must recognize the real impact of anti-police rhetoric and take real action to stop violence against police."

But We The People Oklahoma, a self-described group of "community activists, expressing our First Amendment Rights," called the union statement “irresponsible.”

Police said a struggle ensued when Ware refused an order to get out of the vehicle.

Fox 23 reported that during the struggle Johnson tried to subdue Ware with a Taser and pepper spray to no avail.

The officers were then shot when Ware reached under his seat for a handgun and fired three times, the station reported.

Police said two of the bullets struck Johnson who was shot three more times as he lay on the ground and Ware stood over him, according to the station.

Police said Ware fled the scene after calling a friend to come pick him up.

He was eventually caught after manhunt. His friend, Michael Hall, 29, was arrested on an accessory charge.

Local media reported that Ware has a long criminal record.