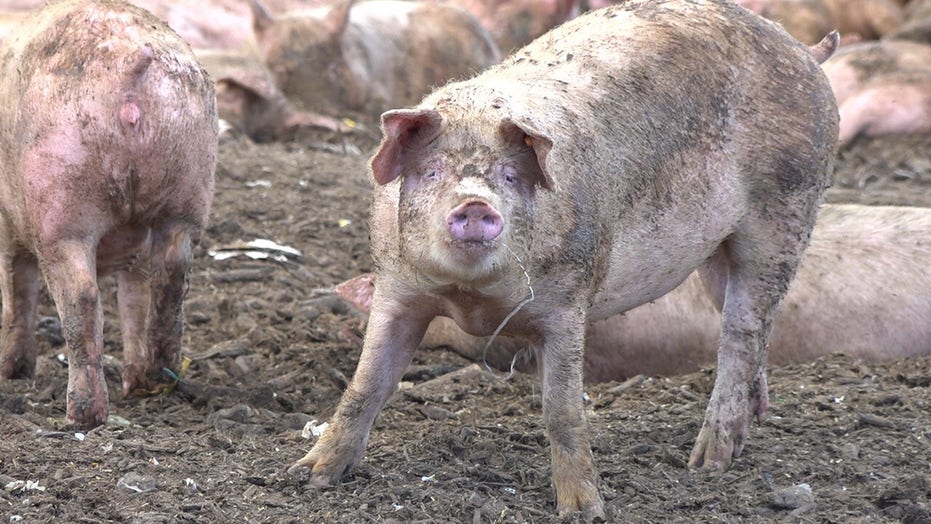 About 90 percent of the feed for Las Vegas Livestock, a small pig farm in Nevada, came from food scraps from casinos — everything from steak to lobster to candy. But when COVID-19 forced the Strip to close, the food supply stopped.

Coronavirus has been especially tough on farmers, and not only from an economic standpoint: They face the angst of slaughtering millions of animals that will not make it to the nation's food supply.

"With large operations dominating the industry, it makes it hard to do anything else (but discard) the animals. When commercial hogs reach the finished weight, the houses that they are in are very full," said Allen Williams, a regenerative farmer and owner of Joyce Farms near Starkville, Mississippi, told Fox News.

"Once they get crowded, then disease, bullying, suffocation, waste management, odor management and a host of other problems occur."

Since stringent lockdowns took hold in late March, shuttering schools, hotels, restaurants and stores, the traditional supply chain for meat and poultry has been upended.

"Farmers have nowhere to go if the packers are not able to buy and slaughter them. The farmers cannot legally harvest and sell the meat from the pigs to the consumer. It becomes a matter of space," said Williams.

Young female pigs stand in pen at a hog farm in Smithville, Ohio, U.S., on April 30, 2020. The U.S. Department of Agriculture will establish a "coordination center" to help livestock and poultry producers hurt by coronavirus-induced meatpacking plant closures. (Dane Rhys/Bloomberg via Getty Images)

Since then, farmers and processors have been forced to cull their livestock. Closed plants were transformed into euthanasia hubs, and piglets were aborted in countless numbers. Chickens were euthanized en masse.

In late April, poultry processors cautioned farmers about "depopulating flocks in the field." Often, companies own the animals and birds and pay farmers to feed and care for them, until they are ready to be processed for food.

But in recent weeks, those companies have gone to farms with tanks of carbon dioxide and wood chippers to discard the carcasses.

The pork industry has been most impacted, experts contend, having been forced to sever production by a third in April and May, and kill-to-discard at least a million pigs since the economic closure two months ago.

According to Kitty Block, president and CEO of the Humane Society of the United States, the standard recommendation for killing adults pigs is cramming them into makeshift gas chambers and suffocating them with carbon dioxide (CO2). For piglets, the overarching advice to farmers is to "use of blunt force trauma (which) involves workers slamming baby animals against a cement floor."

Ranney Ranch manager Melvin Johnson stands on Ranney side of fence in Corona, N.M., comparing their forage production to that of their neighbors to the left. (Photo by Peter Byck/2020 carbon nation.)

The crisis has sparked steep concern for small farmers and even suicide.

"As a farmer, you face a horrific choice — bleed money or euthanize animals.  And there are more animals coming to be fattened," said Keiko Tanaka, a professor of rural sociology at the University of Kentucky.

"The farmer faces emotional trauma in euthanizing. And we are wasting huge amounts of resources – pigs that would have at least nourished humans are killed for nothing and become an environmental liability during disposal."

Daren Bakst, a senior research fellow in agricultural policy at the Heritage Foundation, also stressed that farmers and ranchers "certainly don't want to euthanize their animals."

"The primary way to address this very unfortunate problem, though, is to reduce the meat processing plant bottleneck," he surmised.

And that requires a legislative examination.

"Existing law prohibits the interstate sale of meat from state-inspected processing plants even though these plants are deemed equivalent to federal-inspected facilities. Custom slaughtered meat can't be sold commercially at all, even intrastate," Bakst explained.

"This federal regulatory scheme has unnecessarily limited competition.  If there was greater flexibility in the system, then market dynamics would change, and there would be an additional way to get meat sold, and thus minimize some of the animal depopulation problems we have seen."

While euthanizing likely will continue until lockdowns are lifted and life creeps back, economists insist that there are at least small steps that can help minimize the bloodshed.

"They either must euthanize pigs otherwise ready to be sent to the packing plant, or reduce the number of sows being used for breeding, or do both," noted Vincent H. Smith, professor of agricultural economics at Montana State University.

Reducing the breeding herd means that when packing plants come back, the hog farm will operate below capacity, said Smith.

Smith also indicated that, proportionally, a small number could be sent to local small-scale processors that only serve in-state customers and operate in niche markets. However, he cautioned that those processors have very limited capacity and may be reluctant to scale up.

Will Harris, a regenerative farmer in Bluffton, Ga., said he built USDA-inspected red meat and poultry processing plants years ago on his farm to ensure production was kept close to home — and it is now paying dividends.

"They are small, but they have seamlessly continued to operate through this pandemic. In fact, we have had only three of our employees test positive for coronavirus out of 160 employees," Harris said. "We are far below our county's average. My plants have not missed one hour's operation."

Williams of Joyce Farms concurred that the silver bullet for pandemic survival lies in regenerative grazing. Sometimes called holistic management or mob grazing, it involves quickly rotating cattle from pasture to pasture before they damage the land. Chemical fertilizers or pesticides are not used and it builds soils that are richer in carbon, which in turn boosts crop and livestock yields.

"If we cannot harvest pigs or cattle at a specific time, we have them on pasture, and we simply keep them on pasture," he said. "We have space and ability to hold them quite a while longer."

Other farmers across the country are merely holding out as long as they can for the supply chain to bounce back. They are slowing the growth of their pigs  by changing their diet and heating up barns in a bid to reduce appetites.

And there have been other hints of hope.

Steadily, commercial plants are coming back online. The USDA Economic Research Service's monthly report on the livestock and dairy industry underscored that by May 15, capacity use of meatpacking plants was recovering from its late April low. In mid-May, Bloomberg reported that capacity utilization had recovered to about 80 percent or more.

However, many stress that without long-term changes and new regulations that are friendlier to small and mid-sized processing plants, these problems will only continue when the next public crisis hits.

"We really need to look at solutions that would support a mid-scale food production – mid-scale farms, mid-scale processing plants, mid-scale distribution – that could be flexible enough to adapt to adverse conditions," Tanaka said. "And those solutions are going to have to include competition policy, anti-trust, in order to break up the power concentrated in the largest agribusinesses."

"We already have all the technology we need for better breed diversity and livestock management," he added. "Regional farms create healthier farmers, animals, plant workers, and can improve the bottom-line in rural communities. They build regional circular economies that are good for the planet and good for us."