The City of Seattle held a racially segregated employee training session aimed at White staffers and instructing them on "undoing your own whiteness" in order to be held accountable by people of color, according to documents obtained by a public records request.

The session took place on June 12, as protesters took part in the so-called "Capitol Hill Organized Protest" in the Capitol Hill district.

One handout distributed in the session declared how “racism is not our fault but we are responsible." Another said White staffers must give up “the land” and their “guaranteed physical safety” in order to be an “accomplice” for racial justice.

Christopher F. Rufo, an editor for City Journal and director of the Discovery Institute’s Center on Wealth and Poverty, said he filed a public records request regarding the training session. On Monday, he published copies of the materials distributed to employees in the session on his Twitter account.

The Discovery Institute has since shared copies of the documents obtained from the City of Seattle with Fox News.

According to the documents, the Office of Civil Rights hosted a two-and-a-half-hour “Training on Internalized Racial Superiority for White People.”

In the email invitation to the event, the office asked “city employees who identify as white to join this training to learn, reflect, challenge ourselves, and build skills and relationships that help us show up more fully as allies and accomplices for racial justice.”

“We’ll examine our complicity in the system of white supremacy – how we internalize and reinforce it – and begin to cultivate practices that enable us to interrupt racism in ways to be accountable to Black, Indigenous and People of Color (BIPOC) folks within our community,” the email invitation said.

The name of the initial sender was redacted. Rufo claimed, “the City of Seattle has refused to provide the names of the diversity trainers, the budget for the program, or the video of the session.”

“I'm going to keep pushing—because this is exactly the kind of thought-policing they want to implement everywhere,” Rufo tweeted. “The new cultural revolution is being fought via corporate HR, city diversity training, and public school curriculums. When you find something like this in your community, expose it, criticize it, mock it, and reject it.”

"It's a dark irony that the City of Seattle's Office of Civil Rights would host racially segregated training sessions and demand that its white employees give up their 'physical safety' and 'white normative behavior,’” Rufo added in a statement to Fox News.

“This new racial orthodoxy is now sweeping through local government, schools, and corporate HR departments, and threatens to undermine the American idea of equality under the law. The City of Seattle should immediately launch an investigation into this practice, change its policy on race-segregated training sessions, and abandon the cult-like ideology of 'critical race theory.'"

Those who attended the session were shown handouts, including one that encouraged them to cultivate “networks with other white people who are practicing antiracist accomplicehood so you can talk through your struggles in the work of undoing your own whiteness.”

“Racism is not our fault but we are responsible,” one bullet point declared.

In order to be considered “accomplices,” White employees must give up “comfort,” “guaranteed physical safety,” “expectations or presumptions of emotional safety,” “control over other people and over the land,” and “relationships with some other white people.”

White employees were also urged to give up “niceties from neighbors and colleagues,” “the certainty of your job,” and “accepting jobs and promotions when we are not qualified, including racial equity jobs.”

Employees were presented with a flowchart that demonstrated how “white people keep the system going” by being socialized “to cause harm to POC,” “justify why we are superior and have been wronged by POC,” “use anger, self-righteousness and defensiveness [to] mask fear, shame, or guilt,” “show up small and inauthentic,” and finally are “unable to imagine a way forward that comes from a place of humanity,” thus reinforcing the status quo.

Those who attended the session were also shown a datasheet titled “Assimilation into Whiteness,” which claimed to document how those of Arab, Jewish, Finnish, German, Italian, Armenian or Irish descent still classify as White. 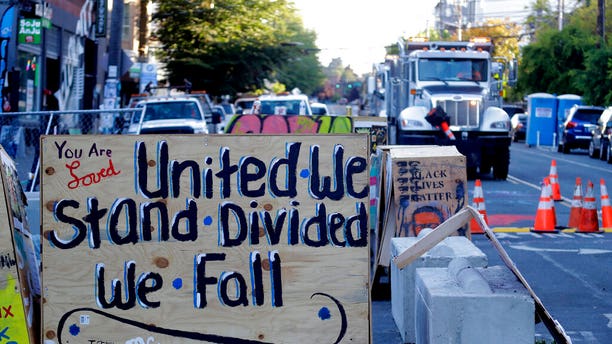 A sign on a barricade reads "United we stand divided we fall," as a truck and other heavy equipment from the Seattle Department of Transportation is staged at the CHOP (Capitol Hill Occupied Protest) zone in Seattle, Friday, June 26, 2020. (AP)

Employees were taught how to “interrupt” their whiteness by being “honest and implicate yourself either in the moment or in past experiences in which you acted or thought similarly.”

“Don’t blame others. Don’t distance. Don’t make yourself seem 'better.' None of us is,” a handout said. “You are also white and what someone else did today you may do tomorrow.”

Fox News has reached out to the City of Seattle separately for information about the session.