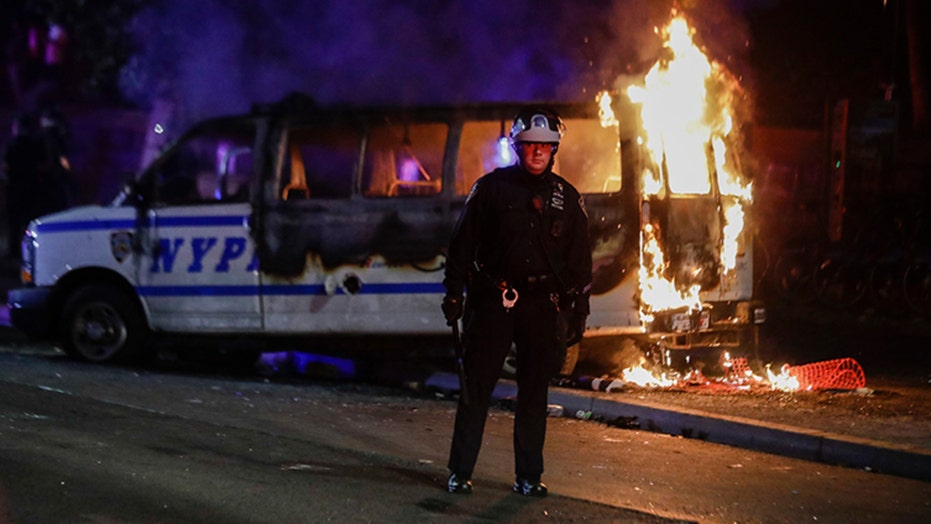 A New York woman has been charged with four counts of attempted murder after throwing a molotov cocktail at an NYPD van occupied by multiple police officers.

Samantha Shader, 27, of Catskill, additionally faces charges for attempted arson, reckless endangerment, criminal possession of a weapon, and assault, WABC reported. The device reportedly didn't explode and all four officers inside were able to escape.

"Multiple individuals, including the two sisters from upstate, are going to be charged federally (prosecuted by the U.S. Attorney’s Office for the Eastern District of New York) in connection with crimes last night involving Molotov cocktails in two different Brooklyn North precincts," a law enforcement source told Fox News on Saturday.

New York City Police Commissioner Dermot Shea condemned violent acts, saying "it is by the grace of God... that we don't have dead officers today."

Darian Shader, 21, reportedly tried to interfere with her sister's arrest and faces charges for obstruction of justice and resisting arrest.

GEORGE FLOYD DEATH: THE CITIES WHERE PEOPLE ARE RIOTING AND PROTESTING

The incident occurred around Friday night outside of the Brooklyn Museum, according to police. It was just one of many violent acts that occurred in New York and cities around the country as the nation reeled from Floyd's death -- another example, many say, of racial bias in policing.

On Friday night and early Saturday, around 200 people were reportedly apprehended. The environment was tense as angry protesters chanted "they're killing us" and held signs that read, "NYPD KKK."

One man bearing brass knuckles reportedly punched an officer in the face, and a separate NYPD van caught fire in Brooklyn.

"Coming to an assembly premeditated with loaded firearms, with bricks, with Molotov cocktails, is the furthest thing possible from civil disobedience," Shea said Saturday, adding: "It is very difficult to practice de-escalation when you're having a brick thrown at you, at your head."

One officer had their teeth knocked out and some were hospitalized, Shea said.

Police officers protect themselves with shields as protesters throw debris during a rally at the Barclays Center over the death of George Floyd, a black man who was in police custody in Minneapolis Friday, May 29, 2020, in the Brooklyn borough of New York. Floyd died after being restrained by Minneapolis police officers on Memorial Day. (AP Photo/Frank Franklin II)

According to the New York Post, Samantha Shader allegedly bit an officer's leg as authorities tried taking her into custody.

While not much is known about her but a law enforcement source told the Daily Mail that both sisters had a history of clashing with police at protests.