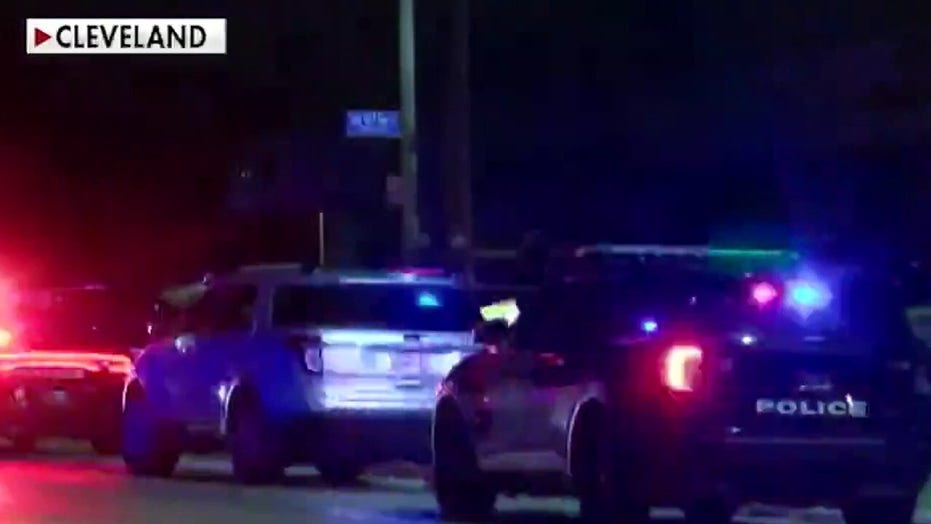 Around a dozen Cleveland police officers and their families reportedly led a group of hundreds of protesters who rallied in support of the “thin blue line” flag Friday after it was banned by an Ohio school district this week.

The rally followed the grim news that a Cleveland police officer had been fatally shot Thursday night. Three suspects have reportedly been arrested in the death of Cleveland police Detective James Skernivitz.

The flag controversy started when a high school football player carried a pro-police flag onto the field before a game last Friday to honor local first responders and his coach, who is also a police officer.

The flag is a black-and-white rendering of the American flag, with one of the stripes in bright blue to represent police.

“This display will not be a part of future pre-game activities at Chardon athletic contests,” Chardon Local Schools Superintendent Michael P. Hanlon Jr. wrote in a statement Monday. “In addition, measures will be put in place by our athletic director to review any planned pre-game displays for possible connections to any form of discrimination or particular political views.”

The flag’s presence at the game sparked a debate in the community over whether it represented innocent support for law enforcement or also expressed anti-Black Lives Matter sentiments.

Hanlon said that running out onto the field with the flag “could be interpreted as a racially motivated action” and he also noted that district policy “does not permit engagement in political activity.”

The district determined the student was only trying to honor law enforcement but still decided the flag could be seen as a political statement.

“We’re here to support the police, we need them, we need their protection," protester Chris Styblo told FOX 8. "The fact that the superintendent stated this was a political move -- what happened at the game -- it’s wrong. It wasn’t a political statement. They need to know that most of us Americans, we stand behind them.”

Rally organizer Eric Downing said he was thinking of the police officers who responded to a shooting at the high school in 2012 that left three students dead.

“I thought it just was really a disrespect to the people who ran into the school to save the teachers and students in 2012,” he told FOX 8. “Every day they leave, they kiss their family goodbye, they have no idea if they’re gonna make it back, no idea at all and how can you not respect them for protecting you?” he added.