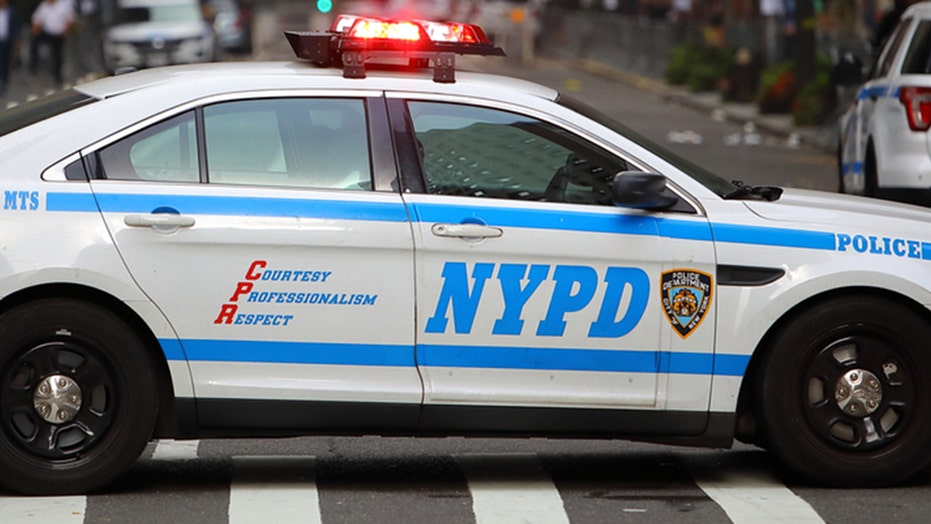 A pair of NYPD cops simply wanted to disperse a crowd gathered on a hot July night at a Bronx street corner.

But as a disturbing video shows, the officers suddenly found themselves surrounded by angry, taunting bystanders.

As the crowd cheered, a man the cops were trying to arrest put one of the officers in a headlock — a controversial tactic that has drawn condemnation when used by police, and is about to prohibited in New York City.

“F–k him up! F–k him up!” an unidentified man who filmed the incident shouted as the suspect wrapped his right arm around the officer's neck.

The dangerous grip lasted four seconds, video from the July 1 melee at Grand Concourse and Morris Avenue shows. When the captive cop fell to the ground, the suspect broke the headlock and ran off.

“They smoked you, p—y!” the man shooting the video then yells. “You just got smoked, p—y!”

The video came to light Saturday when it was tweeted by the Sergeants Benevolent Association.

The union used the video to vent its fury over a City Council bill awaiting Mayor Bill de Blasio's signature that will make it a misdemeanor offense for cops to use any maneuver that restricts a suspect’s airflow by compressing the neck.

Sitting, kneeling or standing on a suspect’s chest or back in a manner compressing their breathing would face the same penalty — up to a year in jail.

“COREY JOHNSON your STUPID law is about to be signed by NYC STUPID Mayor it’s time you both take your community input & grab these perps yourself,” read the SBA tweet, posted with the video.

“Putting a cop in a headlock could mean a death sentence if they lose control of their gun,” an outraged law enforcement source told the New York Post in response to the video.

“A cop in a headlock can’t maintain weapons control.”

The cop who was put in a headlock that night suffered a serious gash to the head that required staples, sources said.

The "headlocker" is a known gang member who turned himself in a week later at the 46th Precinct, where the brawl happened, a law enforcement source said. He’s been arrested 11 times with charges including gang assault, criminal possession of a loaded firearm and robbery, the source said.

With him at the precinct was his lawyer and a copy of the video, which the lawyer believed exonerated his client, as it also shows the cop lunging at the suspect before the grappling began, the source said.

But the video does not show what caused the cop to lunge — which was the suspect allegedly kicking down the street a body camera that had fallen off the uniform of one of the cops.

“The NYPD was disappointed that the individual was not charged initially,” an NYPD spokesperson said. “The violence against the police officer speaks for itself. We are now in discussions with the District Attorney regarding the case.”

Multiple law enforcement sources allege this account of what happened that night:

The two cops — both of them Neighborhood Coordination Officers, tasked with tackling quality of life issues — were part of an NYPD initiative to discourage outdoor crowds, in hopes of minimizing the number of people getting hurt as shootings plague the city.

When the crowd hanging out at the Bronx intersection ignored their instruction to disperse, the cops began writing a summons for a double-parked car at the scene.

The car owner then arrived at the scene and began complaining, insisting, “Well, now that you wrote the summons, I can park here for hours and hours.”

Told that’s not how it works, the car owner became “combative,” sources said.

It was while the two were trying to handcuff the belligerent car owner that the crowd began taunting the officers.

“He act gangsta because he got a badge and a gun,” the man filming is heard saying on the video. “F–k outta here. Y’all n—-s is p—y, bro.”

At some point, one of the cops’ body cameras is knocked to the pavement, only to then be kicked away by the man whose confrontation with the pair allegedly ended in a headlock.

Despite police opposition, de Blasio has stated he plans to sign the chokehold bill next week.

“We’re going to do the retraining of officers to address the features of the law,” de Blasio said at a Tuesday news conference.

“And as with everything in life, we’re going to work hard to make it work.”

A City Hall rep did not immediately respond to a request for comment late Saturday.