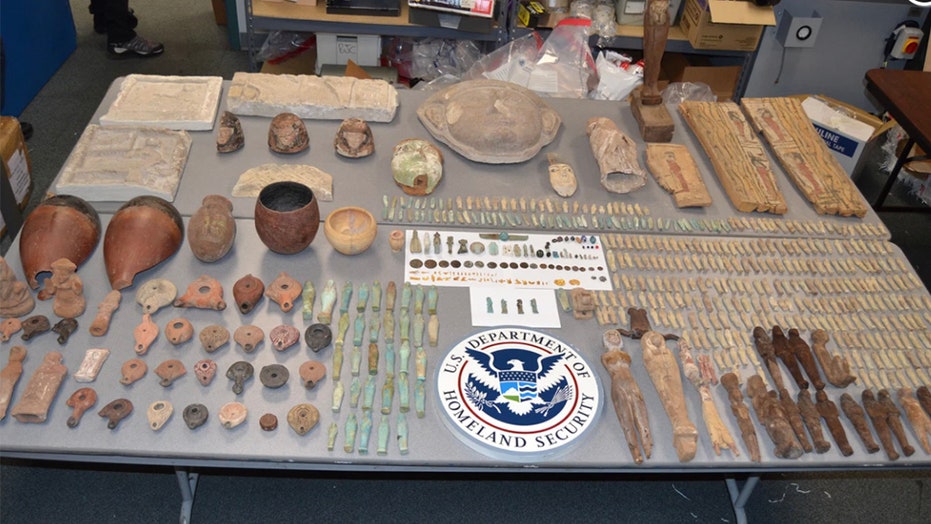 Ashraf Omar Eldarir, 47, a U.S. citizen, was arrested on a complaint in February 2020 after arriving at JFK airport the month prior with three suitcases filled with undeclared Egyptian antiquities, the U.S. Department of Justice said in a press release.

Ashraf Omar Eldarir allegedly told customs agents the contents of his suitcases were only worth $300.聽 (Department of Homeland Security)

The complaint alleges that Eldarir falsely declared to U.S. Customs and Border Protection (CBP) that he was carrying goods valued at only $300.

When CBP officers opened his suitcases, they found nearly 600 bubble and foam-wrapped Egyptian antiquities, the complaint said.  After opening the protective wrapping, loose sand and dirt spilled out. Some of the items also smelled of wet earth, indicating that they had been recently excavated.

Included among the items were gold amulets, a relief with the cartouche of a Ptolemaic king, wooden tomb model figures, and two Roman period funerary stelae.

Prosecutors say Eldarir allegedly did not produce any documentation from Egypt that would authorize him to export the artifacts.

An indictment was returned Monday in federal court in Central Islip, N.Y., the DOJ said. Eldarir is charged with one count smuggling arising from the JFK incident, and another county of smuggling stemming from earlier trip in which he allegedly smuggled an ancient Egyptian polychrome relief.

“These cultural treasures traveled across centuries and millennia, only to end up unceremoniously stuffed in a dirt-caked suitcase at JFK,” stated U.S. Attorney Richard Donoghue. “We commend our CBP and HSI partners for their excellent work and, with them, we stand ready to investigate and prosecute those who attempt to profit from the illegal smuggling of irreplaceable ancient artifacts.”

Eldarir faces a maximum sentence of 20 years’ imprisonment on each count if convicted. He will be arraigned at a later date.