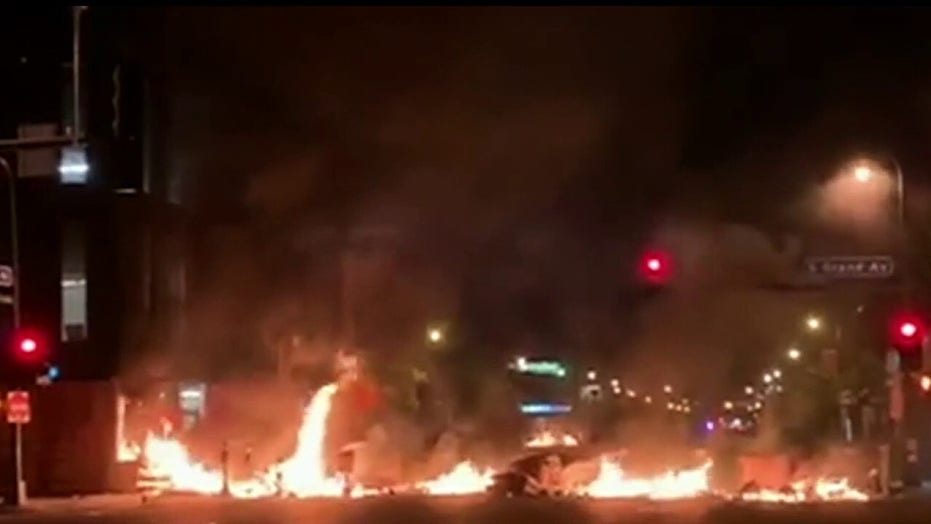 Officials scrambling to quell unrest after night of protests, riots in wake of Floyd death

Damage to police vehicles and assaults against law enforcement officers Saturday night prompted San Francisco Mayor London Breed to call for an immediate curfew until 5 a.m. local time -- and to request that California National Guard personnel be placed on standby.

"What we are seeing tonight -- the violence, the vandalism and the crimes being committed in our city, not against property but against other people -- that is something that we will not tolerate," Breed said, according to FOX 2 of the Bay Area.

"What we are seeing tonight -- the violence, the vandalism and the crimes being committed in our city, not against property but against other people -- that is something that we will not tolerate."

Across the bay in Emeryville, a popular shopping destination, looters appeared to be running rampant, smashing windows, and stealing items from popular stores including Best Buy, BevMo and Urban Outfitters, according to the report.

The San Francisco Bay Area was just one of dozens of metro areas across the U.S. dealing with another night of violence and vandalism in reaction to last week's death of George Floyd in police custody in Minneapolis.

In nearly a dozen states, governors called for the deployment of National Guard personnel as many large cities faced a third or even fourth night of destruction that included arson fires and attacks on police vehicles.

Many cities stepped up police presence, with TV and social media showing images of rioters being hit with pepper spray or rubber bullets.

In Ohio, 70-year-old U.S. Rep. Joyce Beatty was among a group of people hit with pepper spray as police looked to gain control in Columbus, the state capital.

"I'm ok. Was just trying my best to deescalate the situation," Beatty wrote on Twitter afterward.

OHIO DEM REP, OTHER OFFICIALS PEPPER-SPRAYED DURING PROTEST IN COLUMBUS

Earlier Saturday, President Trump condemned the riots that had taken place in previous days, vowing to stop what he labeled "mob violence."

“The memory of Floyd is being dishonored by rioters, looters, and anarchists,” Trump said, blaming "Antifa and other radical left-wing groups for terrorizing the innocent, destroying jobs, hurting businesses and burning down buildings."

Saturday's clashes swept clear across the continent, from Brooklyn, N.Y., where at least 200 people were arrested and “countless” officers were hurt, to Beverly Hills, Calif., where shops along the famous Rodeo Drive were looted as a crowd estimated at more than 2,000 people chanted "Eat the rich!"

In Los Angeles, stores including a Whole Foods and a Target were looted by huge crowds of rioters, FOX 11 reported.

In New York City, several NYPD vehicles were seen with smashed windows or burned by fire.

One person was arrested near the 79 Precinct with loaded .380 semi-automatic pistol.

Two women were reportedly arrested for throwing a Molotov cocktail at an NYPD van that had four officers inside.

Thirty-seven patrol cars have been vandalized so far, according to reports.

Police vehicles were targeted and set on fire Saturday, prompting Salt Lake City Mayor Erin Mendenhall, to call for an 8 p.m. curfew that will last until 6 a.m. Monday.

Police forces appeared overly rough with an elderly man watching the protests, and knocked him to the ground.

Only minor injuries were reported for police and protesters.

An Atlanta Police Department vehicle burns during a demonstration against police violence, Friday, May 29, 2020 in Atlanta. The protest started peacefully earlier in the day before demonstrators clashed with police. (Associated Press)

The protests continued Saturday and police arrested demonstrators who were blocking traffic.

Security officials surrounded Georgia Gov. Brian Kemp's house as crowds of protesters gathered near the mansion. A brick was reportedly thrown at one of the police officers.

Mayor Bottoms denounced the riots at a Saturday news conference.

"When you run it down the street with a Gucci bag, that's not about black people dying in America," she said. "That's about killing ourselves when we do things like that."

"When you run it down the street with a Gucci bag, that's not about black people dying in America. That's about killing ourselves when we do things like that."

In Los Angeles, Mayor Eric Garcetti announced a curfew for Saturday night after 500 people were arrested and five police officers were hurt as protests turned violent.

People hold signs and shout behind a burning police vehicle in Los Angeles, Saturday, May 30, 2020, during a protest over the death of George Floyd. (Associated Press)

At least two patrol vehicles were set on fire.

A vehicle is on fire behind a protester holding a sign during a rally on Saturday, May 30, 2020, in Philadelphia, over the death of George Floyd, a black man who died after being taken into police custody in Minneapolis. (Associated Press)

The protest started peacefully in front of City Hall as hundreds of people knelt in silence in honor of George Floyd.

“We appreciate their voice and their manner of expression. However, since that time, others have convened in Center City and are committing criminal acts, including vandalism. Those acts will not be tolerated,” the Philadelphia Police Department tweeted.

About 3,000 demonstrators took to the streets in Chicago on Saturday, filling the streets and climbing on cars and buses.

Police and protesters clashed in front of the Trump International Hotel and Tower after police with helmets and batons pushed demonstrators out of the way so a police car could get through.

Bottles and fireworks were reportedly thrown at police officers in front of the hotel.

Video posted to Twitter showed what appeared to be Chicago police officers being swarmed, hit and dragged by protesters.

But police responded to more than a dozen “police emergencies” as they tried to control the crowds.

In Washington, protesters again converged outside the White House, with some climbing on top of Secret Service cars and pushing security barricades further down Pennsylvania Avenue.

A demonstrator is injured as people protest the death of George Floyd, Saturday, May 30, 2020, near the White House in Washington. Floyd died after being restrained by Minneapolis police officers. (Associated Press)

President Trump had praised the Secret Service's action Friday night by saying the protesters would “...have been greeted with the most vicious dogs, and most ominous weapons,” had they crossed the White House fence. But Trump criticized D.C. Mayor Muriel Bowser for not letting D.C. police get involved, quoting her as saying “not their job.”

"We are grieving hundreds of years of institutional racism," Bowser said. "People are tired, sad, angry, and desperate for change."

Bowser, who was joined by D.C. Police Chief Peter Newsham, also said that Trump’s claims regarding the D.C. police were false.

D.C. police were present, along with U.S. Park Police, Friday night, and were ready to help Secret Service in Layfette Park, the area where protestors gathered in front of the White House, as they have done in the past.

Close to 300 protesters were reportedly arrested in New York City between Thursday and Friday night, and demonstrators continued to protest through Saturday.

New Yorkers also mourned the death of Eric Garner, who died from an NYPD officer’s chokehold in 2014 by attending a rally the Rev. Al Sharpton hosted.

The crowd chanted “I can’t breathe,” which were the last words Garner reportedly said -- but also one of the last statements said by Floyd in moments caught on cellphone video.

Trump has responded to the nationwide protests by blaming liberal leaders and threatening use of the military involvement.

In a tweet Saturday, he said: “Liberal Governors and Mayors must get MUCH tougher or the Federal Government will step in and do what has to be done, and that includes using the unlimited power of our Military.”