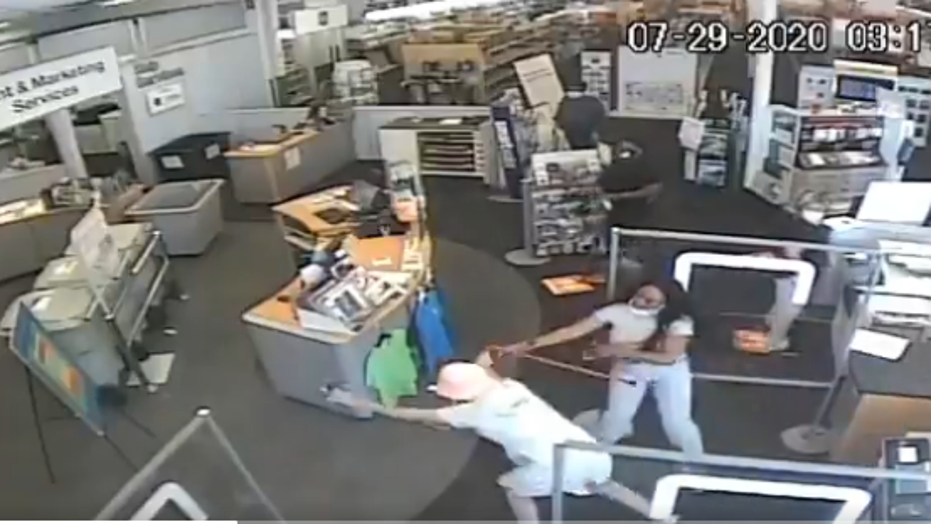 Police in New Jersey on Tuesday arrested a suspect who they say was captured on surveillance video violently throwing a customer to the floor inside a Staples store after the victim had asked the suspect to wear a mask properly.

The suspect, identified as Terri Thomas, 25, had been wanted by the Hackensack Police Department following the encounter last Wednesday that left the 54-year-old victim -- who had recently undergone a liver transplant -- with a fractured leg.

"Detectives Demetrius Carroll, Ioannis Papanikolaou, and James Han, in particular, all did a fantastic job," Detective Capt. Darrin DeWitt said, according to New York City's WABC-TV. "I also thank the Hackensack Staples store and the Staples corporate office for their cooperation, which was crucial in solving the case."

Margot Kagan, 54, had been using the store's fax machine around 3 p.m. when she asked Thomas to pull her face mask over her mouth and nose due to the coronavirus pandemic, resulting in an argument, police said. She told NJ.com she initially spoke to Thomas because she was fearful of contracting COVID-19 following the transplant.

Video taken of the incident from the store's security cameras showed Kagan fending off the suspect with her cane before she was thrown to the floor. The suspect was then seen leaving the store. Customers and employees initially stood nearby -- appearing stunned.

“I said, ‘You’re endangering everyone by not wearing your mask,’ and I put my head down and went back to faxing at the machine,” Kagan told NJ.com.

“Next thing I know, she’s two feet away from me, screaming at me,” she continued. “I really didn’t understand what she was saying. I lifted my cane to keep her away from me.”

DeWitt said Thomas became angry and yelled at the victim before "violently" throwing her to the floor. The altercation resulted in the victim suffered a leg fracture that required surgery, authorities said.

Terri Thomas, 25, was arrested after attacking聽a 54-year-old in a Hackensack Staples after being told to put a mask on, police say (Hackensack Police Department)

“Staples employees immediately called 911 and tended to the victim within seconds of the assault,” DeWitt added, according to the outlet. "Unfortunately, the video clip that was released ends just prior to them helping her."

Thomas was charged with aggravated assault, police said. She was released on a summons pending a court appearance on Aug. 24, according to the WABC.