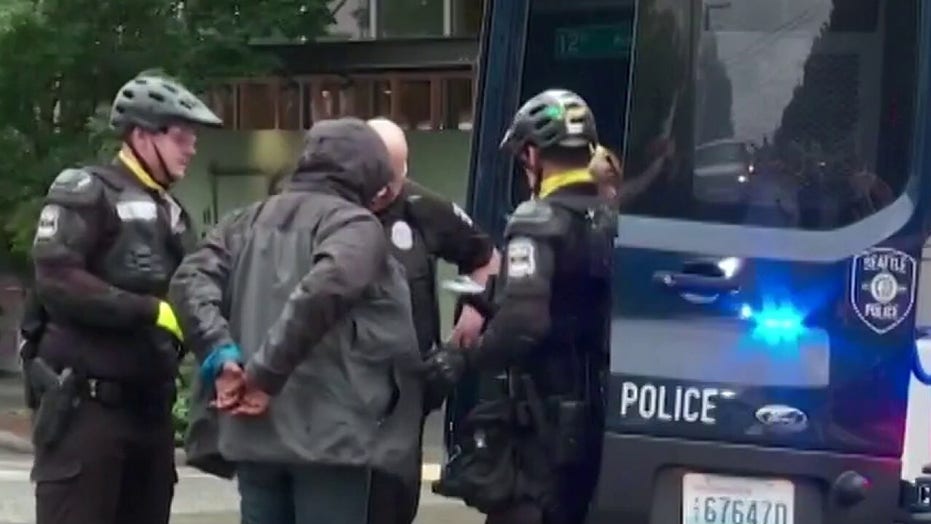 Businesses and local residents on Wednesday expressed relief after Seattle police cleared out an “occupied” protest area known as the Capitol Hill Organized Protest, or CHOP, while protesters vowed they will continue to put pressure on city leaders to meet their demands.

Police cleared the area early Wednesday, making more than a dozen arrests after Mayor Jenny Durkan declared the gathering an unlawful assembly following a string of shootings, two of which turned deadly.

The clearing seemed to conclude a cataclysmic saga that began when protests occupied several blocks around a park for weeks after police abandoned a precinct station following standoffs and clashes that were part of the nationwide unrest over the police custody death of George Floyd in Minneapolis.

Police and city workers fill a street occupied hours earlier by an encampment of protesters Wednesday, July 1, 2020, in Seattle, where streets had been blocked off in an area demonstrators had occupied for weeks. (AP)

Many business owners said they were relieved CHOP had been cleared but felt city leaders were too slow to respond.

Bill Donner, who is president of the printing firm Rightmark Label, had to deal with CHOP right outside his front door. He told KOMO News he was glad police cleared the area but felt city leaders were too slow to respond.

“It was a good time (for police) to come in. A few weeks too late, but a good time to come in,” Donner said. “The mayor hasn’t looked out for anybody’s safety that we are aware of, in weeks.”

Faizel Khan, who owns Cafe Argento, was one of about a dozen business owners who sued the city for not taking action sooner.

“We looked for answers from mayor and city council and we got nothing,” Khan said.

One resident who lives a block away form the CHOP zone said she agreed with the protesters' demands but also felt there was a lack of leadership from city officials.

“The most I heard from (Mayor Jenny Durkan) is that she was upset that people came to protest around her house (and that was) not the best look,” the resident told KOMO News. “It’s something I think people will remember when they vote in the future.”

Meanwhile, protesters and organizers of the occupied zone vowed to press on with their demands, which included, among other things, defunding the police by 50 percent.

Seattle Black Collective Voice, which was formed by people in the protest zone, said previously that their work would continue even if they were forced out of that area. On Wednesday afternoon the group said via Twitter, "We don't end with CHOP."

There had been mounting calls by critics, including President Donald Trump, to remove protesters. A group of local business owners sued the city, claiming that officials abandoned the area and made it impossible to run businesses because there was no police or fire protection.

U.S. Attorney General William Barr praised Police Chief Carmen Best for what he called "her courage and leadership in restoring the rule of law in Seattle."

"Chief Best has rightly committed to continue the substantive discussion while ending the violence, which threatens innocent people and undermines the very rule-of-law principles that the protesters profess to defend," he said in a statement.

Fox News’ Stephen Sorace and The Associated Press contributed to this report.