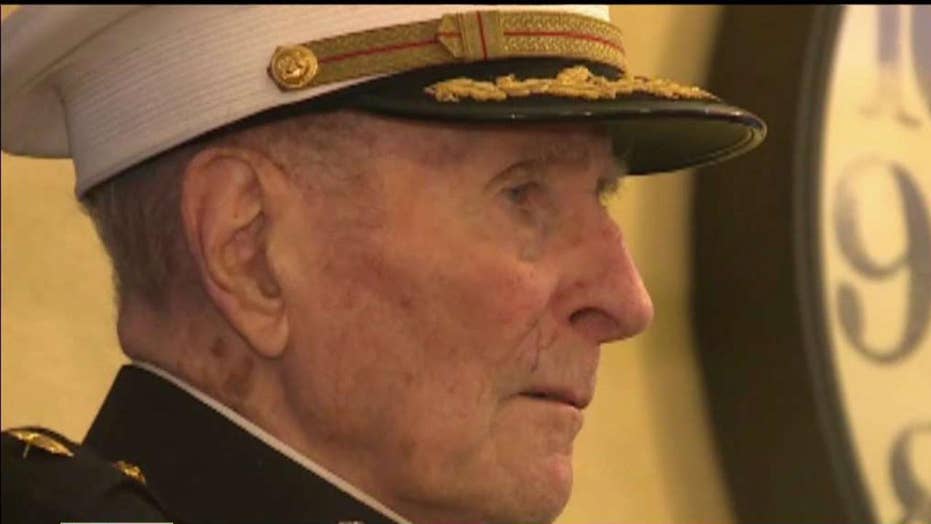 Retired Maj. Bill White, believed to be the oldest living Marine, celebrated a socially distanced 105th birthday with a drive-by salute from his Stockton, Calif., neighbors.

White, who lives at The Oaks at Inglewood – an assisted living facility – wondered at first what all the fuss was about. He was sitting on a shady patio on Friday, July 31, when he noticed a city police cruiser and other cars parading past.

CALIFORNIA WWII VETERAN, 104, ASKS FOR VALENTINE'S DAY CARDS: 'I'LL SAVE EVERY ONE'

While White hasn't been able to see his family much since the COVID-19 pandemic gripped the Golden State, The Stockton Record reported his daughter Mary Huston, friend Tony Walker, the Oaks executive director Diane Wright, staff members and residents all gathered – masks on – in support of the decorated Marine.

After joining the Marine Corps in 1934, White served on active duty for 30 years. During World War II, he fought in the Battle of Iwo Jima and received the Purple Heart for injuries from a grenade blast.

Half a decade later, White would also serve during the Korean War.

Following his retirement from the Marine Corps, White worked for the Huntington Beach Police Department as a reserve officer until he transitioned into a full-fledged officer. Eventually, he became a jailer.

White moved to Stockton 15 years ago for health reasons and has been a resident at The Oaks for about four years.

This is not the first time Americans – young and old – have come together to honor the patriot.

Earlier this year, White received over 500,000 cards and gifts from all over the world after launching the "Operation Valentine" social media campaign.

The messages included a special note from NASA and President Trump.