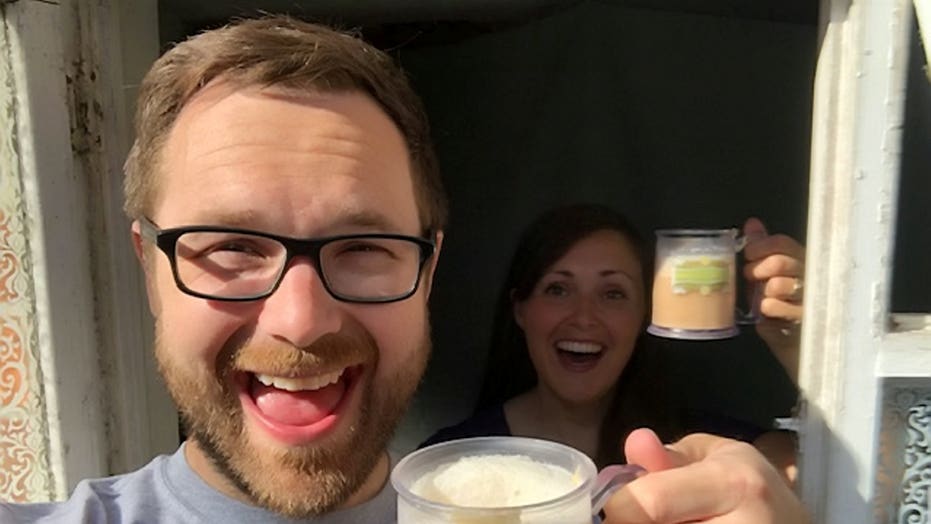 A "Harry Potter" fan transformed her home into the Orlando theme park after coronavirus sidelined her vacation.

Jen Bramwell, 32, "got her creative hat on" when lockdown was announced and she realized she could no longer jet off for husband Chris' 35th birthday.

For months, the business analyst bought props on eBay to build their own four-day 'Fauxlando' adventure, in order to recreate the roller coasters, quidditch and a Butterbeer. She didn't stop there — her fake vacay also involved faux tickets, airplane meals, a shopping trip to Walmart and dinner at IHOP.

"I started organizing it all when lockdown happened and realized it wasn't going to work," said Jen, from Berkshire, England. "I'm a bit of a perfectionist… I was just going to do the Volcano Bay but then I thought I'm doing that so I might as well do the rest!

One of the activities Jen set up for husband Chris was a virtual roller coaster ride.

"It's the attention to detail — I enjoy that. I'm probably quite a creative person, even though my job is not very creative! I probably went a little overboard compared to what most people would do."

She did most of the decorating while her husband, a program manager, worked during the day last Friday. When he came home, a suitcase and plane ticket were waiting outside with a "Welcome to Mortimer International Airport" banner over the front door.

Walking into his home, he 'boarded the plane' and was given a meal on a tiny tray with different compartments while watching movies on a tiny screen.

"At first he didn't know what was going on, but then he went along with it. It was so much fun," said Jen. "He said the whole thing was better than our wedding. I don't know if that is a good thing."

The two ate pancakes first thing the next day, and then took part in shooting practice in their yard, with airsoft rifles. Later on, they even went into a "Walmart" in their garage, which was stocked with American candy, because they always go there when in America. They even wore a t-shirt and carried a shopping basket with the logo.

The house itself was transformed into a 'McBramwells' drive-thru and Chris used an online recipe for cheeseburgers. He ordered at one window then moved to the next window to pay, and got his meal in his car.

"Apparently the cheeseburger was dead on, the taste of it," Jen said.

Jen made her husband order at one window, and pay at the next.

The couple took a trip to "Disney" that same day — with Jen donning a Snow White costume — where they rode virtual-reality roller coasters and took green-screen pictures on a flying carpet.

They then visited the fictional Diagon Alley from Harry Potter in their courtyard, and used an online recipe to make butterbeer at 'The Leaky Couldron' pub.

They then visited the fictional Diagon Alley from Harry Potter in their courtyard, and used an online recipe to make butterbeer at 'The Leaky Couldron' pub.

Chris even had to take his O.W.Ls — exams given to Hogwarts students — including tests in transfiguration and divination.

"The transfiguration test was to turn yourself into a unicorn by balancing as many marshmallows on your head as you could and the highest tower won. It was surprisingly civil," Jen said. "For quidditch, we had a tissue box full on ping pong balls and one was colored gold and it was tied around your waist — you essentially had to twerk it out until you found to golden snitch.

"He then had a certificate of graduation and I gave him an invisibility cloak."

On Sunday, they went to the waterpark Volcano Bay with a banner and a cocktail list, which they drank in the hot tub.

On Sunday, Jen and Chris visited "Volcano Bay" and drank from a cocktail list in the hot tub.

"After that, we had to fly home sadly, so we watched a couple movies on the flight home and ate food on the trays again — a nice finish off to the weekend!"

In order to keep the secret, Jen said she would be set-designing in the study for a few hours on most nights, and forbade Jon from going in. "Each day the postman dropped off 50,000 parcels - I think I kept the economy going by myself," she said of the decorations she ordered.

"He knew I was up to something but he didn't know what. I just went into the spare room each evening and told him to stay away. He's quite well-trained actually!"

The whole stunt cost Jen around 250 pounds, just over $300. It was worth it, though, as the couple had only been to Orlando once before in November 2018, and always vowed to go back.