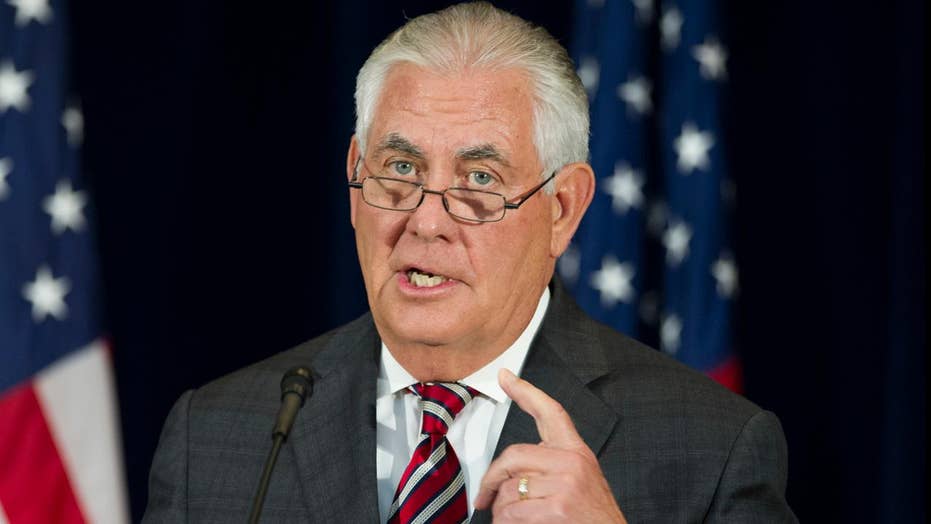 The 'All-Star' panel weighs in

This is a rush transcript from "Special Report," July 4, 2017. This copy may not be in its final form and may be updated.

VLADIMIR PUTIN, RUSSIAN PRESIDENT (through translator): We agreed to
actively develop our mutual initiative based on Russia's step by step plan
for Korean settlement and Chinese ideas, at the same time freezing nuclear
capabilities of DPRK and large-scale military exercises by the United
States and the Republic of Korea.

PRESIDENT DONALD TRUMP: The era of strategic
patience with the North Korean regime has failed. Many years and it's
failed. And, frankly, that patience is over. The United States calls on
other regional powers and all responsible nations to join us in
implementing sanctions and demanding that the North Korea choose a better
path and do it quickly, and a different future for its long-suffering
people.

BRET BAIER, ANCHOR: That was President Trump Friday. But this was something that
happened last night, a firing of an ICBM, intercontinental ballistic
missile, by the North Koreans. Just within this hour the secretary of
state has released a statement saying, in part, "Global action is required
to stop a global threat. Any country that hosts North Korean guest
workers, provides any economic or military benefits, or fails to fully
implement U.N. Security Council resolutions, is aiding and abetting a
dangerous regime. All nations should publicly demonstrate to North Korea
that there are consequences to their pursuit of nuclear weapons, and we
attempt to bring North Korea's provocative actions before the U.N. Security
Council and enact stronger measures to hold the DPRK accountable."

As you take a look at where this ICBM traveled. It was a splashdown about
480 miles away, but it's believed that this missile, a two-stage missile,
could reach Alaska. And that is the big question about whether North Korea
has been able to miniaturize its nuclear weapons to put it on the tip of
one of these missiles, and this has changed the dynamic because this ICBM
could reach the United States.

Now, just within the past hour, also in this show, the U.S. announced that
their joint exercises ongoing with the South Koreans to test what they are
calling the army tactical missile system in response to this. This is
ongoing. We expect to have video from the military momentarily of this
U.S.-South Korean test, their anti-ballistic missile efforts. Kim Jong-un
obviously celebrating what he is seeing as a major, major change in the
dynamic here.

CHARLES KRAUTHAMMER, SYNDICATED COLUMNIST: I think the juxtaposition of
the two clips you showed illustrates the issue and the reason why the
Tillerson statement I think comes out rather ineffective. Putin is talking
about using this crisis as a way to detach the United States from South
Korea. In other words, China and Russia together want to see an end to the
U.S.-South Korean alliance. They want to use the issue as a kind of
exchange in order to do that.

We see this and we should see this as a direct threat to the security of
the United States. It is an ICBM that can hit U.S. territory, and that
would be absolutely catastrophic. We have completely different
understandings of what the threat is. And Tillerson's statement simply
says it's not a U.S. problem. It's a global problem. It is not. It's a
U.S. problem. The global partners that we talk about are not that
interested in solving it. And that's why all the importuning and all the
sanctions, all the U.N. Security Council resolutions aren't going to do a
thing. This is a threat to the United States, not to Russia, not to China.
And therefore, as the president has said himself, we're going to have to
solve the problem ourselves if we can.

BAIER: But you don't think South Korea and Japan have a vested interest in
trying to prevent North Korea from having a nuclear weapon?

KRAUTHAMMER: They do, but they don't have the means. Only we do. That's
why they are clinging to the U.S. alliance, and that's why the Chinese and
the Russians want to break it up, because it leaves them naked and exposed.

But the Japanese have no alternative. The South Koreans have no
alternative because we provide the nuclear umbrella and their security.
But we are being exposed as being impotent in doing this because we don't
have the means to do it. But talk about a military option, I think it
sounds to me fairly empty.

MICHAEL NEEDHAM, CHIEF EXECUTIVE OFFICER, HERITAGE ACTION FOR AMERICA: I
think it depends, though, Charles, how you are talking about the means.
Ten years ago we impounded $23 million from a Chinese bank, Banco Delta
Asia, and for about two years the North Koreans were really squirming under
that pressure.

What it requires is not necessarily a focus on the means or the tactics but
a complete strategic shift. In the past we have tried to bring the North
Koreans to the negotiating table. President Clinton's agreed framework,
President Bush's six-party talks, with the goal of getting them to accept
denuclearization. We need a policy of active regime intolerance that says
we're going to use economic, we're going to use diplomatic pressure, we're
going to use appropriate military pressure to make it very clear that there
is no path forward for the Kim regime and to force them to come forward
because clearly the last 25 years of just thinking we can negotiate away
nuclear weapons is something that has been an abject failure.

BAIER: So the fact that you have Kim Jong-un who has now launched more
missiles than his father or grandfather combined, and he is doing so
increasingly with success. I mean, it seems like this has changed the
dynamic, Daniel. What do you see as a possible military response
considering the challenges of also possibly a mobile launcher this time?

DANIEL HALPER, CONTRIBUTING EDITOR, "WASHINGTON FREE BEACON": Look, there
could be cyber responses. I think we have done some in the past, at least
they have been rumored, and there are other ways to do it that are perhaps
more subversive than overt military tax.

But as Michael said, we've had 25 years of failed North Korea policy. When
it's failed in the past, the presidents have gotten away with it because
their military hasn't yet been advanced enough to inflict pain on the
United States. Now it's different. There's a new leader, he has new
capabilities. And if we fail now, it could really -- the possibility -- I
don't want to sound too grim or too alarmist, but there are life and death
implications to American citizens, and it's really incumbent on the
president to use those means to force North Korea to do something
different, and it requires I think different thinking than we've had in the
past.

BAIER: Tim, the only time we heard from the president today was about
military families on the Fourth of July. We saw it on the South Lawn
there. Secretary Tillerson obviously taking point on this statement. The
tweet early from the president, "North Korea has just launched another
missile. Does this guy have anything better to do with his life? Hard to
believe that South Korea and Japan will put up with this much longer.
Perhaps China will put a heavy move on North Korea and end this nonsense
once and for all!"

TIM FARLEY, HOST, "MORNING BRIEFING POTUS," SIRIUS XM RADIO: That sort of
gets to the question that Charles mentioned. Japan and South Korea really
can't do anything. I ask these questions. I don't know what the answer
is, obviously, to this, but I go back to something Richard Haass said a
long time ago, there is no self-correcting mechanism in international
relations. In the case of the policy, we know that strategic patience is
over. Has that been replaced by strategic impatience? Has it been
replaced by tactical patience? Or is it just ad hoc Twitter taunts from
the president?

And his point that China was not going to be able to do anything, I think
I'm a little concerned now just about what North Korea is doing but the
fact that we now have our inspections evidently closed off to our nuclear
safety and security measures. They're keeping them quiet now. You wonder
what we can do that's proportional, whether it's cyber-attacks or whatever,
and what will get a response, because it is a U.S. problem. To Charles'
point, this is something that the United States is going to have to respond
to. And I don't know that you can build a coalition, especially if China
is going to be in charge of the Security Council meetings this week.

BAIER: Exactly. China is in charge of the U.N. Security Council and
there's supposedly a meeting in the works tomorrow afternoon to deal with
this. But the prospects of getting something significant through with
China in that point and Russia obviously there as well?

KRAUTHAMMER: I don't think it would make a difference if we were in charge
of the Security Council, if we had the presidency, it would make no
difference whatsoever. The Russians, it's a matter of the imbalance, the
asymmetry of interests. Our interests are radically different from the
Chinese and the Russians. And for 25 years we have refused to accept that.

The fact is the others don't care. The missiles that are launched by
Pyongyang are never headed west. They are always headed east, they're
always headed our way. Everybody understands what the target is. So
either we are going to act on our own, which is what the president says he
will do, or, and we are approaching the point we're simply going to have to
accept a nuclear North Korea the same way that under Mao Tse-Tung who was a
fairly radical anti-American communist and we accepted the fact that China
went nuclear as well. At a certain point, you bow to reality and you try
to live in deterrence. It's not easy, it's uncomfortable, but I think
we're going to reach that point where either it's going to be a binary
choice, you go to war or you accept a nuclear North Korea.

BAIER: A nuclear North Korea that clearly is trying to test missiles that
get to the U.S.

NEEDHAM: Which is absolutely unacceptable. And during the cold war we
didn't just come to terms with a Soviet Union that had nuclear weapons and
ICBM's pointed at the United States. We engaged in a policy that said at
every single turn we're going to figure out what is the most aggressive,
appropriate response with regards to the Olympics, with regards to arms
control, with regards to economic sanctions.

BAIER: Let's just remind everybody the 2018 Olympics, the winter games,
are in South Korea. All of those countries that are going to send athletes
to South Korea are going to do so potentially under this umbrella of
uncertainty and security.

NEEDHAM: It's a fantastic point, and we need to make it absolutely clear
that a nuclear armed North Korea with weapons capable of reaching the
United States under the Kim regime is absolutely intolerable to the United
States, and that's where I think President Trump's comments on Friday were
exactly spot on. It is time for a different mindset in approaching North
Korea.

Content and Programming Copyright 2017 Fox News Network, LLC. ALL RIGHTS RESERVED. Copyright 2017 CQ-Roll Call, Inc. All materials herein are protected by United States copyright law and may not be reproduced, distributed, transmitted, displayed, published or broadcast without the prior written permission of CQ-Roll Call. You may not alter or remove any trademark, copyright or other notice from copies of the content.