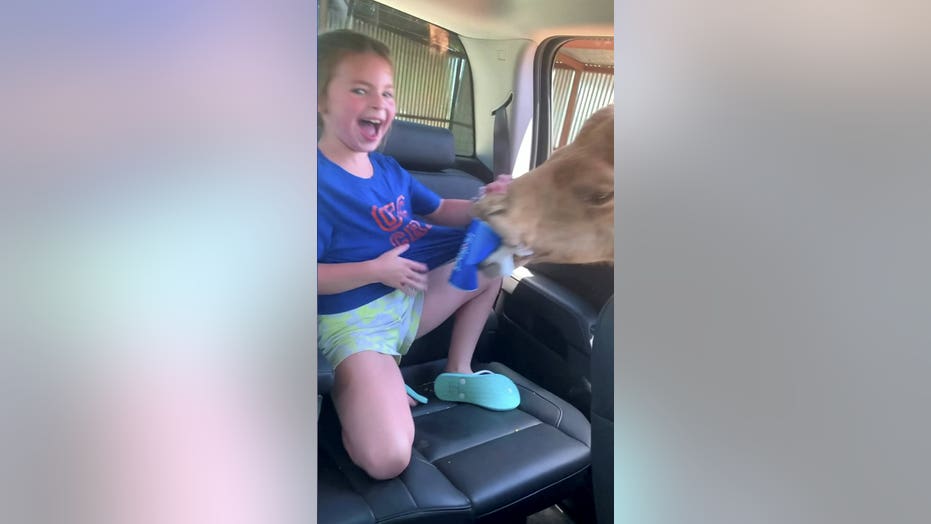 A camel at a zoo in Oklahoma has gone viral after images of it poking its head into a car in search of snacks surfaced.

The camel, which resides at Arbuckle Wilderness in Davis, Okla., gave Nathan Pugh and his family a shock after it put its head in the car looking for food, British news agency SWNS reports.

“When you pay to get in, they give you food,” said Nathan, an electrician, said, adding he and his family, including his wife Kelsi Nicole and their children, bought $10 worth of food.

This is the moment a rude camel got the hump and attacked a family's car in search of snacks. (Credit: SWNS)

"They put it in a sack and then they give you Pepsi cups to feed the animals with," Nathan, 37, continued. "When she started the video, I only had one hand on the cup, and the thing took it.”

After the camel stole Nathan's cup of food, it set its sights on the food he and his 7-year-old daughter Ryan were holding. It stole Ryan's animal feed, slobbered on the back seat, while her 9-year-old brother, Bostyn, looked on and laughed.

Nathan Pugh, 37, was at Arbuckle Wilderness - a drive-through zoo in Davis, Oklahoma - when the overzealous camel came poking around. (Credit: SWNS)

Locked up because of the coronavirus pandemic, he wanted to create memories with his family, but he got more than he bargained for.

“We’d been locked up in the house, so we went out to make some memories,” Nathan said, laughing. “It bit me a little bit, but I was just mad that it took my cup.”