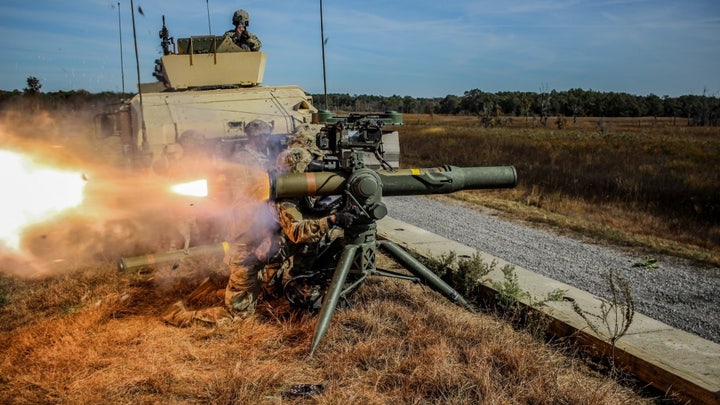 What if artillery rounds, mini-drone swarms of explosives, rockets and even air-fired missiles are all approaching forward-positioned Army troops at the same time? Imagine that these incoming weapons are dispersed, varied and fast approaching. How do ground commanders avoid being overwhelmed and destroyed? Could AI help solve this lethal predicament?

The incoming attacks are fast, multi-faceted and extremely lethal. Ground commanders and armed infantry simply do not have time to respond to all targets simultaneously to discern which ones to intercept. Not only that, but commanders may simply have too many targets to optimize which kind of layered defense might be best suited to counter different approaching weapons. Think about the scenarios going through a commander’s head. Which countermeasure is best? A kinetic interceptor? Electronic warfare? Lasers? These questions would likely need to be addressed, analyzed and answered in real-time, possibly even a matter of seconds, to save lives.

“We are trying to merge operationally relevant data at the tactical level by connecting sensor to shooter. What if the shooter is a robot? Do I have to confirm each target?” Dr. Bruce Jette, Assistant Secretary of the Army, Acquisition, Logistics and Technology, told The National Interest in an interview.

HOW AI CHANGES ATTACK MISSIONS FOR US FIGHTER JETS AND BOMBERS

AI systems can now instantly organize incoming sensor data, perform near-real-time analytics and make determinations regarding the scope of the attack, its range, speed, configuration and approaching trajectory. Perhaps of greatest significance, it could possibly determine which method of defense might be needed. All of these variables are likely to converge so fast that a human commander simply could not respond, placing the Army force, installation or Forward Operating Base at great risk of destruction.

Advanced algorithms, however, can synthesize and analyze radar returns, infrared sensor data, navigational details and countermeasures, bounce all of that information off an existing and seemingly limitless database, and present options to human decision-makers immediately. Perhaps larger incoming weapons will need to be destroyed with a kinetic, explosive interceptor such as a Coyote drone? Perhaps a small group of electronically powered mini-drones might be best countered by an EW weapon able to jam the target and throw it off course? Or further, perhaps the combat is in an urban area where explosive fragments might injure civilians, a circumstance which may call for a laser? However, weather obscurants or certain terrain features might preclude the ability for a laser to incinerate approaching targets, requiring a different defensive solution. AI programs can now determine which methods have been effective in the past in varying, yet specific scenarios and present commanders with a series of options. This kind of application, which is now being rapidly advanced by Army scientists, researchers and weapons developers, could bring new dimensions to warfare. It is exactly what Jette envisions.

Jette paralleled this process to an interesting and significant multi-service term called “weapons hold, weapons tight, weapons free.” Weapons Hold, according to a 2002 multi-service “Brevity Code” manual, means only fire in self-defense or in response to an order: Weapons Tight means fire at targets positively identified as hostile; Weapons Free means only fire at targets not identified as friendly. AI, Jette explained, can massively expedite this process. Perhaps some elements of this could be performed autonomously?

In these cases involving the use of force for defensive purposes, if applied in a non-lethal way, might be best executed by robots themselves, Jette explained. Of course, the priority is to ensure humans are in the loop regarding decisions about lethal force, yet perhaps this kind of defensive application might save lives in a matter of seconds. The concept, as Jette seemed to explain, was to synergize and optimize the idea blend between the procedural and analytical functions best performed by AI, while preserving and calling upon the attributes and faculties unique to human cognition.

“How far can we push computational capabilities to do that in real time, or near real-time functionality for a weapons system? We are looking at target identification and firing solution development,” Jette said.

Ultimately, Jette explained the fundamental concept with all of this is command and control, essentially advancing the need to analyze the precise extent to which new technology changes and informs tactical warfare.

“I think this takes a thought process that is different from what we have explored so far, because we have been so focused on the technology. We have medium and small robotic systems and we have numerous AI efforts going on. The real difference will be thinking through that second and third layer, looking at how we change the way we think about command and control, and take advantage of the capabilities that are inherent in the system.” Jette said.