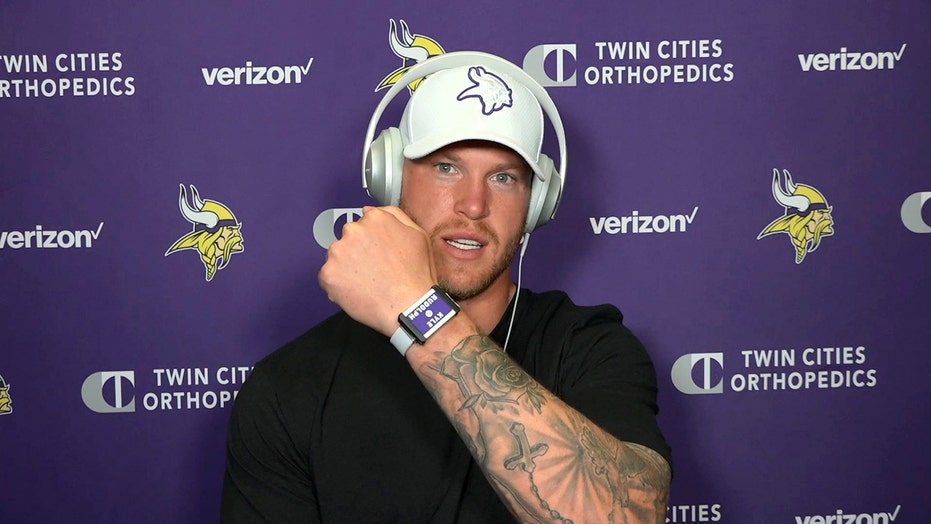 The captivation and celebration of the NFL have long-stemmed from the speed, strategy, strength and teamwork that make the game go.

Football is just as much a sport of pattern and detail, too, never more than at training camps around the league in the time of COVID-19.

Like the defense stiffening at the goal line late in the fourth quarter, the NFL has implemented a wide array of health protocols designed to keep the virus from wrecking the 2020 season for this cultural institution that was a $16 billion business before the pandemic.

“There are so many steps along the way. You’ve got to fill out your questionnaire on our app when you wake up in the morning,” Minnesota Vikings tight end Kyle Rudolph said. “Then when you come in, you sanitize your hands, do your temperature check, get your COVID tests, put on your lanyard, grab your tracker. So there’s just a lot of things that have now been added to your routine.”

Daily testing, naturally, is the fulcrum of this aggressive virus-proofing around team facilities. NFL Network reported that, of 109,075 coronavirus tests conducted on players, coaches and team employees through Tuesday, the rate of positive tests has been 0.46% overall and 0.81% for players.

Since training camps began three weeks ago, 108 players have been placed on COVID-19 reserve lists by their respective teams — according to an Associated Press review of the league’s daily transaction logs — and 81 of those players were subsequently returned to active status on the roster. There are more than 2,600 players currently employed across the 32 clubs.

Landing on the COVID-19 reserve list does not mean a player has the virus. The category was created for a player who either tests positive for COVID-19 or who has been quarantined after having been in close contact with an infected person or persons. By agreement between the NFL and the NFL Players Association, clubs are not permitted to disclose whether a player is positive for COVID-19 or simply in preventative quarantine.

Wearing masks, of course, is a vital part of the equation.

After leaving the testing trailer and entering the building, players and staffers must pass the temperature check. The tablet-like device won't even perform the thermal scan if the person is not wearing a face covering.

“It’s an adjustment. You used to check phone, key, wallet. Now it’s phone, key, wallet, mask, proximity locator,” Vikings linebacker Eric Kendricks said. “But they explained to us the reason behind it. If someone is to get infected, heaven forbid, if we’re close to those people for a certain amount of time, those devices will allow us to quarantine effectively if that’s the case. So there’s a reason behind the madness.”

Passing the symptom questionnaire and the temperature check, with the nasal swab performed in between, then takes the employee to another level of high-tech: the proximity tracker.

The device, which resembles a smart watch, produces audible and visual warnings to help maximize social distancing and keep employees not required to interact with players apart from those who must. The tracker can also provide instant reports for contact tracing in case of a positive test. The devices are worn during practice but turned in at the end of the work day before employees depart the building.

“It’s weird when someone tells you you’ve been too close for too long,” Kansas City Chiefs quarterback Patrick Mahomes said, “but it’s necessary. We’re going to try to do our part for the community and make sure we can keep playing the game we love.”

The bulk of the virus-proofing protocols are uniform across the league, with each team applying its own twists to fit the facility.

The Miami Dolphins installed new air purification devices throughout their facility. The Tennessee Titans had 4-feet-long dividers placed between each player's cubicle in the locker room, making the spaces look a little like voting booths. Vikings players can order meals via smart phone app to reduce time spent in the cafeteria.

The Carolina Panthers have made clever use of Bank of America Stadium to their virus-fighting advantage. All of the 80-plus players have their own temporary luxury suite at the 73,000-seat venue, expected to retreat there alone for lunch or during the down time between practices and meetings in the name of social distancing.

There's almost no end to the precautions that can be taken. Narrow hallways have become one-way paths. Couches have been removed. Even shower heads in the locker room have been taken out to increase spacing. Electric static sprayers are being used for surface disinfecting. Seating capacity in meeting rooms has been significantly reduced.

“We're so spaced out that it can feel like you’re not all in the same room together, even more than a Zoom, even though you are sitting in the same room,” Titans quarterback Ryan Tannehill said.

In an intense contact sport in which participants are bound to breathe on each other often, the work has to be done in the building during the day and at home at night.

“Everyone is going to do the absolute best they can do, knowing that it’s impossible to totally eliminate the risk," said Vikings head athletic trainer and vice president of sports medicine Eric Sugarman, who is the team’s infection control officer. He tested positive for COVID-19 last month.

As far as the tall task of making it through a full season, well, the fiercely competitive nature of its participants ought to work in pro football's favor.

“It's going to come down to whoever handles the situation the best. That’s who’s going to be at the top at the end, and I feel like we’re taking all the right steps,” Green Bay Packers defensive tackle Kenny Clark said. “You walk in here, you get tested, there’s sanitizers everywhere. You know, the masks, everything that we’re doing, they’re serious about getting us ready to be able to play and keeping us healthy.”