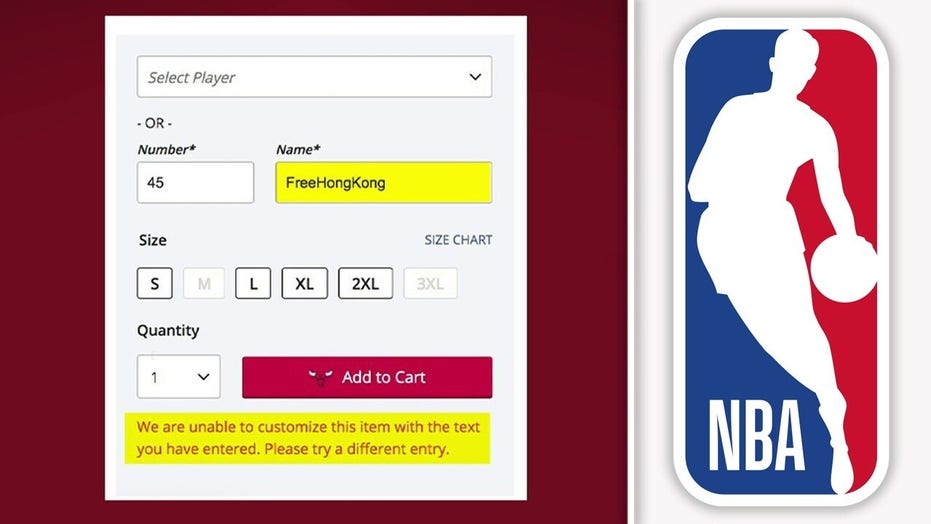 The NBA is now allowing 'FreeHongKong' to be printed on custom online orders after fans discovered they were blocked from using the phrase but permitted to use derogatory remarks like 'KillCops'; reaction and analysis on 'Outnumbered.'

Customers can no longer order personalized apparel from the NBA's online store following major backlash the league received for not allowing "Free Hong Kong" to be printed on its gear.

On Monday, the NBA was swept into controversy after a viral video showed that the online store could not process orders that used the text "FreeHongKong." Hours later, the store's operator Fanatics reversed what it suggested was a technical error that prompted the phrase to be "inadvertently prohibited."

However, days after the incident, customers cannot find customizable apparel on both Fanatics and the NBA's online stores. And returning to pages of specific jerseys showed that the products had been "discontinued."

An NBA spokesperson confirmed to Fox News that ordering personalized apparel has been "disabled."

"Based on attempts to include violent, abusive and hateful messages on personalized NBA jerseys, the personalization feature has been disabled on NBAStore.com," the spokesperson said. "Fanatics, the operator of our online store, is conducting a further review to establish appropriate safeguards and ensure that this feature is not used to promote violence, hate or abuse of any kind.”

Some of the league's critics previously pointed out amid the "FreeHongKong" uproar that customers were able to order gear with the text "Kill Cops" without any problem.

However, customized gear from other leagues like the NFL and MLB is still available from Fanatics and it appears customers are blocked from printing hateful messages as the page notifies "We are unable to customize this item with the text you have entered" when typing in "Kill Cops."

The NBA did not immediately respond to Fox News' additional request for comment.

A video shared by a Twitter user named Vince on Sunday evening went viral showing his attempt to order a custom T-shirt with text that reads "FreeHongKong" on the site Fanatics.com, which has direct ties to all major sports leagues including the NBA.

"We are unable to customize this item with the text you have entered. Please try a different entry," the error message reads at the bottom.

However, Vince was able to successfully request "FreeHongKonu," changing the last letter to a "u" from a "g."

Fox News was able to confirm on both Fanatics and NBA's own online store that "FreeHongKong" was not able be printed on the shirt. The custom gear only allowed 12 characters and the site did allow "Hong Kong" and "HongKongFree" to be printed.

As The Daily Caller's Peter J. Hasson pointed out, "FreeAmerica," "FreeCanada," "FreeMexico," and "FreeTaiwan" were also allowed to be printed on the gear.

The apparent ban received swift condemnation from high-profile Republicans like Senators Josh Hawley of Missouri and Rick Scott of Florida as well as Donald Trump Jr., all accusing the league of being too cozy with China.

The subject of the NBA's close ties to China was renewed last week after ESPN's prominent NBA reporter Adrian Wojnarowski sent Sen. Hawley a profane response to the lawmaker's criticism of the league's decision of “pre-approved, social justice slogans” while “censoring support” for law enforcement and criticism of the Chinese Communist Party.

Wojnarowski apologized to Hawley, and ESPN later suspended the reporter.

Joseph A. Wulfsohn is a media reporter for Fox News. Follow him on Twitter @JosephWulfsohn.
Klik hier|||https://outLetonLine-michaeLkors.comwordpress theme