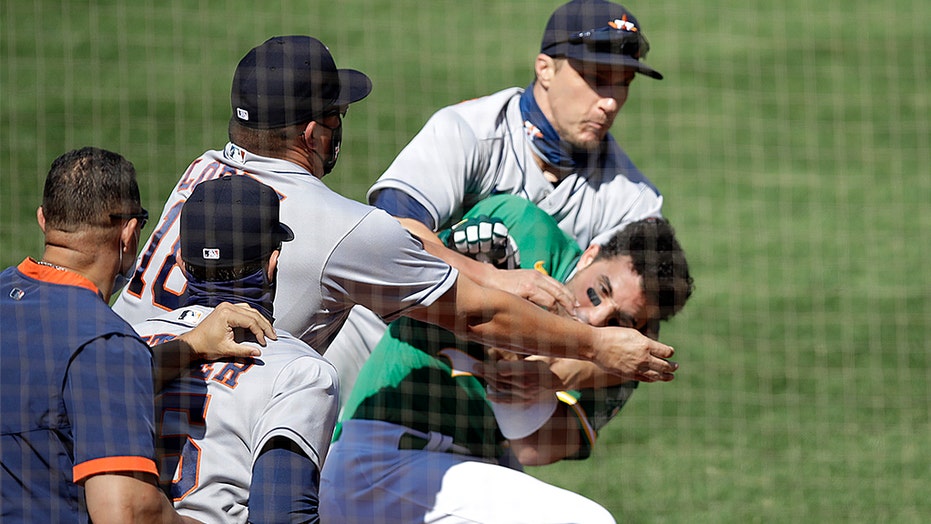 A brawl during the Astros-Athletics series finale Sunday which cleared the benches during the seventh inning could leave the AL West rivals facing heavy fines, according to reports.

Oakland’s Ramon Laureano was hit by a pitch from Humberto Castellanos with one out in the seventh.

He began verbally arguing with Astros hitting coach Alex Cintron, then left first base, threw down his batting helmet and began sprinting toward Cintron.

Astros catcher Dustin Garneau tackled Laureano before the A’s outfielder got to the hitting coach.

Players rushed out of both dugouts.

Oakland Athletics' Ramon Laureano (22) charges the Houston Astros dugout after being hit by a pitch thrown by Astros' Humberto Castellanos in the seventh inning of a baseball game Sunday, Aug. 9, 2020, in Oakland, Calif.聽 (AP)

Laureano was ejected by plate umpire Ted Barrett, and the umpiring crew could be heard screaming at the players to “get back to the dugout!” through a ballpark with no fans.

MLB coronavirus protocols prohibit teams from engaging in fights on the field.

Garneau has been teammates with Laureano, and called him a "good dude."

"The guy charged at our dugout and I didn't know what else to do," Garneau said about his tackle.

Oakland Athletics' Ramon Laureano is restrained by Houston Astro's Dustin Garneau after Laureano charged the dugout after being hit by a pitch thrown by Humberto Castellanos in the seventh inning of a baseball game Sunday, Aug. 9, 2020, in Oakland, Calif. (AP)

“Ramon doesn’t go over there unless something completely offensive came out of that dugout … That person should get suspended,” A’s manager Bob Melvin told reporters after his team won, 7-2.

Tempers have been flaring between the teams since Houston’s sign-stealing scandal was brought to light by Oakland pitcher Mike Fiers, formerly on the Astros staff.

“He got hit by two guys who don’t have any time in the big leagues,” Astros manager Dusty Baker added in defending his pitchers. “[Castellanos] wasn’t trying to hit him.”

AL West-leading Oakland led 6-2 at the time and was riding an eight-game winning streak. The three-time reigning division champion Astros were mired in a four-game losing streak.