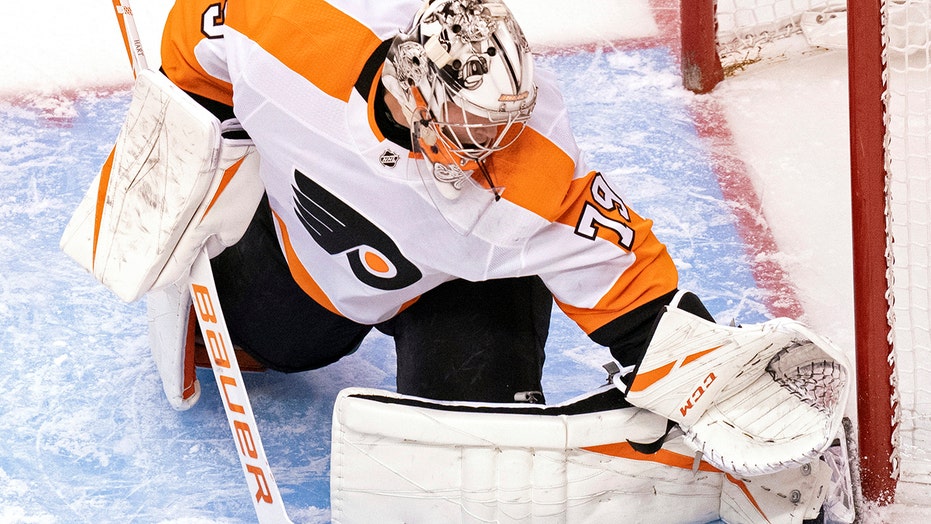 The Lightning not only dropped the game in completing preliminary round-robin play with a 2-1 record, Tampa Bay’s star defenseman Victor Hedman did not return after appearing to twist his right ankle while going down untouched midway through the first period.

Coach Jon Cooper didn't have an update on Hedman's status or how much time he might miss, though acknowledged his potential loss would create a notable hole in the Lightning's lineup.

“It's a little frustrating because we feel like we're going in the right direction and to lose some of the star power we have,” said Cooper, noting the Lightning are also without captain Steven Stamkos and played Saturday minus Hedman's defensive partner Jan Rutta. “We’ve got to circle the wagons.”

Stamkos has been out since sustaining a lower body injury before the start of training camp last month. Cooper would only list Rutta as being unfit to play.

Joel Farabee had a goal and assist, Tyler Pitlick scored into an empty net with 1:20 left, and Carter Hart stopped 23 shots for the Flyers, who finished 3-0. Philadelphia didn’t allow more than one goal in also defeating Boston and Washington, and out-scored its opponents by a combined 11-3.

The Flyers, who entered round-robin play as the East’s fourth seed, move on to the first round next week and face the 12th-seeded Montreal Canadiens.

Montreal upset Sidney Crosby and the Pittsburgh Penguins in four games of their best-of-five preliminary round series. Philadelphia and Montreal have split their previous six playoff meetings, and the teams meet for the first time since the Flyers defeated the Canadiens in five games of the 2010 East finals.

Tyler Johnson scored for the Lightning, and Andrei Vasilevskiy stopped 26 shots. Tampa Bay was coming off a 3-2 win over Boston on Wednesday, and also had a 3-2 shootout win over Washington.

Hedman, a Norris Trophy finalist this year, went down as he spun around to skate backward at the Tampa Bay blue line with Pitlick driving up the right wing. Hedman then got up slowly and broke his stick while heading down the tunnel to the locker room.

“You hate to see any of your teammates have to leave a game. Obviously, we know the significance and the role that Heddy plays on our team," Lightning defenseman Ryan McDonagh said. “It was tough to see but we've got to roll with what happens.”

Tampa Bay will enter the first round of the playoffs as the East’s second seed.

The Lightning will face the winner of the best-of-five preliminary round series between eighth-seeded Toronto and ninth-seeded Columbus, which will be determined in Game 5 on Sunday. The Lightning were swept by the Blue Jackets in a first-round meeting last year, and after Tampa Bay won the Presidents’ Trophy. The Lighting and Maple Leafs have never met in the playoffs.

Aube-Kubel, who has seven goals in 45 career NHL games, enjoyed his first career NHL two-goal outing by staking the Flyers to a 2-0 lead by scoring less than seven minutes apart in the first period.

A Lightning turnover in their own zone led to Aube-Kubel standing in front and deflecting in Shayne Gostisbehere’s shot from inside the blue line 7:40 in.

His second goal came on a 2-on-1 break during which he converted Sean Couturier’s pass from the right wing.

“There's a young man that figured out what it would take for him to play at this level,” Flyers coach Alain Vigneault said of Aube-Kubel. "He deserves the ice time and he deserves to be playing right now.”

Vigneault also credited Hart for making two clutch saves on Lightning sniper Nikita Kucherov, who got behind the Flyers defense twice in the opening seven minutes

“We bent a little bit. We didn’t break, a lot of it thanks to Carter,” Vigeneault said.

Farabee then sealed the victory by one-timing in Gostisbehere’s pass into the right circle to put the Flyers ahead 3-1 with 5:38 left in the second period, and 10 minutes after Johnson scored a power-play goal.

NOTES: Flyers RW Jakub Voracek did not play for an undisclosed reason. He had an assist in two games. ... Lightning made one rosrter change from Game 2, with D Zach Bogosian returning to the lineup and D Jan Rutta scratched. ... Vasilevskiy appeared in his 36th career playoff game, tying Ben Bishop for the most in team history. Bishop started all 36 appearances, while Vasilevskiy ranks third with 31 starts, two behind Nikolai Khabibulin.

Flyers: Face Montreal in first round of playoffs.

Lightning: Face Columbus or Toronto in first round of playoffs next week.