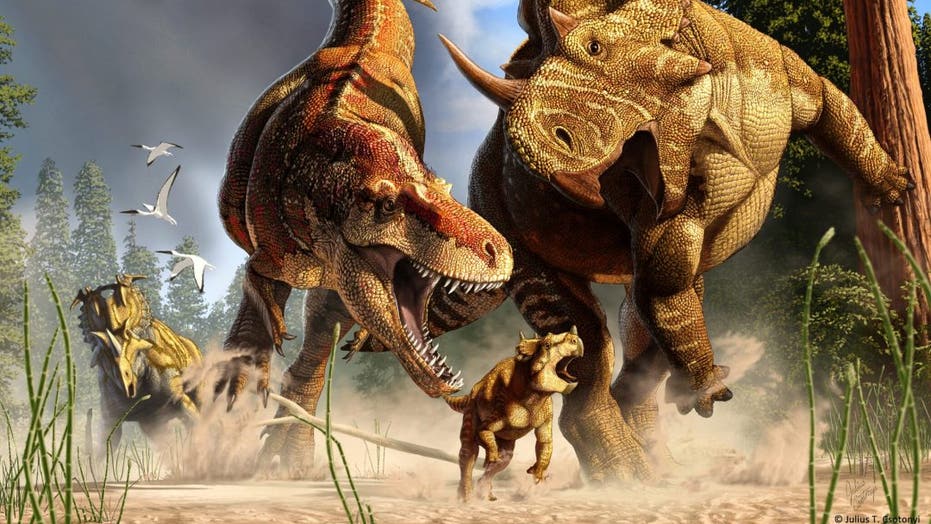 Like Michael Jordan on a basketball court, the Tyrannosaurus rex is among the most well-known and terrifying dinosaurs to roam the planet. But a new study shows that the super predator may have had more in common with Shaquille O'Neal than his Airness.

The research shows that T. rex had long legs that were beneficial for long, marathon walks to catch its prey, as opposed to all-out sprinting.

“The assumption tends to be that animals with adaptations for running, such as long legs, are adapted for a higher maximum speed, but this paper shows that there's more to running than top speed,” said one of the study's co-authors, Thomas Holtz, in a statement. “When you’re a bigger animal, those adaptations may also be for endurance and efficiency. It may be about being a marathoner rather than a sprinter.”

In this artist's depiction of wildlife from Alberta, Canada, 77 million years ago, the tyrannosaur Daspletosaurus hunts a young horned Spinops, while an adult Spinops tries to interfere and Coronasaurus watches from a distance. (Credit: Julius Csotonyi)

More than 70 species of dinosaurs (known as therapods) were analyzed by the experts, who looked at metrics such as limb proportions, size ratio, body mass and gaits to get an estimate of their top speeds. For dinosaurs that weighed over 2,200 pounds, longer legs allowed them to move more efficiently, but not as fast as their smaller rivals.

Therapods walked the Earth from 252 million to around 66 million years ago. Their ability to walk on two legs is believed to be a huge part of their success, the researchers noted.

The lack of high-end speed for a T. rex, compared to small or average-sized dinosaur was actually to their benefit, Holtz explained, citing the ability to save energy.

"That’s actually a very beneficial savings, because predators tend to spend a great deal of their time foraging, searching for prey,” Holtz added. “If you are burning less fuel during the foraging part of the day, that's an energy savings that dinosaurs with shorter leg forms didn't get.”

The study was published in the scientific journal PLOS ONE.

DINOSAURS MAY HAVE BEEN POISONED BEFORE THEY BECAME EXTINCT, STUDY REVEALS

Researchers have learned a great deal about the anatomy of the Tyrannosaur in recent months.

In January, a new study confirmed the most fearsome dinosaur to ever walk the Earth underwent a massive growth spurt as a teenager, citing two fossils found in the early 20th century.

In September 2019, a study was published that suggested the terrifying dinosaur had a stiff skull that allowed it to not shatter its own bones with its bite force, while simultaneously devouring its kill.

In addition to having a stiff skull, T. rex likely had something similar to an "air conditioner" in its head, allowing it to stay cool while hunting, according to a separate study.