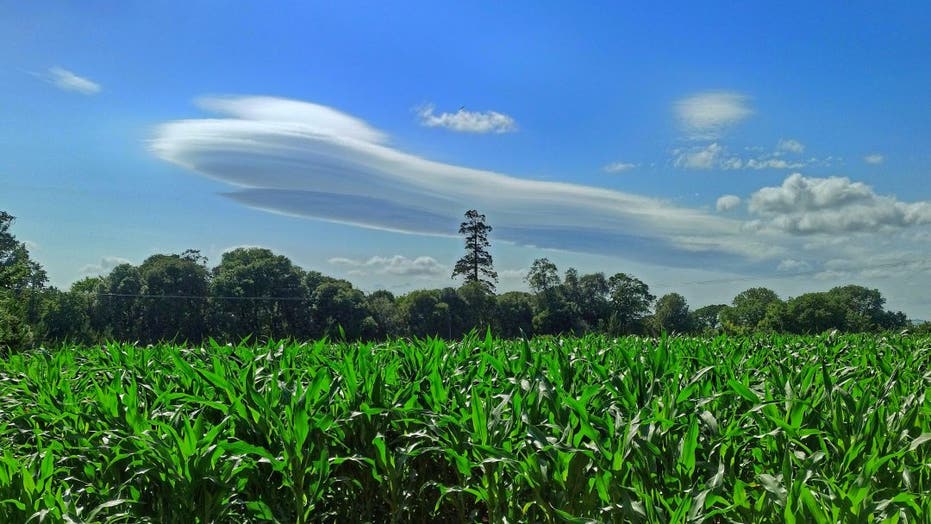 The truth is out there — and it's up in the clouds.

A photographer has captured incredible pictures of a "flying saucer" cloud in Britain above the River Exe, British news agency SWNS reports.

Stuart Woogler took the pictures while going for a bike ride between Exmouth and Lympstone on June 22. Known as Lenticular clouds, the clouds have been likened to UFOs or the USS Starship Enterprise because of their odd shape.

The enormous cloud - which was likened to the Starship Enterprise - was captured floating above the River Exe. (Credit: SWNS)

"I knew it was a Lenticular cloud because I had seen one many years ago in New Zealand, but had never seen one in the U.K.," Woogler, 53, said. "Being a keen photographer I didn't want to miss a chance of getting a shot of this amazing sight."

Woogler continued: "I cycled toward the estuary taking a few shots on route, but wasn't 100 percent happy with them and carried on pedaling to find a spot where I could get a nicer photo."

The images were taken by Stuart Woolger who noticed a "strange cloud formation" while cycling between Exmouth and Lympstone in Devon on June 22. (Credit: SWNS)

Because they are oddly shaped and look like UFOs, lenticular clouds are "believed to be one of the most common explanations for UFO sightings across the world," according to the U.K.'s Met Office.

These "lens-shaped" clouds typically form "where stable moist air flows over a mountain or a range of mountains," according to EarthSky.org, which added that lenticular clouds "can appear and disappear relatively quickly."