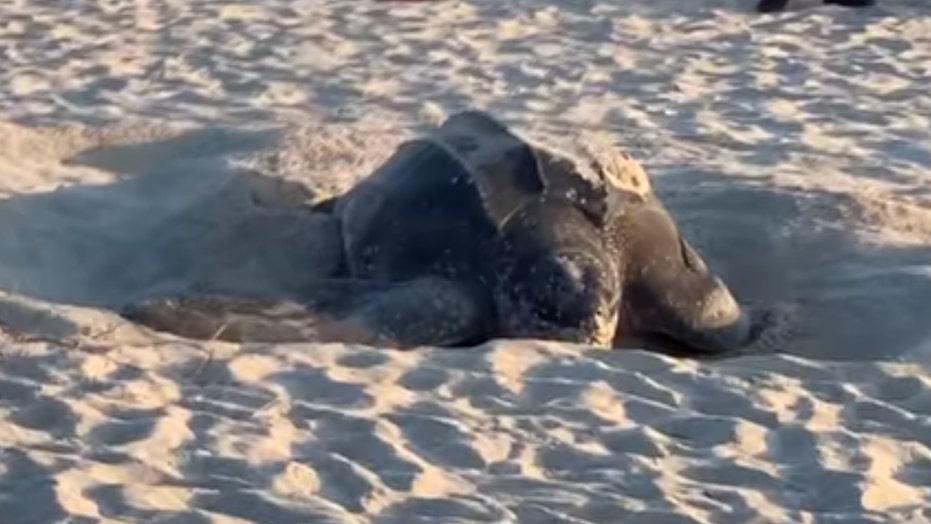 A massive 800-pound endangered leatherback sea turtle delighted visitors at a Florida beach ahead of Memorial Day weekend when they saw it nesting near the waterfront.

A University of Central Florida (UCF) turtle researcher named David Rodriguez was surveying the beach Thursday morning when he encountered a group of people watching the gigantic animal, Fox 13 reported.

Kate Mansfield, an associate professor at UCF, later tweeted that the turtle had been tagged in 2016 in Juno and was named Vienna.

Leatherbacks are endangered, according to the U.S. Fish and Wildlife Service.

And even so, they are usually seen at nighttime, not in the sunlight, Rodriguez told Fox 13.

“It was something of an anomaly,” he told the outlet. “You never seen those leatherbacks in the daytime. Even at night it is a chance. It was amazing.”

Shelley Michel, a local photographer, heard about the sighting and rushed to the scene to document the rare occurrence.

“She is beautiful,” Michel says in her video. “I can't believe after years of trying, I finally got to see one.”

Leatherbacks can grow up to 8 feet in length and weigh as much as 2,000 pounds, according to the wildlife service, making Vienna relatively small, even if she left a huge impression on the people who saw her.

The sea turtles general nest from March to July inS the U.S. The typical female nests about 5 to 7 times and leaves 80 to 85 eggs in each locations in a given season. The eggs incubate for 55 to 75 days and hatch at night.

Their population has dramatically fallen over the years due to human consumption of their meat and eggs, commercial fishing and ocean pollution, among other factors, according to the wildlife service. Hatchlings can also become disoriented by artificial lights near their nests when they first emerge.