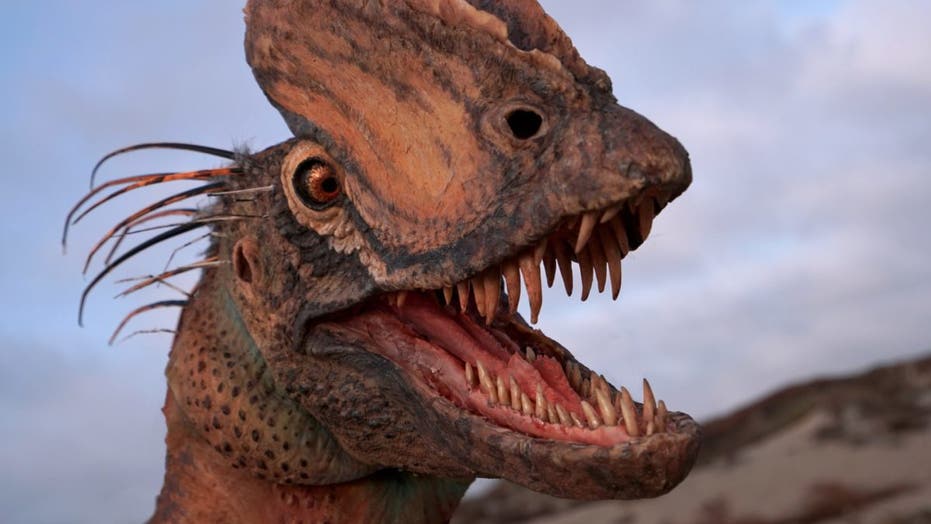 It's a discovery, 65 million years in the making.

Even though Dilophosaurus was a beautiful, but deadly addition to Jurassic Park, the hit movie of the same name was wildly incorrect in how it portrayed the deadly dinosaur, a new study suggests.

The research, published in the Journal of Paleontology, notes Dilophosaurus was significantly larger than it was portrayed in the movie, reaching up to 20 feet in length and had more in common with modern-day birds than previously believed.

An artist's interpretation of Dilophosaurus based on the latest research. (Credit: Brian Engh / The Saint George Dinosaur Discovery Site)

“It’s pretty much the best, worst-known dinosaur,” said the study's lead author, Adam Marsh, in a statement. “Until this study, nobody knew what Dilophosaurus looked like or how it evolved.”

At nearly 20 feet in length and weighing up to three-quarters of a ton, it was approximately half the size of a full-grown, adult Tyrannosaurus rex. During their teenage years, T. rex's had massive growth spurts, Fox News previously reported.

Early descriptions of the dinosaur depicted it as having a fragile crest, weak jaws and spitting venom to paralyze its prey, which was seen in the movie. However, Marsh and his team found that in addition to its large size, it had a strong jaw, with powerful muscles and bones that were marked with air pockets to reinforce its skeleton.

“They’re kind of like bubble wrap – the bone is protected and strengthened,” Marsh added.

The air pockets, or air sacs, are not only found in birds, but have been discovered in some larger dinosaurs as well, aiding in making their bones lighter, while allowing birds to take flight.

Scientists have found evidence that the Dilophosaurus’ skull served as scaffolding for powerful jaw muscles, shattering the image of the dinosaur as more fragile and svelte that has been promoted in scientific literature and popular culture. Credit: Skull reconstruction by Brian Engh, commissioned by The Saint George Dinosaur Discovery Site.

The first Dilophosaurus fossils were found in 1940, according to National Geographic, which Marsh looked at, along with a couple of other fossils, to paint a more accurate picture of the dinosaur.

“Dilophosaurus is clearly built for being a big macropredator,” Marsh told the news outlet. “It’s a large-bodied animal that was built for eating other animals.”

Marsh eventually used an algorithm to compare the other fossils with the first fossil to confirm they were Dilophosaurus. The algorithm also pointed out there is a "significant evolutionary gap" between Dilophosaurus and its closest relatives, meaning there are probably other relatives that have not yet been discovered.

FOSSIL OF TERRIFYING MEGARAPTOR, WITH 14-INCH CLAWS, DISCOVERED IN ARGENTINA

Dilophosaurus' famous headcrest is seen in "Jurassic Park," which grossed over $1 billion at the box office and spawned several sequels. The headcrest is one aspect the movie got right, Marsh noted, adding it may have been used in a mating ritual to woo mates.

Though the hit Steven Spielberg movie got many aspects of Dilophosaurus wrong, it did get one important part right: the deadly dino lived in the early Jurassic period, which took place between 201 and 174 million years ago.