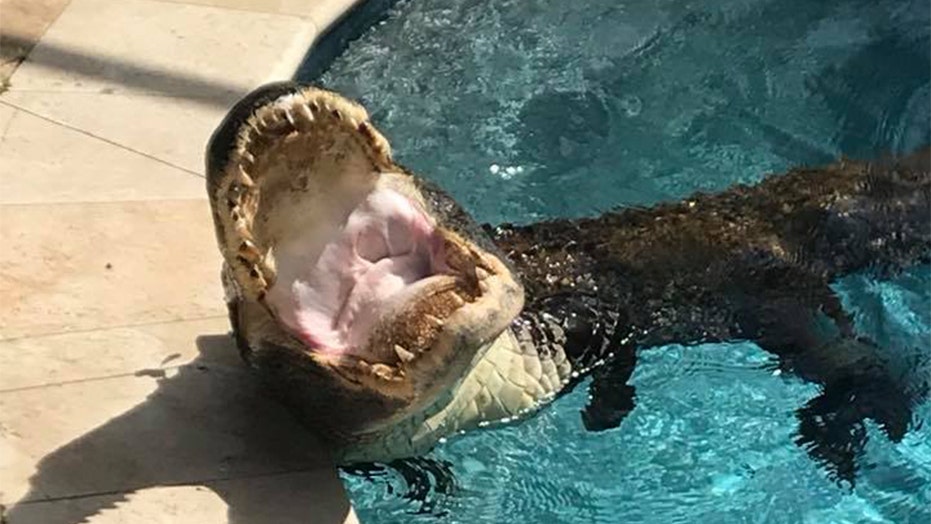 A family vacationing in South Florida last year came across an unlikely sight: a live gator perched on top of a gator pool float at their Airbnb.

Georgia resident Dave Jacobs said his family was in Miami for a wedding. They first noticed the alligator in the lake outside of their vacation rental in May 2019. It appeared to catch the attention of their dog, Rascal, who spent the day barking and running around the screened-in pool deck near the taunting reptile.

"We thought that was pretty cute," Jacobs told the Miami New Times. "Then, the next day, it just showed up in the pool."

After seeing double, Jacobs said his 14-year-old daughter described the sight as "so meta."

He said his wife called the Airbnb's owner, who eventually got a gator wrangler to fish the real reptile out of the pool.

"I guess it's not that unusual, but it was unusual to me," Jacobs told the paper.

A 9-foot alligator being wrangled out of a pool in Odessa, Fla on聽April 19, 2018. (Hillsborough County Sheriff's Office)

ALLIGATOR RUMORED TO HAVE BEEN HITLER'S, SURVIVED WWII BOMBING IN BERLIN, DIES IN MOSCOW ZOO AT 84

Jacobs said his family eventually left the home to make the trek back to Georgia, taking with them a unique Florida experience to share with friends and family.

"We have gators in Georgia, but they're just in areas that are not as populated, like some swamp where no one lives," Jacobs told the Miami New Times. "But in Florida, they're just in your neighborhoods."