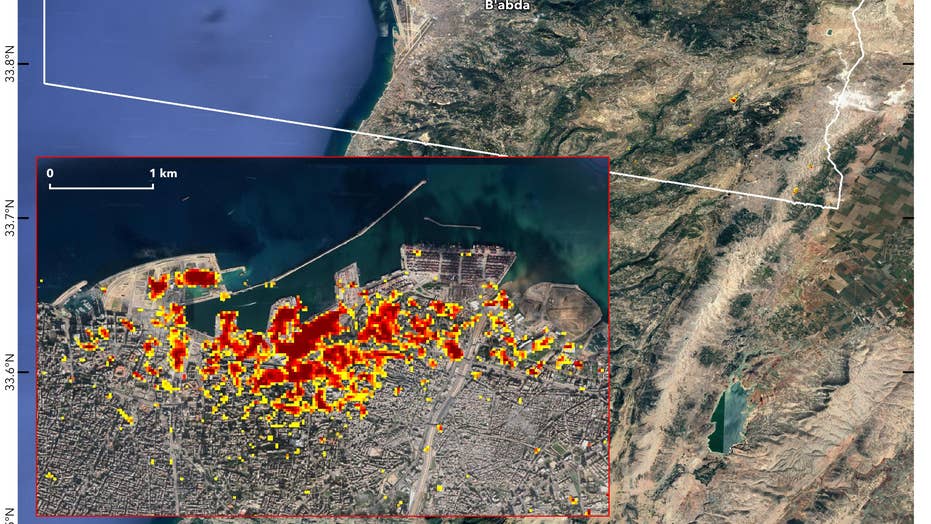 Raw video captures the moments after a massive explosion.

NASA has used satellite data to map the devastation caused by the deadly blast that rocked Beirut last week.

Modified data from the European Space Agency’s Copernicus Sentinel satellites was used to produce the map.

The data was analyzed by scientists at NASA's Advanced Rapid Imaging and Analysis (ARIA) team at the space agency’s Jet Propulsion Laboratory at Caltech. The Earth Observatory of Singapore also participated in the project.

“Maps like this one can help identify badly damaged areas where people may need assistance,” said NASA, in a statement.

On the map, dark red pixels – like those present at and around the Port of Beirut – represent the most severe damage. Areas in orange are moderately damaged and areas in yellow are likely to have sustained somewhat less damage. Each colored pixel represents an area of 33 yards. (Credits: NASA/JPL-Caltech/Earth Observatory of Singapore/ESA)

On the map, the most severely damaged areas are shown in red and areas moderately damaged are orange. Each colored pixel represents an area of 33 yards, according to NASA.

The Aug. 4 explosion in Beirut’s port sent a shock wave that killed at least 160 people, wounded nearly 6,000 and defaced the coastline of the capital city — destroying hundreds of buildings.

The explosion has been linked to a 2,750-ton stockpile of ammonium nitrate that had been stored in a hangar at the Beirut port since it was confiscated from a ship in 2013. The cargo is believed to have detonated after a fire broke out nearby.