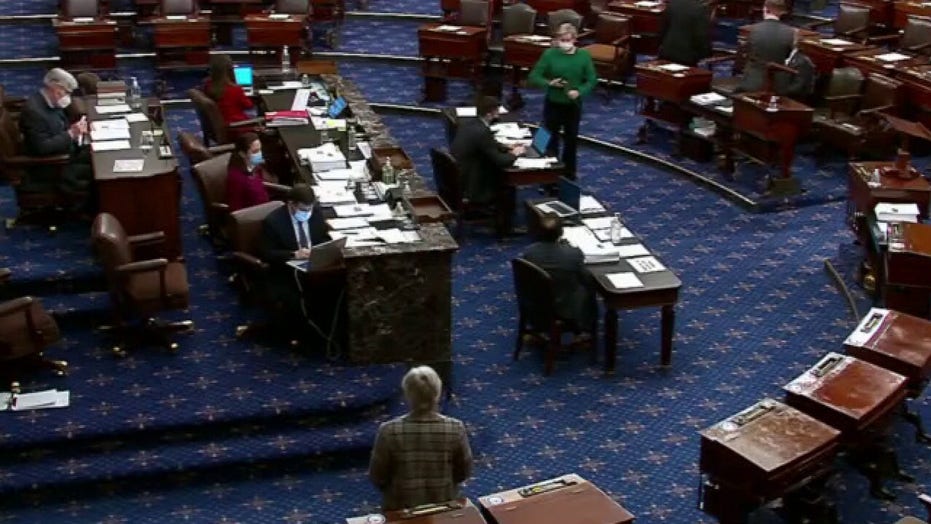 Senate to undergo 'marathon' of votes on COVID relief bill

A final vote on the Senate’s massive coronavirus stimulus package was appearing unlikely early Saturday – and the outlook for later in the day or even Sunday was appearing grim as well.

That’s because Senate Republicans were insistent on conducting individual votes on a multitude of amendments, Fox News was told.

The pessimistic outlook came despite Senate leaders reaching a deal with moderate Democratic Sen. Joe Manchin on emergency jobless benefits that was announced Friday night. An amendment based on the deal reached with Manchin was approved around 1 a.m. Saturday on a 50-49 vote.

The provision, which was not in the House-passed legislation, would apply only to households with annual incomes under $150,000. The agreement also would extend tax rules regarding excess business loss limitations for one additional year, through 2026.

Closer to 2 a.m. ET Saturday, the Senate rejected 51-48 an amendment proposed by Sen. Marco Rubio, R-Fla., that called for schools to be open at least 50% of the time for at least 50% of students in order to receive funding

Just before 2:30 a.m. ET, the Senate in a 51-48 passed an amendment requiring schools to have a safe COVID-19 return plan for students within 30 days of receiving aid.

After setting a record for the longest roll call vote in Senate history -- nearly 12 hours – on Friday night, the Senate had finally returned to the vote-a-rama after 11 pm.

A vote-a-rama is where senators cast votes around the clock on amendment after amendment. Last week, the U.S. House didn’t even begin its debate on its version of the coronavirus bill until nearly 11:30 p.m. Feb. 26. The House ultimately passed its bill around 2 a.m. Saturday morning, Feb. 27.

It was impossible to gauge how many potential amendments the Senate would consider in the hours or days ahead -- or how long the process would ultimately take. Senators on both sides seemed to dig in for a long battle as Friday night turned into Saturday morning.

One possible scenario: The Senate could take the process late into Saturday night and conclude with a vote in the wee hours of Sunday morning.

Looking ahead, Democrats have a number of advantages heading int an eventual vote – including one that’s attributable to tragic circumstances on the Republican side of the aisle. On Friday, U.S. Sen. Dan Sullivan, R-Alaska, left Washington and headed home after learning his father-in-law had died.

Sullivan’s absence means Democrats might not need to court a Republican to vote yes on the bill -- and probably won’t need Vice President Harris, as president of the Senate, to cast a tie-breaking vote.

Once the Senate manages to pass its bill, the measure would return to the House for reconciliation.

Senate Democrats were hoping to keep changes to a minimum in their bill. But instead they’ve had to strip out an increase in the minimum wage to $15 because of the chamber’s own budget rules.

In addition, Friday’s power play by Manchin, to reduce extra unemployment benefits from $400 to $300 a week was already infuriating House liberals.

That could well mean major headaches between moderate and liberal Democrats in the House. One group may ask why Manchin got everything he wanted – while the other may hold their noses and vote for the bill.

House Democrats can stand to lose only four votes on their side and still pass the bill without assistance from Republicans. But holding the line at four could be a challenge for House Speaker Nancy Pelosi, D-Calif., and President Biden after the Senate completes its changes to the bill.