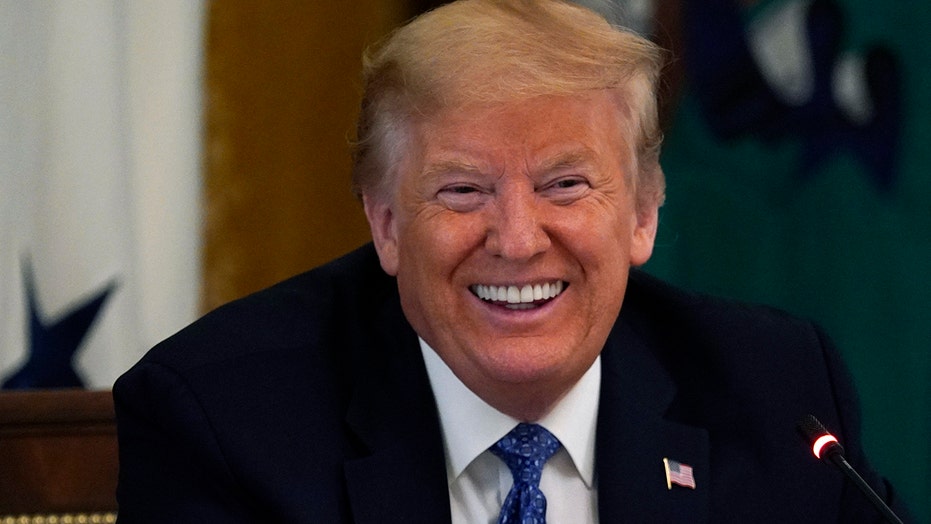 President Trump slammed workers from the Department of Veterans Affairs (VA) who have been fired under his administration in comments Friday at a White House Memorial Day ceremony to remember prisoners of war and deceased veterans.

In his wide-ranging but brief comments, the president also paid tribute to fallen American service members, spoke about "rebuilding" the military, touched on reopening houses of worship during the coronavirus pandemic, and mentioned the criticism he received over his order to ban incoming travel from China during the initial phases of the disease's outbreak.

Trump praised Secretary of Veterans Affairs Robert Wilkie before touting the reforms his administration has made to the department and slamming how it was previously run.

"You know the stories were legendary, you don't hear bad things about the VA anymore," Trump said. "You used to turn on every night, you'd see a horror show. So I want to thank you, you've done a fantastic job, Robert."

Trump in 2017 signed the Department of Veterans Affairs Accountability and Whistleblower Protection Act, which was aimed at protecting whistleblowers and making it easier to fire problematic employees at the VA.

Trump, while discussing rebuilding the military, said that before he assumed office "our military was depleted just like the shelves were empty from medical equipment," referencing ventilator shortages when the coronavirus pandemic first hit. Trump also said that the military now has "the greatest equipment, the finest equipment it's ever had ... all made in America."

On the topic of remembering fallen veterans, Trump said those who have given their lives in the armed forces are "etched forever" into the fabric of the United States.

"Together our nation pays a mortal tribute to the extraordinary courage, unflinching loyalty, and unselfish love and supreme devotion of the American heroes who made the ultimate sacrifice," Trump said. "They laid down their lives to ensure the survival of American freedom, their names are etched forever into the hearts of our people and the memory of our nation."

The ceremony was held with motorcyclists from the "Rolling Thunder," which is widely known for its support of veterans, in attendance. The group changed its name to "Rolling to Remember" for Memorial Day.

Trump, seeming to embrace a rally atmosphere before "Sweet Child O' Mine" by Guns 'n Roses was blasted for ambiance as "Rolling to Remember" did a ride on the White House grounds, noted that "bikers" have been a reliable fount of political support for him.