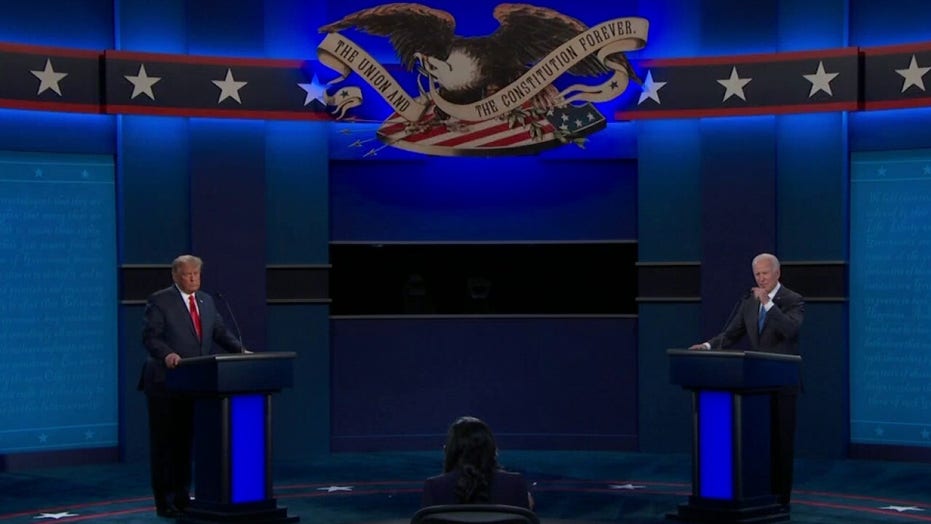 The final debate of the 2020 presidential election between President Trump and Democratic nominee Joe Biden involved heated but substantive exchanges between the bitter rivals on issues from the coronavirus to the economy.

It also addressed the latest bombshell to rock the 2020 campaign: allegations that Biden was involved in the foreign business dealings of his son, Hunter. (The Democrat and his campaign have denied this).

The debate came against the backdrop of one of the busiest times ever in modern American politics, with the Senate working on a Supreme Court confirmation; the pandemic still raging and Congress working on an economic relief bill to deal with its fallout; revelations about the nature of Russian and Iranian meddling in the election; and much more.

All of this of course comes 12 days before Election Day and as Americans are casting ballots daily due to the increased emphasis on mail-in voting during the pandemic -- which has spawned a bevy of election lawsuits, themselves their own major political issue.

But on Thursday night Trump and Biden gave Americans who may still be deciding on their vote a stark but substantive contrast in their visions for the United States.

Here are the top 5 moments of the final presidential debate: 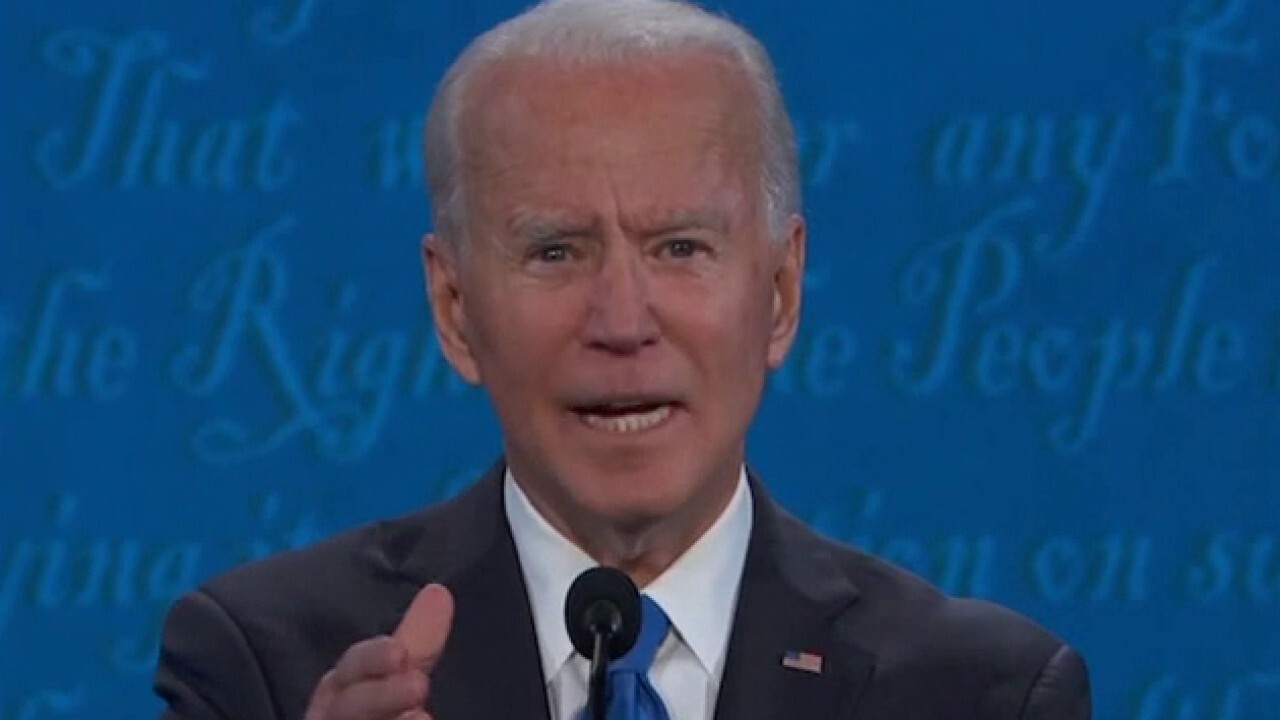 Allegations have surfaced in recent days that Biden was involved with his son Hunter's foreign business dealings, though the Democrat and his campaign has denied this. Ahead of the debate, a business partner of Hunter Biden's gave an on-camera statement claiming Joe Biden was aware of the dealihis son's work. Further reporting from the Wall Street Journal, however, has cast doubt on any role of Joe Biden in Hunter Biden's ventures, specifically in China.

When the issue came up at the debate, Trump slammed Biden for "the horrible emails," while Biden forcefully denied making any money from foreign sources.

"I think you owe an explanation to the American people," Trump said. 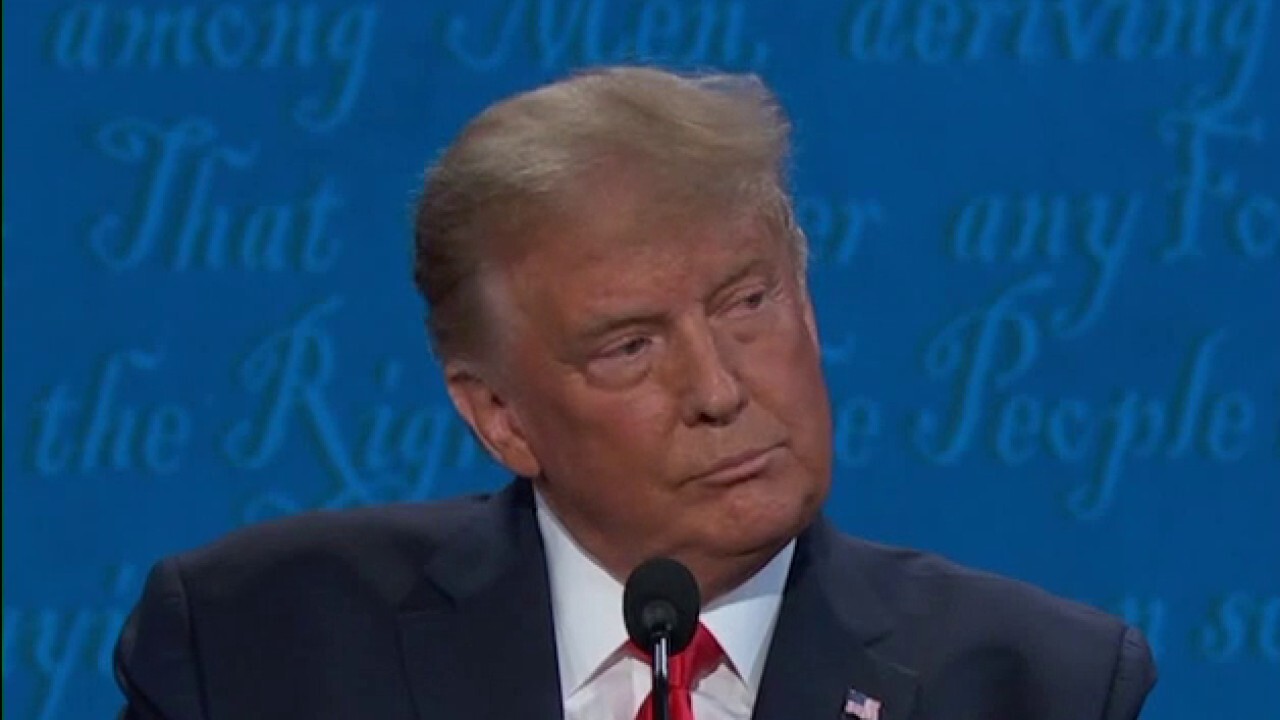 Biden responded: "I have not taken a penny from any foreign source ever in my life." Turning to attack Trump, Biden added: "We learned this president paid 50 times the tax in China, has a secret bank account with China. Does business in China."

Trump said he would release his tax returns -- despite saying that same thing for years and not yet doing so.

BIDEN PRESSED ON HUNTER BIDEN BUSINESS QUESTIONS AT DEBATE, INSISTS 'NOTHING WAS UNETHICAL'

Tony Bobulinski, the former Hunter Biden business partner, was even in attendance at the Thursday debate, a guest of the president. 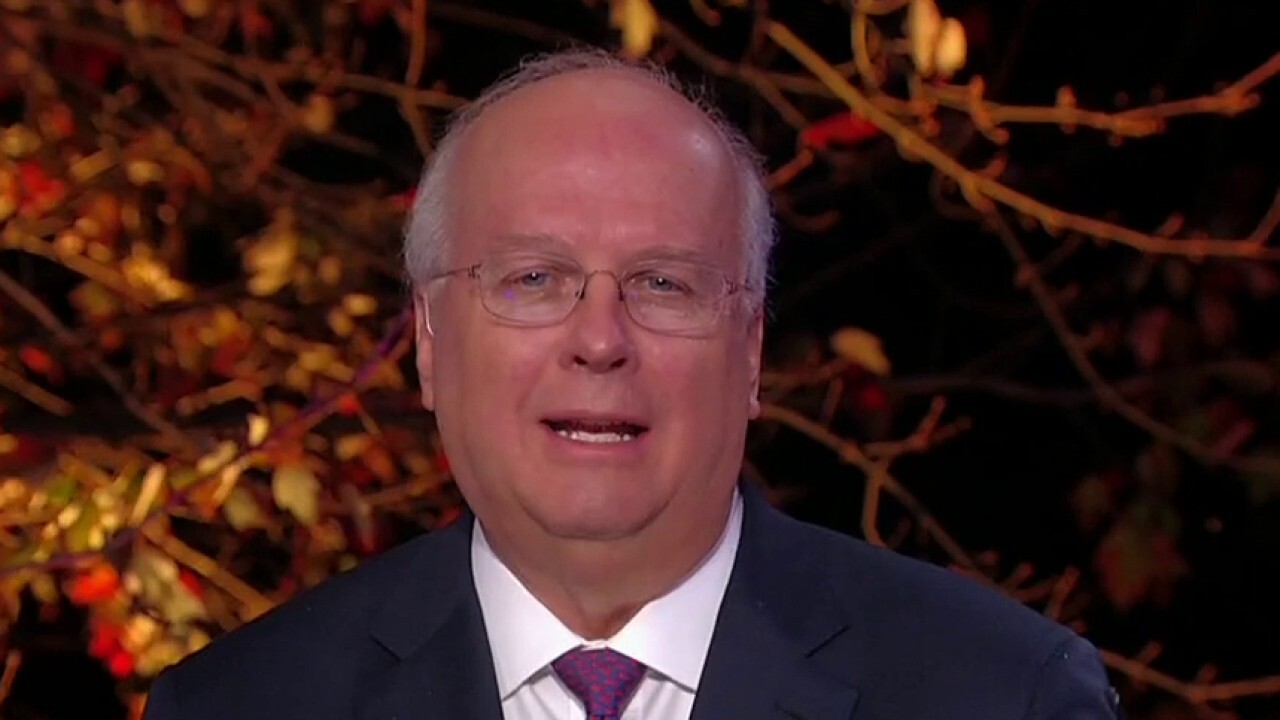 Another contentious moment in the debate came as the candidates sparred over immigration policy.

Trump attacked Biden for the Obama-Biden administration's "catch-and-release" policy, in which illegal immigrants were allowed to walk free ahead of their court dates after being arrested for being in the country illegally. Conservatives have said that allows those immigrants to miss their court dates and disappear into the country. Biden meanwhile attacked Trump on the current administration's family separation policy, which before it ended in 2018 was highly controversial.

"Parents ... kids were ripped from their arms and they were separated ... those kids are alone, nowhere to go," Biden said of the policy. 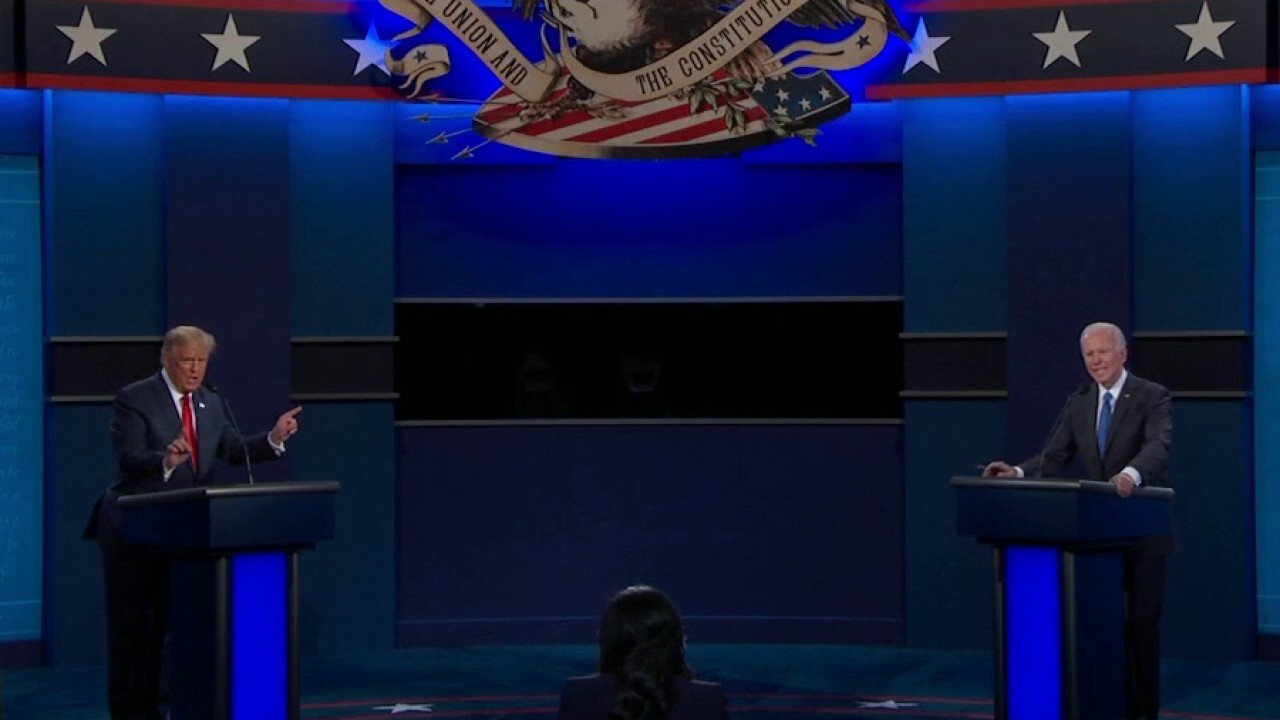 TRUMP, BIDEN REFRAIN FROM INTERRUPTING EACH OTHER

Trump replied by pointing out that the infrastructure for many of the controversies on the border in the past four years was carried over from the Obama-Biden administration.

On "catch and release," Biden disputed that most illegal immigrants did not show up for their court dates. Trump said that they largely did not.

"Those with the lowest IQ, they might come back," Trump added.

"You have 525 kids not knowing where in God's name they're going to be and lost their parents," Biden replied, bringing up the family separation policy again.

"Go ahead," Trump quickly said to Welker as she moved on to another topic.

The comments from Trump during this exchange, potentially perceived as callous, could be his biggest blunder of the night as he tries to appeal to centrist and suburban voters.

After Welker asked Biden about whether increasing the minimum wage to $15 per hour might hurt small businesses, Biden appeared not to understand the question and advocated for small-business bailouts.

'He said we have to help our small businesses, by raising the minimum wage? That's not helping.'

"We're going to have to bail them out too," Biden said. "We should be bailing them out now, these small businesses, We've got 1 in 6 of them going under. They're not going to be able to make it back."

Biden replied that "No one should work two jobs, one job, be below poverty. ... And there is no evidence that when you raise the minimum wage businesses go out of business."

This exchange may be considered Biden's biggest blunder of the evening, as he appeared to initially completely miss the point of Welker's question. The moment also played into Trump's larger economic message, which his allies have been practically begging him to highlight in the late stages of the campaign.

Biden was at his most effective Thursday when delivering one-liners either attacking Trump or highlighting what kind of president he would be. Among them were comments that he would "shut down the virus, not the country," and that Trump "should have been instead of in a sandtrap at his golf course, he should have been negotiating with Nancy Pelosi," on a coronavirus deal.

'This guy is a dog whistle about as big as a foghorn.'

There were also other such one-liners on other topics, including Biden's plans to be an "American" president.

But the most memorable came during an exchange on race relations.

"He pours fuel on every single racist fire," Biden said. "He started off his campaign coming down the escalator saying he's getting rid of those Mexican rapists. He banned Muslims because they're Muslims."

Biden added: "This guy is a dog whistle about as big as a foghorn."

The comments from Biden were in response to claims from Trump that he is "the least racist person in this room."

"I got criminal justice reform done and prison reform, and opportunity zones," the president said, elaborating on his race record. "I took care of black colleges and universities." 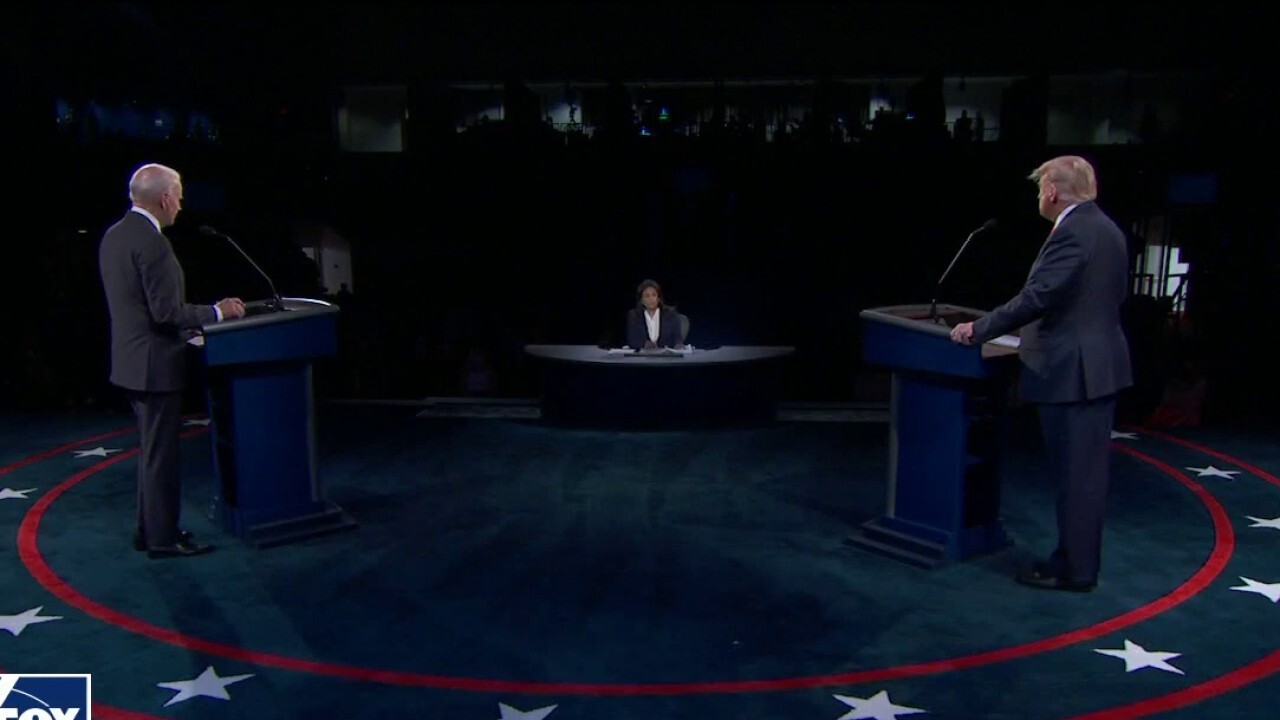 "Anybody responsible for that many deaths should not remain president of the United States of America," Biden said of Trump's handling of the pandemic that's killed over 200,000 Americans.

"We can’t lock ourselves in a basement like he does. ... He has this thing about living in a basement," Trump said, echoing his previous exhortations to Americans to not be afraid of the virus.

Those comments encapsulated the two very different visions of how to handle the pandemic presented by the two candidates in a lengthy segment on the pandemic.

Trump claimed the U.S. was "rounding the corner" and that the virus was "going away" and perhaps made some news in saying a vaccine was "going to be announced within weeks."

The president specifically mentioned Johnson & Johnson, Moderna and Pfizer as companies whose vaccines have shown promise as part of Operation Warp Speed, the public-private partnership to manufacture coronavirus vaccines and then distribute them once they are approved by the Food and Drug Administration (FDA).

"'All you teachers out there, not that many of you are going to die, so don't worry about it,'" Biden said, portraying that as Trump's attitude on the pandemic. "Come on."

In the category of Biden one-liners, he turned around Trump's comments that the U.S. was learning to live with the coronavirus, and said that Americans as the pandemic stands right now were "learning to die" with the disease.