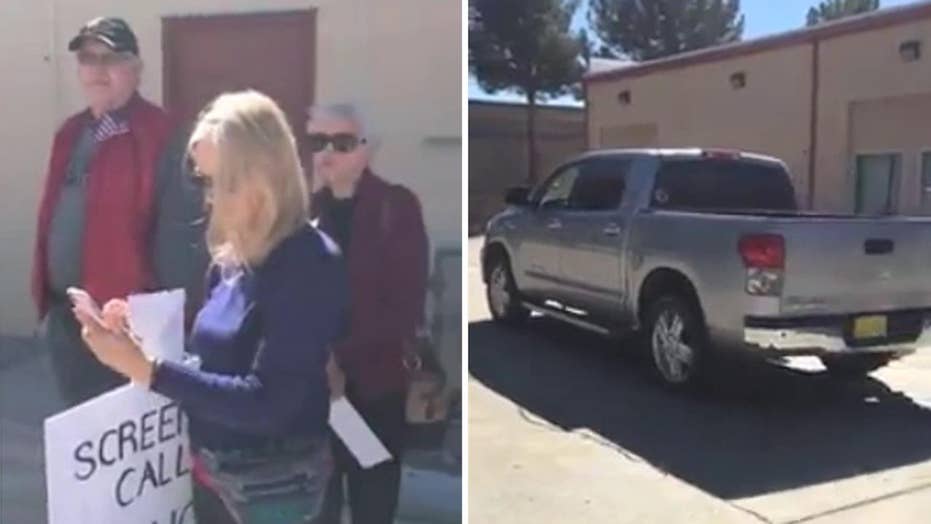 When the constituents for a congressman in New Mexico showed up at his office to demand a town hall meeting, the door was practically slammed in their faces by his staff.

More than fifty people from the town of Truth or Consequences in New Mexico’s second congressional district traveled over 100 miles to the office of their Republican congressman, Steve Pearce, in the city of Las Cruces. They were looking for truth but Pearce and his staff might have learned the consequences of not listening to their district.

The group of constituents had arrived to Pearce’s field office during business hours on Thursday for the opportunity to speak to the congressman face-to-face about his support for President Trump. But when they showed up the office was closed while staffers hid inside and left ringing phones unanswered, according to blog ProgressNow NM.

Some staffers even tried to sneak out the back door -- literally. A video of the attempt was provided to Fox News.

When I saw [the staffer leaving] I immediately started recording,” Lucas Herndon of ProgressNow NM told Fox News. “The whole thing was a disgrace to a true democracy for them to hide like that.

“The word 'cowardly' comes to mind.”

The awkward meeting between the congressman’s staff and his constituents unfolded after a telephone town hall held by Pearce. The event got off to an awkward start after angry voters took to Twitter to complain.

@RepStevePearce u need 2 come 2 NM & have in person town halls-this call was NOT productive for anyone but the 10 cherry picked questioners.

@RepStevePearce why didn't you do a town hall in person? You represent us. You need to be here. What are you afraid of? Seek the truth

It was around 1:30 p.m. the next day when the group of electors showed up to the field office. As they were meeting in the parking lot, some in the group noticed Pearce’s outreach coordinator Peter Ibardo get into his car and try to drive away.

“I’ve dealt with Peter in the past. I wasn’t surprised that his reaction was to leave,” Herndon said.

When he was stopped by one of the people from the crowd, Ibardo told them that the staff was in the office to meet with them before he sped off. But the staffers had locked the door, according to Herndon, who said they also refused to answer the phone.

“It was all very strange,” Herndon added. “I was a little taken aback that he confirmed that there was staff in there to speak with us when they clearly didn’t want to speak with us.”

As the crowd of voters grew, they eventually moved to the sidewalk and began a peaceful demonstration for about an hour.

Officials for Rep. Pearce’s office did not immediately return requests for comment.

Perry Chiaramonte is a reporter and producer with Fox News Channel's Investigative Unit. Follow him on Twitter at @perrych