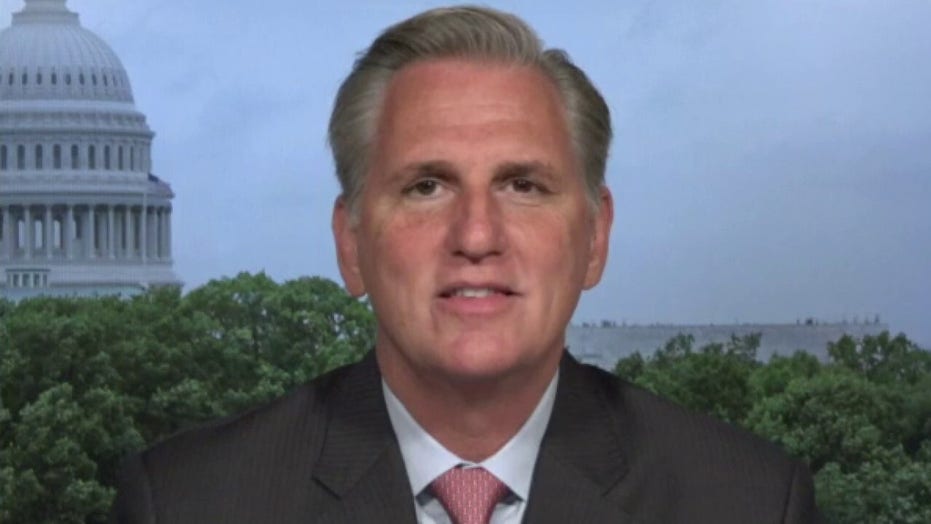 House Republicans filed a lawsuit against Speaker Nancy Pelosi to block a system of proxy voting put in place during the coronavirus pandemic; reaction and analysis from House Minority Leader Kevin McCarthy.

House Minority Leader Kevin McCarthy, R-Calif., on Wednesday decried Democrats on the first day of proxy voting in the House of Representatives.

Democrats pushed for the new rule, allowing fellow lawmakers to be cast votes on their behalf, because of expected Capitol absences amid the coronavirus outbreak. Republicans reacted with a lawsuit against House Speaker Nancy Pelosi.

“A Democrat from Maryland just voted seven times on legislation in Congress,” McCarthy tweeted Wednesday. “This is NOT what the Founders had in mind when they created representative democracy. One representative should equal one vote."

McCarthy was likely referring to U.S. Rep. Jamie Raskin, D-Md., who planned to vote on behalf of several colleagues, according to NPR.

Rep. Don Beyer, D-Va., was another lawmaker expecting to cast multiple votes, a reporter from The Hill wrote on Twitter.

Beyer referred to the proxy arrangement as "common sense" during a pandemic.

Under the temporary rules change passed earlier this month, one member can vote for up to 10 colleagues, who send their wishes for each vote, for 45 days.

The party-line vote allows for temporary proxy voting for 45 days for the first time in the chamber’s history.

"For 231 years, never have we seen a proxy vote on the floor of the House," McCarthy said in a news conference with other Republicans Wednesday morning. "...We look at the history of America through the Yellow Fever of 1793, the Civil War, the burning of this Capitol during the War of 1812, the Spanish Flu of 1918, and even 9/11. Congress has never flinched from its constitutional duty to uphold and assemble inside this body."

Rep. Liz Cheney, R-Wyo., who says she remains open to the idea of remote voting during the crisis and was named as a plaintiff on the lawsuit, said the vote was a show of “partisanship.”

"This is not a time for partisanship. It's not a time to try to take partisan advantage of a crisis,” she said in a news conference, according to NPR.

More than 70 Democrats and no Repubicans chose to vote by proxy while staying away from the Capitol due to the pandemic.

"In times of crisis, our nation must adapt,” Rep. Vicente Gonzalez, D-Texas, who is recovering after falling 12 feet while working on his home and chose to vote by proxy, said, NPR reported. “It's past time we modernized Congress' voting system to allow for remote voting during national emergencies. Proxy voting allows for Members of Congress to continue working for the people while following the advice of medical professionals to limit the spread of COVID-19.”

Other countries have adopted rule changes during the coronavirus pandemic to allow for some remote and virtual proceedings, such as Canada, Brazil and the European Union. The British House of Commons broke 700 years of history last month by convening Parliament via Zoom.