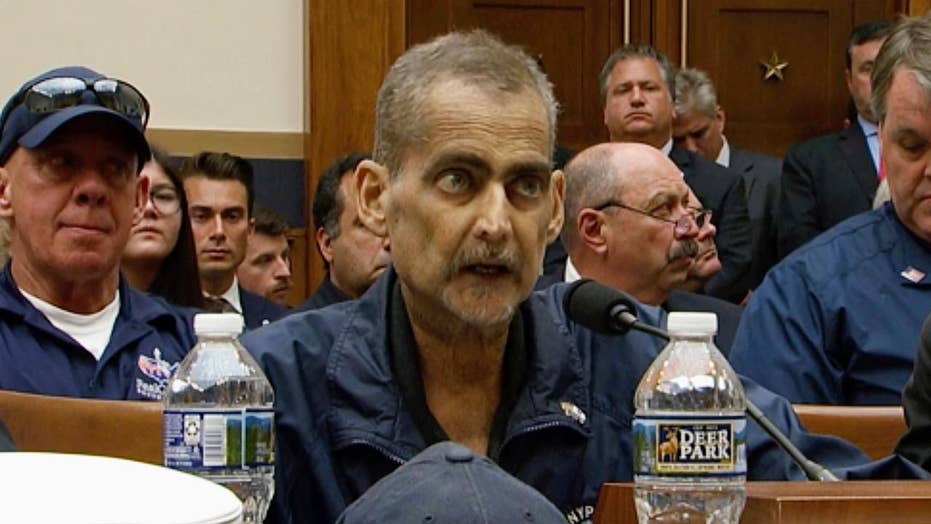 Originally supplied with over $7 billion to compensate September 11 victims, first responders and surviving families, the fund has been rapidly depleted after a rash of new claims; Doug McKelway reports from Washington.

The House on Friday overwhelmingly passed a bill to reauthorize the compensation fund for victims of the Sept. 11, 2001 terrorist attacks, after comedian Jon Stewart lambasted lawmakers for not moving quickly enough to replenish the critical funding.

It comes as the $7 billion 9/11 Victims Compensation Fund is being depleted and has cut benefit payments by up to 70 percent.

The bill -- which passed in the House 402-12 -- would ensure the fund can pay benefits for 70 years. It now heads to the Senate, where Majority Leader Mitch McConnell has agreed to call a vote.

“The first responders who rushed into danger on September 11th, 2001 are the very definition of American heroes and patriots," McConnell said Friday. "The Senate has never forgotten the Victim Compensation Fund and we aren’t about to start now. Nothing about our shared goal to provide for these heroes is remotely partisan. We will consider this important legislation soon."

Among the most outspoken supporters of the legislation has been Stewart, who criticized congressional leaders for failing to ensure that the victims' fund, set up after the 2001 terrorist attacks on New York and Washington, remains funded.

During a press conference on Capitol Hill Friday with lawmakers and 9/11 first responders, Stewart called the House’s passage of the bill the “semi-final” and said the “finals” are in the Senate.

Even the run-up to the vote was marked by tragedy. One 9 /11 first responder -- former NYPD bomb-squad detective Luis "Lou" Alvarez – died two weeks after an emotional appearance on Capitol Hill with Stewart. Alvarez was diagnosed with colon cancer in 2016 and underwent 69 rounds of chemotherapy.

Some lawmakers have expressed concern about how to pay for the program. Georgia Rep. Doug Collins, the ranking member of the House Judiciary Committee, said Friday he supported the bill but lamented how the bill doesn’t specify how it would be funded.

“Sadly, this bill comes to the floor without any provision to pay for the program,” Collins said. “No provision at all. This bill, according to the Congressional Budget Office, will cost $10.2 billion, and that’s just during the first decade of the seven decades this bill extends the program.”

The collapse of the World Trade Center in September 2001 sent a cloud of thick dust billowing across Lower Manhattan. Fires burned for weeks. Thousands of construction workers, police officers, firefighters and others spent time working in the soot, often without proper respiratory protection.

In the years since, many have seen their health decline, some with respiratory or digestive-system ailments that appeared almost immediately, others with illnesses that developed as they aged, including cancer.

More than 40,000 people have applied to the September 11th Victim Compensation Fund, which covers illnesses potentially related to being at the World Trade Center site, the Pentagon or Shanksville, Pennsylvania, after the attacks. More than $5 billion in benefits have been awarded out of the $7.4 billion fund, with about 21,000 claims pending.

Fox News’ Chad Pergram and Andrew O’Reilly and The Associated Press contributed to this report.

Alex Pappas is a senior politics editor at FoxNews.com.聽