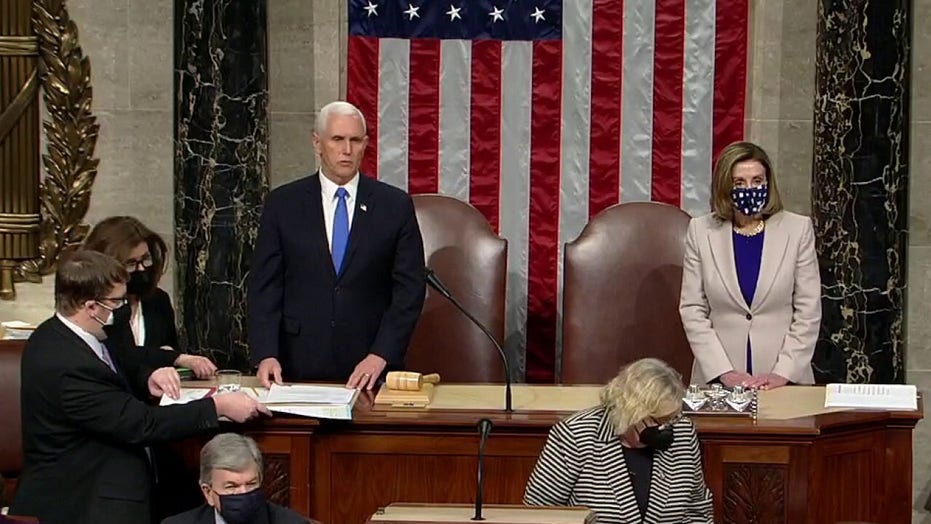 Sen. Josh Hawley Monday slammed the Democratic senators who filed an ethics complaint against him and Sen. Ted Cruz over their Electoral College objections on Jan. 6 -- and continued to defend his decision to object to electoral votes during the joint session to certify President Biden's Nov. 3 win.

Hawley aired his grievances in two letters sent Monday morning. In one of the letters, Hawley, R-Mo., called for the Senate Ethics Committee to investigate the seven Democrats who filed the complaint against him and Cruz, R-Texas, accusing the senators of filing "an unprecedently frivolous and improper ethics complaint... [w]ithout citing any relevant evidence or offering any good-faith argument."

Hawley on Jan. 6 joined a House member's objection to the Pennsylvania Electoral College votes, triggering two hours of debate in each chamber over the validity of the slate and votes on whether Congress should reject them. Cruz objected to Arizona's electors.

"The complaint against me does not suggest that my objection to Pennsylvania’s electoral votes was legally improper. No Senator could make such a suggestion with a straight face. Federal law expressly authorizes Senators to object that a State’s electoral votes were not 'regularly given,'" Hawley says in his letter to the Ethics Committee. "Democrats have repeatedly invoked this provision. Indeed, in every presidential election since 2000 that a Republican has won, Democrats have sought to object to electoral votes on that ground, regardless of whether any good-faith basis existed for such objections."

Hawley further defended his decision to object to Pennsylvania's electoral votes as having a "strong legal basis."

The objection followed the Jan. 6 storming of the Capitol by a pro-Trump mob after former President Donald Trump held a fiery rally in Washington, D.C., earlier in the day.

The mob forced hundreds of lawmakers and former Vice President Pence into hiding, ransacked the building and was the worst encroachment on a U.S. government institution since the British burned the Capitol during the War of 1812. Before the day's violence, Hawley was caught in a photo raising his fist toward a pro-Trump group at the Capitol in an apparent gesture of solidarity.

Hawley and Cruz condemned the violence, as did Trump. But the former president was impeached in the House of Representatives for his role in stoking the crowd. The ethics complaint against Hawley and Cruz, meanwhile, says that Cruz and Hawley "lent legitimacy to President Trump's false statements" and "to the mob's cause."

Sen. Josh Hawley, R-Mo., left, and Sen. Ted Cruz, R-Texas, right, speak after Republicans objected to certifying the Electoral College votes from Arizona, during a joint session of the House and Senate to confirm the electoral votes cast in November's election, at the Capitol, Wednesday, Jan 6, 2021. (AP Photo/Andrew Harnik)

"While it was within Senators’ rights to object to the electors, the conduct of Senators Cruz and Hawley... went beyond that. Both senators announced their intention to object to the electors after baseless claims of election fraud, which upon information and belief they knew to be baseless, had led to threats of violence," the Democrats' letter said. "Their actions lend credence to the insurrectionists’ cause and set the stage for future violence.  And both senators used their objections for political fundraising."

The Democrats' complaint also raised questions about whether there was "communication or coordination between Sens. Hawley and Cruz and the organizers of the rally."

Hawley, a firebrand senator who has enthusiastically embraced Trump's brand of populism and is considered to be a potential 2024 presidential candidate, railed against the Democrats for that specific accusation. He said their complaint was a "manifestly partisan exercise" and called for an ethics investigation into the Democrats who filed the complaint against him and Cruz.

"Most astonishingly, the Democrats who filed the complaint against me insinuate—without any evidence whatsoever—that I or my staff may have conspired with the criminals who stormed the Capitol," Hawley said. "In most jurisdictions, such statements would constitute defamation per se, and if offered during debate they would constitute a clear violation of Senate Rule XIX.2."

Hawley specifically asked the Ethics Committee to investigate whether the seven Democrats had coordinated with a handful of outside groups, Democratic leadership, including the Biden administration, and whether or not they've been in contact with lobbyists and corporations who have said they will no longer donate to Hawley or Cruz.

There's no evidence in Hawley's letter for any of those accusations, although some outside groups did have very fast public responses set up following the release of the Democrats' complaint against Hawley and Cruz.

Hawley also sent a letter directly to the Democrats who filed the complaint against him, accusing them of adopting a "woke-mob mentality that you should cancel anyone who disagrees with your views." He said the accusation that he and Cruz may have worked with the insurrectionists was "shamefully false. And you know it to be so."

"In light of the shameful abuse of the ethics process you have deliberately engaged in, I have considered whether I should call for you to resign or be expelled from the Senate," Hawley also said. "But I continue to believe in the First Amendment, which the US Supreme Court has repeatedly said protects even 'offensive' and malicious speech, such as yours."