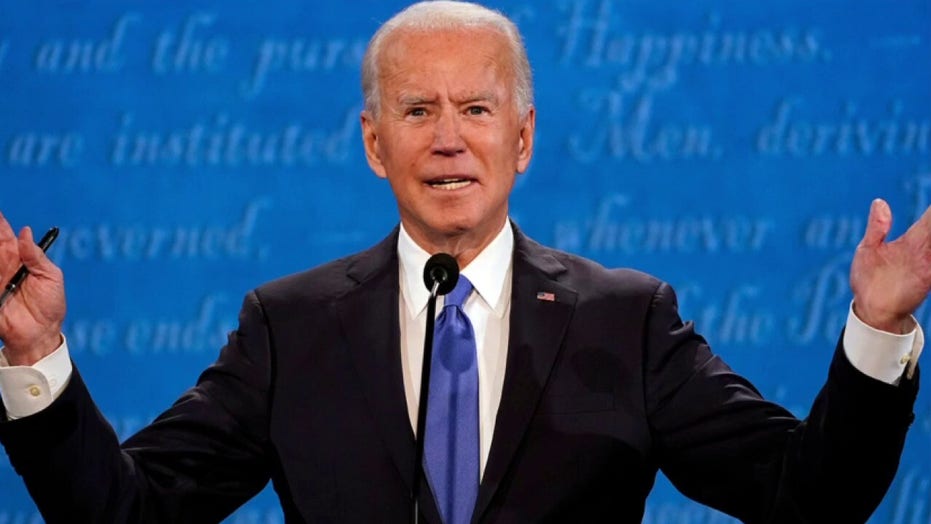 Editor's Note: This article is adapted from Tucker Carlson's opening commentary on the Oct. 23, 2020 edition of "Tucker Carlson Tonight."

We learned a lot over the course of Thursday night's second and final presidential debate. We learned that self-control pays off. Donald Trump pulled back a little bit on stage and he was never better than he was Thursday night.  At the same time, we learned that if you really want to wreck Joe Biden, let him talk without a script for two minutes at his age.

We also learned something that we already knew: Donald Trump drives a certain sort of person completely insane. He could recite the words from the "Happy Birthday" song and these people would hear machine gun fire. These are highly neurotic individuals; you get the sense many of them have severe allergies and digestive problems. For example, at one point during the debate, the president tried to explain why the human smuggling of children into the United States is a bad thing. Here's what he said:

TRUMP: Children are brought here by coyotes and lots of bad people, cartels, and they're brought here and they used to use them to get into our country.

Again, human smugglers -- coyotes, as they're often called along the border -- bring children into this country illegally, sometimes without their parents. That's true, and that's what the president said. What a lot of prominent Trump-haters heard was that huge feral canines were dragging children across the Sonoran Desert. And, of course, they didn't believe a word of it.

BIDEN SAYS HE AND OBAMA 'MADE A MISTAKE' ON IMMIGRATION POLICY

Dar'shun Kendrick is an elected Democrat in the state of Georgia. She's one of her party's leaders in the State House there, and she wasn't buying it for a second. "How the hell does a coyote bring a whole human across the border?" she wondered on Twitter. You should know that Dar'shun Kendrick is an attorney and a self-described investment adviser. You're going to want to hand your retirement portfolio to her as soon as you can.

At one point, Joe Biden told us that hundreds of these children brought here by coyotes, possibly dragged, have been separated permanently from their parents by the Trump administration, which hates families -- 545 children, to be exact. Now, if you believe that was true, you'd be upset about it.

You'll be happy to know it's not true. It's not even close to true. The vast majority of the parents of these children have been located by federal authorities and they are refusing to reunite with their children. A Department of Homeland Security spokesperson says that in one lawsuit currently pending, the plaintiffs have been able to contact the parents of 485 children separated at the border and yet "they've yet to identify a single family that wants their child reunited with them in their country of origin."

In many cases, the parents in question are not in the United States. They're still back home in their country of origin, usually in Central America. In some cases, they never even tried to come to the United States. Instead, they set their children up with someone else, a coyote possibly, to bring them here.

The evidence is clear. All the people howling about children in cages and family separations have no idea what they're talking about or don't care. And of course, they have no answers to the problems they claim are plaguing their consciences. Their solution is let anyone with a child gain immediate access to this country. What would that do? The U.S. would be flooded by millions of new people instantly. But it would also encourage more human smuggling, a huge amount of human smuggling, which is odd since everyone pretends to be against human smuggling, but apparently not everyone is.

Everyone used to pretend to be against crime, too. In the 1980s and 1990s, crime was one of the biggest issues in this country. It defined people's lives, where they lived, where they worked. It changed election results every year. Was America a more racist country back then? No, not really. There was just an awful lot of crime in the 80s and 90s. Look it up. There was a huge amount of crime and a lot of it was driven by drugs, particularly crack cocaine. That's real. It actually happened to anyone who was alive then.

Joe Biden was alive then -- he was a middle-aged man then -- and his constituents asked him to help fix the crime problem. So, like virtually everyone else in Washington at the time, Joe Biden voted to stiffen drug penalties. That was an enormously popular thing to do in the middle of a drug epidemic and the murder epidemic that inevitably followed. It was popular with people in Black neighborhoods, who were suffering the most. But now Joe Biden is pretending it was all a big racist mistake.

BIDEN: In the '80s ... All 100 senators voted for a bill on drugs and how to deal with drugs. It was a mistake. I've been trying to change it since then, particularly the portion on cocaine. That's why I've been arguing that, in fact, we should not send anyone to jail for a pure drug offense. They should be going into treatment across the board. That's what we should be spending money [on]. That's why I set up drug courts, which are never funded by our Republican friends.

The bill that Joe Biden just referred to passed in 1986 and it passed the United States Senate with 97 votes. That bill was co-sponsored by the then-chairman of the Congressional Black Caucus. The House approved it by a 376-vote margin. And then the Senate passed Joe Biden's 1994 crime bill, which he's also called a mistake, with an overwhelming bipartisan majority. The majority of the Congressional Black Caucus supported the crime bill. They're now telling us it was written by the Klan (and by the way, Republicans are saying that too, mindlessly).

Joe Biden knows that these bills weren't mistakes. We don't put people in jail in this country for being Black. People go to jail for committing crimes. Not all of our anti-crime laws are smart. But the bill wasn't written to punish an ethnic group. It was written to control what was a very real problem, including in Black neighborhoods, and that was drug-fueled crime. People were dying from it in big numbers in 1994.

Not only is Joe Biden now telling us these crime bills were mistakes, now he's telling us that any law that puts any drug offender in prison is a mistake. Would that include the opioid dealers who haveve killed hundreds of thousands of Americans in recent years? Apparently, they won't go to jail. So what's going to happen when we stop trying to punish opioid dealers and instead send them to some useless rehab program? What's the success rate in rehab programs? Does anyone ever mention that? Do these people know anything? It would be nice to know what the consequences might be before that happens. But of course, no one asked Thursday night.

Which brings us to the HEROES Act, which exists to help people with the coronavirus. Republicans, needless to say, are against that because they support the coronavirus.

So what exactly is the HEROES Act and what does it do? Among other things, the HEROES Act would allow illegal immigrants to retroactively receive coronavirus stimulus checks. People who are here illegally would get tax dollars retroactively. The bill contains a prison break provision, allowing inmates with asthma or diabetes to get out of jail. It bans voter ID laws, because of course it does. It also allows marijuana businesses and their service providers access to banking and insurance services. The bill would bail out left-wing jurisdictions that had financial problems going back many decades, long before coronavirus. And of course, the bill would allow paid political operatives to collect ballots in bundles and return them to polling stations. Ballot harvesting, but not just in California.

So consider those provisions and ask yourself, who exactly do they help? Americans who haveve lost their jobs because of the lockdowns? Small business owners trying to save their livelihoods? The ones Joe Biden told to put up some Plexiglass? Those people aren't the intended beneficiaries of this legislation. Instead, the bill helps the Democratic Party, which looks across our land and sees the destruction wrought by these lockdowns -- the suicides, the depressions, the spiking overdoses -- as a political opportunity for them. Last night, Joe Biden urged Americans to prepare for a "dark winter."

Be afraid, Joe Biden says. Now, "be afraid" has been the message of the Democratic Party for the entire year. But Thursday night, Joe Biden made it totally explicit.

At this point, we should mention that this virus has a 99.9% percent survival rate for the vast majority of Americans. The lockdowns, on the other hand, hurt everyone. The economic and psychological costs of them are, in many cases, irreversible. Thousands of businesses will never come back. The families that own those businesses are destroyed even as Google and Amazon get stronger.

And what about our children? Students who have already spent a year away from school are now preparing to stay away from school indefinitely and they're learning nothing. If you're a parent, you know that, but many studies have shown the same thing. And yet in Fairfax, Va., and other places, the teachers unions want schools closed until at least August of 2021. Classes should be virtual until a proven vaccine is "widely available." That's insanity.

Schoolchildren face almost no risk of death from this. That's not an exaggeration. But Joe Biden essentially endorsed that plan last night, saying, "Do not open until you get this under control."