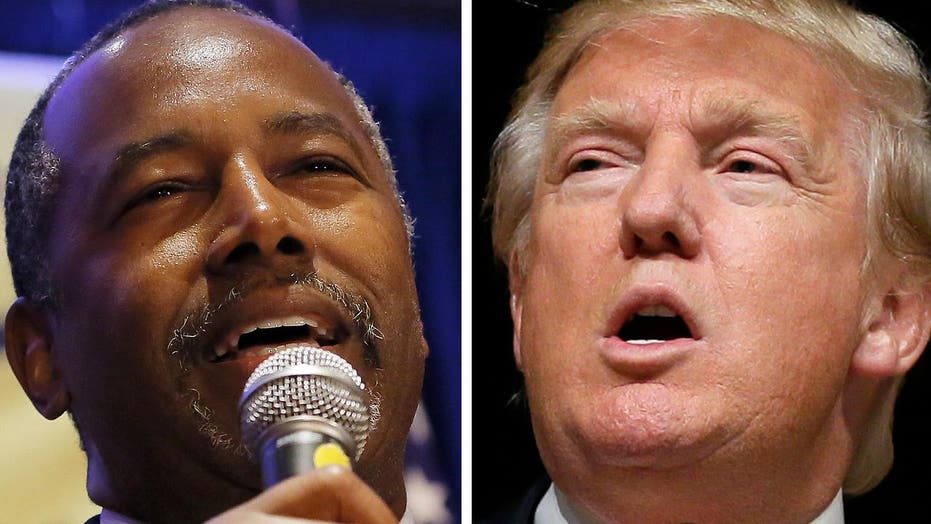 Dr. Robert Jeffress weighs in on why faith matters in politics

If you want an in-depth analysis of where we are in the 2016 race for the GOP nomination, I suggest you download the 1972 film “The Thing With Two Heads.” This high-camp cult classic stars veteran actor Ray Milland (in what was the indisputable low point of  his career) as a dying brain surgeon who arranges to have his head surgically transplanted onto the body of the first available healthy person—who  happens to be a falsely accused death-row inmate played by football great Rosey Greer.

The usual explanation by pundits is that these two men’s “outsider” status has propelled their popularity. Because both Carson and Trump have never been professional politicians, they are not shackled by political correctness or joined at the hip with special interest groups. But that is where the similarities end.   There are vast differences in their world-views, temperaments, life experiences, and even in their perceived spirituality. Yet they are garnering the lion’s share of the votes of the most conservative Christians in America. Why?

While no one is going to accuse The Donald of being overly pious, he is perceived by many evangelicals as someone who can tackle tough issues.

As different as Carson and Trump are, each one represents one-half of the equation of what evangelical voters are looking for in the next president: a committed Christian and a strong leader, which is why outsider Ben Carson is tied with Trump in national polls for evangelical voters and has zoomed past him in Iowa where you find some of the most conservative evangelical voters in the nation.

Ben Carson’s evangelical devotees are attracted to many aspects of the acclaimed surgeon’s character—but at the core of their support is Carson’s uncontested commitment to Christianity.   Secularists are always astounded that a large segment of Americans would care about a potential candidate’s faith.  Since faith is unimportant to the secularist, why should it be a concern of anyone’s? But for people whose faith matters--well--faith matters! Most evangelicals believe that a candidate’s faith—or lack thereof—profoundly impacts every area of his life, including  his world-view. Any candidate who professes to be deeply religious but says in the next breath that his faith would have no impact on how he would govern is either a superficial follower of his faith or a liar. If our faith is the most important part of our lives, then our religious views influence every other part of our lives, including our political views.

Ben Carson’s evangelical devotees are attracted to many aspects of the acclaimed surgeon’s character—but at the core of their support is Carson’s uncontested commitment to Christianity.

Ben Carson incited a major controversy when he suggested that he wouldn’t  be comfortable with a Muslim president. Some commentators and even Republican leaders accused Carson of being unfit to serve as president since his comments reflected an ignorance of Article VI of the Constitution which prohibits imposing a “religious test” for public office. Yet, anyone who understands the Constitution knows that Article VI refers to a governmental religious litmus test, not the preferences of individual voters.

Ben Carson—along with every American—is free to impose any litmus test he chooses, including a religious one. Interestingly, John Jay who was the first chief justice of the United States Supreme Court and co-author of the Federalist Papers, suggested that Americans utilize a religious litmus test that would give preference to Christian candidates: "Providence has given to our people the choice of their rulers and it is the duty, as well as the privilege and interest of our Christian nation to select and prefer Christians for their rulers.” More than two hundred years later, many Americans still believe that there are practical  reasons for selecting a committed Christian for president, which is why outsider Ben Carson is virutally tied for first place among  evangelical Republicans.

But the other “head” atop the evangelical body—Donald J. Trump—represents evangelicals’ equally strong desire for the next president to be a strong leader. Like most Americans, evangelicals believe that this nation is on the “wrong track” and are looking for someone who can fix the economy, solve the immigration debacle, and protect American security. Enter Mr. Trump.

While no one is going to accuse The Donald of being overly pious,  he is perceived by many evangelicals as someone who can tackle tough issues. Last week I was on a plane, seated next to a woman in her mid-sixties who identified herself as a Christian and explained her support for Trump: “I’m tired of all the B.S. (and she didn’t mean “Bible study”). I’m looking for someone who can get something done and Trump’s the guy who can do it.”  The next day on my return trip a young flight attendant knelt by the side of my seat and--when no one was looking--whispered, “Thank you for saying some positive things about Trump. I think he’s the only hope for our country.”

After criss-crossing the country for the past few months and talking to thousands of people, I’m convinced that there are a legion of “closeted” evangelical Trump supporters who are almost apologetic for being attracted to him. They are not under any illusion that Trump will be conducting Bible studies in the Oval Office, nor do they feel like they are abandoning their Christian values to support Trump. Instead, this time around, they are simply weighting “strong leader” more heavily than “committed Christian” in the presidential equation.

Which “head”—and the presidential qualifications each represents—will ultimately prevail over the evangelical body of voters? All I can say with any confidence is that like the movie “The Thing With Two Heads” this contest is incredulous, somewhat entertaining, and will be ultimately resolved with a “The End.”