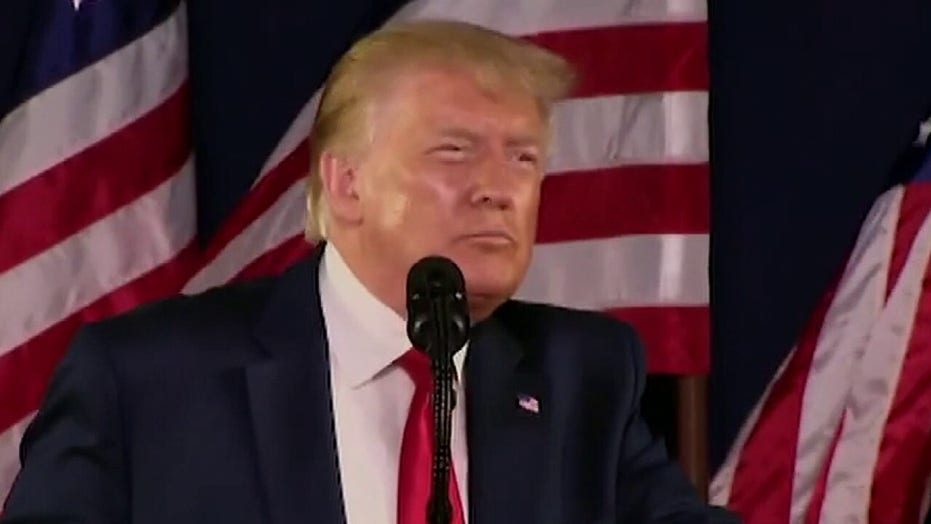 The Grand Canyon is a fitting metaphor for the difference between the uncensored version of President Donald Trump's Independence Day speech gleaned from live television and the feverishly distorted versions of his speech shown by the "reality-based press," as the leftist journo-braggarts call themselves.

Any American watching the live speeches would see positive and patriotic remarks, with some defiant words thrown in against the vandals who rip down statues and seek to "erase our history." But the "reporters" from our most pseudo-prestigious outlets, both print and broadcast, were churning out aggressive "news analysis," presenting two "dark and divisive" speeches by showing tiny little snippets that drain every carbonated ounce of Fourth of July feeling out of the event.        It's quite a contrast from five years ago, when CNN and MSNBC aired hours of live Trump speeches ... not because they liked him; they hated him. It's because the Democrats figured this was a fiendishly clever way to cripple the Republican half of the campaign.

Now President Trump is running for reelection, and CNN and MSNBC turned in the opposite direction. When the president traveled to Tulsa, Okla., for his first indoor rally in months on June 20, MSNBC showed its viewers only 3 minutes and 45 seconds of Trump's patter, or 3.7 percent of the 101-minute speech. CNN aired even less, clocking in at only 3 minutes and 25 seconds, or 3.4 percent. The network hate-talked over the rest of the event.

On July 3, Trump stepped to the microphone under Mount Rushmore at 10:50 p.m. Eastern time and spoke for 42 minutes. MSNBC only aired 4 minutes and 44 seconds, about 11 percent of the speech.

In the early evening of July 4, the president spoke from the south lawn of the White House for 29 minutes. MSNBC offered 8 minutes of live coverage.

CNN chief Jeff Zucker seems to be suggesting that this president is so loathsome, his lies so terrible, that letting him speak live on his 24/7 talk channel is some kind of offense against democracy and truth. Trump was gloriously newsworthy as a bombastic candidate who would ruin Jeb Bush. He's not newsworthy as president.

This is quite a contrast with Joe Biden's first press conference in 89 days on June 30. CNN and MSNBC carried the whole 50-minute shebang live ... and so did Fox News. Fox covered all these Trump and Biden events live.

The greatest and most obvious media distortion is the notion that the president is poisonously stoking a one-sided "culture war," and that everyone on the left is a model of unity and civil discourse. No one is ripping statues down; no one is rioting in the streets; and no one says anything "dark and divisive" about how America is only exceptional in the overactive imaginations of white nationalists -- that's the impression left by your "reality-based press."

PBS reporter Yamiche Alcindor announced on MSNBC that Trump was "fitting in this history that is, in some ways, a Republican history about the idea that they're really looking at white resentment ... President Trump is saying, 'I want to be on the side of the myth of America.'"

CNN weekend anchor Ana Cabrera labeled the Mount Rushmore speech "incredibly divisive" and lamented that on "such an important day for all Americans ... the president has still continued to really only speak to his base, not to all Americans this holiday weekend."

That's unintentionally hilarious ... because CNN refused to let him speak to its "base."

Tim Graham is the Executive Editor of NewsBusters.org and co-author with Brent Bozell of聽"Unmasked: Big Media鈥檚 War Against Trump."