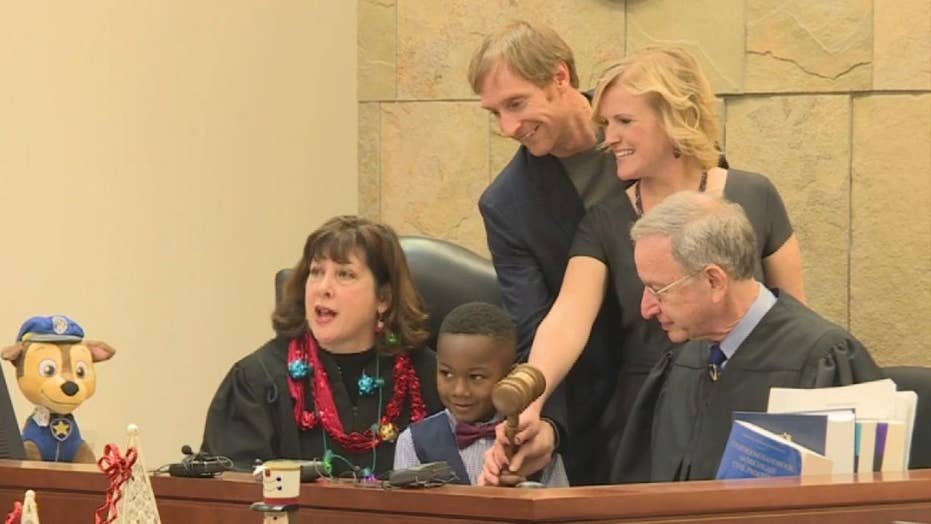 Young boy invites his kindergarten class to his adoption

It’s always intrigued me how often our joys in life are so closely adjacent to our sorrows.

Maybe that’s why I’ve resonated so well with the late Jean Shepherd’s perennial holiday classic, "A Christmas Story" – a delightful film based on his book of nostalgic essays, "In God We Trust – All Others Pay Cash."

“Sometimes, at the height of our revelries, when our joy is at its zenith when all is most right with the world,” Shepherd wrote and then narrated in the movie, “the most unthinkable disasters descend upon us.”

PAUL BATURA: MY CHANCE MEETING WITH RUSH LIMBAUGH RESULTED IN THIS CAREER ADVICE THAT CHANGED MY LIFE

Ten years ago this week, my wife, Julie, and I, along with our then 5-year-old son, Riley, were riding high over the birth of a beautiful boy. We had been matched in an adoption earlier that spring with his birth mother and had walked with her through the last half of the pregnancy.

But three days after the little guy’s arrival, Mandy changed her mind. We were deeply disappointed, of course, but tried to understand and appreciate the excruciatingly difficult decision a woman faces when making an adoption plan.

I like to call our middle son, “Will the Thrill” – as much because he brings us so much excitement – but also because his wonderful life reminds us all how thrilling things can be when we stop playing it safe and take good risks for the good of ourselves and others.

Riley was especially heartbroken. He had been praying for years each night for a brother or sister. With a stiff upper lip, we tried to reassure him that God’s plans were better than ours, and that a match with another child could happen at any moment.

I believed what I was saying – but I was still struggling inside with it all. My personal pity party involved wondering why so many families seemed to just happen while the formation of ours felt like a constant struggle involving miscarriages, unsuccessful fertility treatments – and multiple failed adoptions.

Just three days later, though, we received a phone call from the adoption agency. A baby had been born the night before in Denver to a young, single woman who had decided she wanted to make an adoption plan. She asked for a list of agencies and chose ours because it had the word “Christian” in the name. But it wasn’t a straight-forward situation.

In retrospect, adoptions rarely are.

It would be what’s known as an “at-risk” placement because the whereabouts of the baby’s father was unknown. Should he or a member of his family emerge over the course of the next few months and express a desire to parent, we would need to relinquish the baby.

My heart sunk. Here we go again, I thought. I could just see the sad scene unfolding all over again.

To her credit, Julie immediately said yes, but I wasn’t so sure.

“This is what we’ve been praying for,” she tried to remind me. “That little guy is all alone, and he needs somebody. We can be that somebody.”

After more conversation and prayer, we decided to go for it.

Less than 24 hours later, we were on our way up to Denver from Colorado Springs to receive our new son -- for however long we might be allotted. We cried the minute we saw him, so small and so sweet.

Will Batura as a baby

We named him “Will” and on the way back home, Riley lulled him to sleep by singing “Amazing Grace” while sitting beside the baby carrier in the backseat.

The next few months of uncertainty were action-packed. Only a few weeks after receiving Will, he required emergency surgery for pyloric stenosis, a life-threatening condition that prevents proper nutrition.

As required by law, a notice of Will’s birth was published in a local paper, inviting biological relatives to come forward. We held our breath throughout the period of legal jeopardy.

In the end, nobody ever came forward, and Will officially became our son in early 2011.

In hindsight, the risk was well worth all the worry, of course, though from a theological standpoint, I’m a bit conflicted over the anxiety I experienced each day as we sweated out the process.

If I truly believe God is in control, which I do, shouldn’t I be at peace as I await the revelation of His will? Doesn’t He know what he’s doing?

It was the late Dutch Christian watchmaker Corrie ten Boom, once imprisoned at a World War II concentration camp for helping Jews escape from the Nazis, who wrote, “There is no panic in Heaven. God has no problems, only plans.”

An omniscient God ultimately knows how we will choose, but He still gives us the freedom of choice. We could have turned down Will’s placement. I’m so relieved we didn’t.

Risk is part of adoption, but it’s also part of raising biological children. It’s part of marriage, work, school – even stepping outside into the neighborhood, COVID-19 or not.

I’ve been convicted in my own life to take more risks. Not foolish ones, but maybe some that take me outside my comfort zone.

As the actor Denzel Washington once said, “You may have the talent to succeed – but do you have the guts to fail?”

Will is a gift from God, but he’s also the result of a gutsy, beautiful birth mom named Joli who risked the pain of separation to give her son a new home with a different mom and dad.

Ten years later, as we approach his 10th birthday tomorrow, I like to call our middle son, “Will the Thrill” – as much because he brings us so much excitement – but also because his wonderful life reminds us all how thrilling things can be when we stop playing it safe and take good risks for the good of ourselves and others.