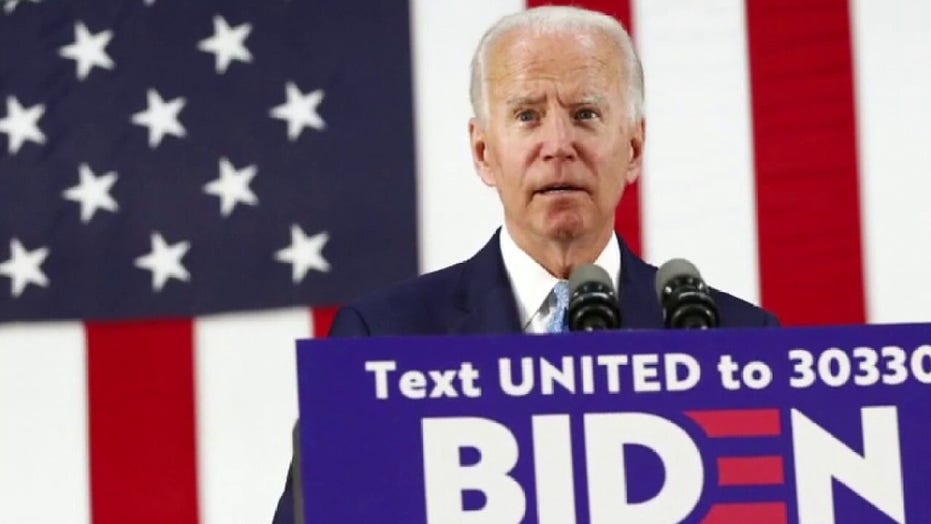 Voters have a clear choice this November.

If you want mobs vandalizing stores, destroying public property and setting churches on fire, then vote for Democratic candidate Joe Biden, who has spent the majority of his time hiding out in his Delaware basement while our country has been in flames in the aftermath of the George Floyd tragedy.

If you scroll through Uncle Joe's Twitter feed from the past several weeks, you'll notice he hasn't condemned the burning of St. John's Episcopal Church by violent protestors. He hasn't denounced the heinous assaults and killings of police officers that have taken place throughout the country. Nor has he said a peep about the brutal murder of civilians -- including teenagers -- shot and killed in the Seattle CHOP zone controlled by armed left-wing anarchists. And he certainly hasn't called upon Democratic mayors and governors to get their ransacked cities and states under control.

TRUMP SWIPES AT BIDEN, SAYS TAX HIKES WOULD TANK MARKET: '401KS WILL DROP DOWN TO NOTHING'

The stark reality is that Democrats today would rather appease anarchists, looters and violent criminals than uphold law and order.

Make no mistake. Republicans who elected Donald Trump are just as horrified by the appalling death of George Floyd as Democrats. We want police reform so that type of excessive force never happens again. That we can all agree on. Conservatives also support peaceful protests of any kind. But where conservatives draw the line is arson, mayhem and murder, which are antithetical to a civilized society.

Loudly and clearly, President Trump has condemned the mob's violent destruction and murder of police officers. In early June, he tweeted his respects for David Dorn, a 77-year-old African American retired police officer who was killed in the line of duty: "Our highest respect to the family of David Dorn, a Great Police Captain from St. Louis, who was viciously shot and killed by despicable looters last night. We honor our police officers, perhaps more than ever before. Thank you!"

The president has also taken action against those who deface America's historical monuments. On Wednesday, he tweeted: "My Executive Order to protect Monuments, Statues etc., IS IN FULL FORCE AND EFFECT. In excess of a 10 year prison term. Please do not put yourself in jeopardy. Many people now under arrest!" The president has also threatened to use military force, if necessary, to break up violent protests.

Undoubtedly, Trump is our "law and order" president, and, thankfully for our nation, he's also our jobs president who's succeeding, once again, in creating millions of jobs.

The jobs report released Thursday smashed expectations, with the creation of over 4.8 million new jobs in June. That welcome news follows 2.5 million jobs added in May as the economy continues to rebound under Trump's leadership post-lockdown.

But that's not all. After years of negotiations, the president just inked the United States-Mexico-Canada Agreement on Monday, benefitting America's farmers and car manufacturers. The International Trade Commission estimates it will create up to 589,000 new American jobs.

So, while Democrats are defunding the police and turning a blind eye to the mob's criminal destruction in cities nationwide, Trump is bringing back millions of jobs and increasing wages for union workers.

The USMCA requires that 40% to 45% of car vehicles are built by laborers making at least $16 an hour. The historic trade agreement also stipulates that 75% of qualifying cars must now be manufactured in America, reducing the outsourcing of parts to other countries -- a win for America and the forgotten men and women who finally have a president fighting for them.

When voters cast their ballots in November, they'll choose between a president that's creating jobs and Joe Biden, a career politician, who tiptoes around the mob. The choice is clear.