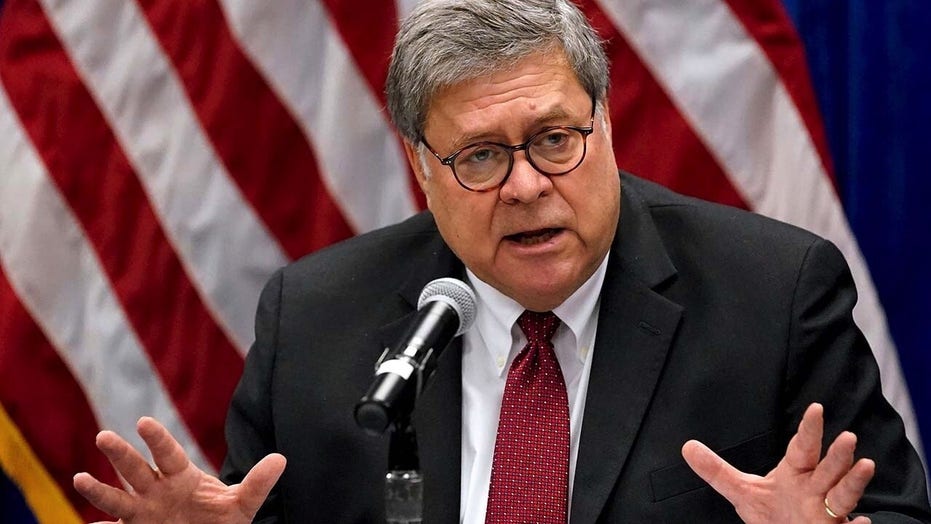 Fox News contributor Andy McCarthy reacts to the DOJ announcing it has not found voting fraud in the 2020 presidential election that would change the outcome.

As President Trump intensifies his election-fraud rhetoric, we are witnessing some serious Republican-on-Republican violence.

Not the fisticuffs kind, although a couple of Trump allies have resorted to violent imagery in their rhetoric. But in terms of verbal warfare, a president who remains very popular in his party has taken to denouncing fellow Republicans who aren’t saluting his orders when it comes to the contested election.

Trump’s own attorney general, Bill Barr, essentially broke with the president yesterday. A lifelong Republican who also held the job under the senior George Bush, Barr told the AP that his investigators hadn’t found much. “To date, we have not seen fraud on a scale that could have affected a different outcome in the election,” he said.

Trump’s lawyers responded with an “all due respect” statement, complaining that DOJ hasn’t interviewed the witnesses they’ve found, issued subpoenas or audited voting machines. “There hasn’t been any semblance of a Department of Justice investigation,” Rudy Giuliani and Jenna Ellis said.

Barr later visited the White House for a previously scheduled Trump meeting. It’s hard to avoid the conclusion that Barr, so often criticized for carrying Trump’s political water, did not want to further mar his reputation with bogus allegations.

Trump, of course, was an outsider who beat 16 standard-issue Republicans and effectively completely a hostile takeover of the GOP. He feels no particular loyalty to party orthodoxy and has a history of trashing those who displease him, from his own appointees like Jeff Sessions to such congressional critics as Jeff Flake and Ben Sasse.

And by amping up his charges that Joe Biden stole the election, his latest fundraising pitches have brought in $170 million, much of which can be used by a PAC to finance his future activities.

For the last four years, most Republican politicians have avoided criticizing Trump, even after highly controversial comments or actions, knowing full well he could knock them off by backing a primary challenger. They have routinely deflected reporters’ questions, said they were unfamiliar with the matter, or just stayed silent.

But the election has put Republican state officials in a box. They have had to choose between backing the president’s unproven fraud allegations and doing their jobs. They are legally required to certify their state elections unless there is evidence of widespread cheating, and silence is not an option.

Trump’s latest high-profile target is Brian Kemp, Georgia’s Republican governor, who the president now pronounces himself “ashamed” of endorsing him.

Kemp’s sin? He has defended his state’s electoral machinery and Biden’s win by more than 12,000 votes.

Trump tweeted yesterday: “Do something Brian Kemp. You allowed your state to be scammed. We must check signatures and count signed envelopes against ballots. Then call off election. It won’t be needed. We will all WIN!”

What the president is saying here is that Kemp should cancel the two runoff races that will decide control of the Senate. If Democrats can somehow defeat Kelly Loeffler and David Perdue in January, they will be running the chamber.

Trump is saying there is no need for the runoffs because the alleged fraud that he says cost him the state would also show Loeffler and Perdue winning by sufficient margins. Some Georgia Republicans are openly worried that Trump’s attacks on the state’s vote-counting will prompt enough of their voters to stay home to hand the seats to the Democrats.

Kemp isn’t the only Georgian feeling Trump’s wrath. He has slammed Secretary of State Brad Raffensperger, also a Republican, for not finding substantial election fraud, despite a hand recount in the state.

Raffensperger, who has drawn death threats, has been outspoken, telling reporters that he has been investigating such allegations but that “dishonest actors” are not telling the truth.

“There are those who are exploiting the emotions of many Trump supporters with fantastic claims, half-truths, misinformation, and frankly they are misleading the president as well apparently,” Raffensperger said.

Trump has demanded that the “hapless” governor use his emergency powers to overrule Raffensperger, saying “Get it done!” Kemp says he has no such authority.

Doug Ducey, Arizona’s Republican governor, has also become a major Trump target. “We do elections well here in Arizona,” Ducey declared Monday as he signed a certification of Biden’s victory in the state.

The president, not surprisingly, disagrees. “We’re going to win this,” Trump says. “Arizona won’t forget what Ducey just did.”

In fact, Trump called into a Phoenix event with GOP lawmakers earlier in the day, calling the national election the “greatest scam ever perpetrated against our country.”

POTUS also complained on Twitter that Ducey was “rushing to put a Democrat in office, especially when so many horrible things concerning voter fraud are being revealed.” That was a reference to the governor facilitating an early swearing-in for former astronaut Mark Kelly, which will give him a slight seniority edge in the Senate.

There was a scene during Ducey’s certification of the Biden victory that could have been taken from a movie. As the governor was speaking to reporters, his cellphone went off with a special ringtone, “Hail to the Chief.” President Trump was calling. Ducey kept on talking, ignoring the call.