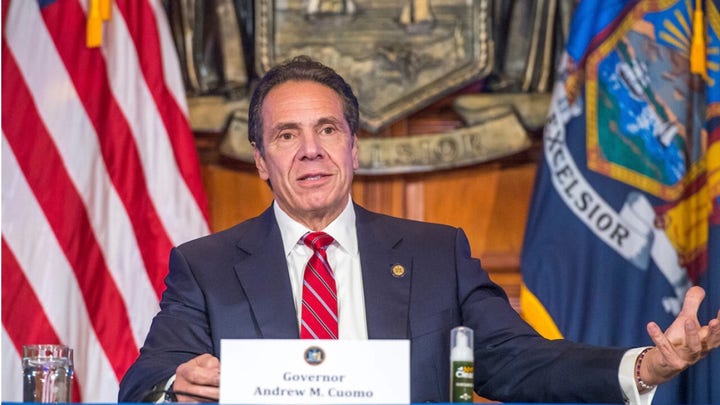 Members of the mainstream media have described Sen. Ted Cruz's ill-timed vacation to Cancun amid the weather crisis plaguing his home state of Texas as a comparable "scandal" to the growing legal woes Democratic New York Gov. Andrew Cuomo is facing over the alleged cover-up of nursing home deaths in his state.

Over the weekend, The New York Times ran the headline, "Cruz and Cuomo Face Scandal. Trump Can’t Save Them," detailing how the news cycle once dominated by the now-former president cannot divert attention from other political controversies. The story lumped Cruz's aborted getaway with Cuomo's handling of nursing homes.

"For much of the past six years, former President Donald J. Trump has dominated the political conversation, prompting days of outrage, finger-pointing and general news cycle havoc with nearly every tweet. The audacious behavior of other politicians was often lost amid Mr. Trump’s obsessive desire to dominate the coverage," the Times wrote on Saturday. "Well, the former president has now gone nearly silent, leaving a Trump-size void in our national conversation that President Biden has little desire to fill. That’s been a rude awakening for some other politicians, who find themselves suddenly enmeshed in controversy that isn’t quickly subsumed in a deluge of Trump news."

"Saturday Night Live" lampooned both Cruz and Cuomo during the show's cold open this past weekend. The sketch featured the senator and governor, played by Aidy Bryant and Pete Davidson respectively, attempting to do damage control on a talk show hosted by Britney Spears.

On Sunday, ABC News correspondent Jonathan Karl similarly equated the two "scandals" while anchoring "This Week," suggesting that both had just emerged despite the fact that criticism of Cuomo's now-famous order placing COVID-positive patients in nursing homes began last spring when the order was enacted.

"This week, we also had our first post-Trump political scandals; Ted Cruz’s misguided trip to Cancun and the allegations of cover up and deadly mismanagement facing Andrew Cuomo," Karl told viewers while teasing the upcoming panel discussion.

Last Thursday, ABC's "World News Tonight" dedicated roughly four times as much airtime to Cruz's sojourn than the FBI and DOJ investigations into the Cuomo administration, devoting nearly four minutes to the GOP senator and just 55 seconds to the embattled Democratic governor.

That same night, CNN and MSNBC's primetime coverage was similarly dominated by the Texan. A whopping 46 minutes were devoted to Cruz's vacation, while fewer than three minutes were given to coverage of the prominent New Yorker.

On Friday, Politico's Playbook singled out Cruz's optics fiasco as proof that the "age of political scandal" is alive and well despite the turmoil the Cuomo administration has faced in recent weeks.

"A lot of observers wondered if the age of political scandal was dead — if partisans on both sides were so defined by hatred of their rival political tribe that they would let their own leaders get away with just about anything," it read. "And then a bearded man appearing to be Cruz was photographed with a roller bag at the United counter at Houston’s George Bush Intercontinental Airport ready to board a plane to Cancun."

A tweet from Politico promoting the Playbook read, "A lot of political observers wondered if the age of political scandal was dead. Ted Cruz proved this week that it isn't."