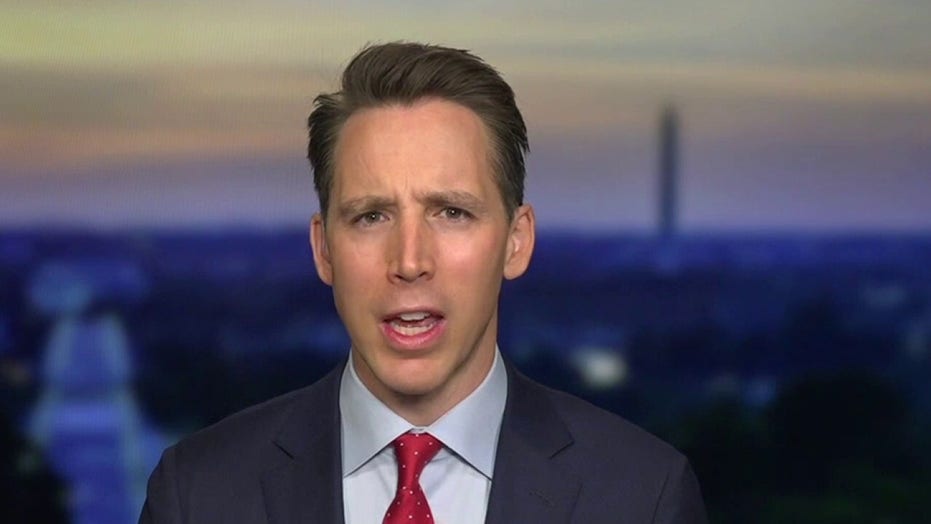 Josh Hawley is outraged over prosecutors mulling charges against St. Louis couple: It's an abuse of power'

Senator Josh Hawley is outraged over the investigation launched into the St. Louis couple who defended their home against protesters

The investigation into a St. Louis, Mo., couple who defended their home against protesters is "an abuse of power," Missouri Republican Sen. Josh Hawley stated Thursday.

In an interview on the "Fox & Friends" with host Brian Kilmeade, Hawley blasted circuit attorney Kimberly Gardner – the prosecutor spearheading the probe – pointing out that she has had "dozens of violent criminals referred to her by the St. Louis police and she hasn't prosecuted any of them. She hasn't even charged any of them."

"She's turned them back out on the streets," he accused.

ST. LOUIS COUPLE WHO BRANDISHED GUNS BEING INVESTIGATED AFTER CLASH WITH PROTESTERS

"And then you've got this couple who, by the way, are on their own property – they never left their property – just standing there with their perfectly Second Amendment right to keep their arms — standing right there. And, they're going to be investigated?" asked Hawley. "I mean, it's just insane."

On Sunday, Mark McCloskey, 63, and his 61-year-old wife, Patricia, went viral when they brandished firearms at a large group of protesters marching in front of their property on the way to the house of Mayor Lyda Krewson.

The homeowners told police the protesters broke a gate to get onto the private street, adding they only retrieved their firearms when they spotted “multiple” people who were armed, department records show.

“There were people wearing body armor. One person pulled out a loaded pistol magazine, he clipped them together and said, ‘You’re next,’” Mark McCloskey told NBC's "Today" Show Tuesday. “We were threatened with our lives, threatened with the house [being] burned down.”

Gardner, however, described the encounter as “a violent assault” against those exercising their First Amendment rights.

“I am alarmed at the events that occurred over the weekend, where peaceful protesters were met by guns and a violent assault,” Gardner wrote a statement Monday. “We must protect the right to peacefully protest, and any attempt to chill it through intimidation or threat of deadly force will not be tolerated.”

She said her office was working with the police department to investigate the confrontation, adding that authorities “will use the full power of Missouri law to hold people accountable.”

However, the McCloskeys' attorney, Albert Watkins, saw the couple's clash with protesters differently.

Under Missouri's Castle Doctrine, "a person has the right, has the absolute unmitigated right to protect his or her castle or family while on their property," Watkins said. "And in this particular fact situation, you have individuals who are acting on private property, trespassing as lawbreakers onto private property, damaging and destroying private property and acting in a threatening and hostile fashion, such as to give rise to what any human being would consider to be placing them in a position of abject horror and certainly in a position of feeling in fear of imminent harm."

Watkins insisted his clients did not arm themselves until the protesters entered their private property.

"My clients didn't sit on their front stoop with guns ... No firearms were on them at the time that they, were, as property owners standing in front of their home," he said. "It was not until they basically were in a position of seeing and observing violence, recklessness, lawbreaking, and knowing that the police were not going to be doing anything."

A couple draws their firearms on protesters as they enter their neighborhood during a protest against St. Louis Mayor Lyda Krewson, in St. Louis, Mo., on June 28, 2020, in this picture obtained from social media. (DANIEL SHULAR/via REUTERS)

But according to Hawley, the public sentiment shouldn't come into it when you're talking about the law.

"They felt that they were being threatened, the video shows folks on their property shouting threats at them," he told Kilmeade. "And, the truth is: they never left their property. I mean, they never went toward the crowd, got off the property – you know – waved the guns around to get them back on the street. They stayed right where they were which is their right to do."

"And, the idea that you wouldn't prosecute actual violent criminals who are shooting cops, who are burning buildings in St. Louis — those people don't even get charged yet you're going to investigate and maybe prosecute this couple? I mean, that's really an abuse of power," the senator concluded.